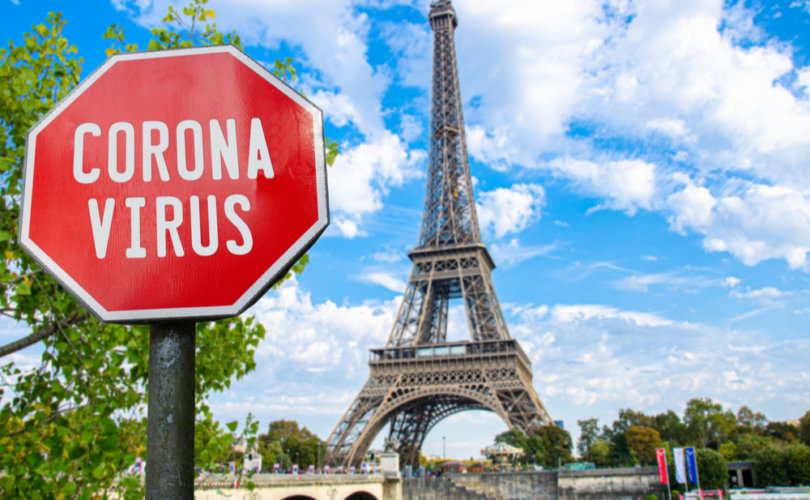 PARIS (LifeSiteNews) — A new French bill, if passed, will create what to all intents and purposes will be a COVID vaccine mandate. As COVID cases and deaths rose under colder temperatures, ever more alarming predictions were made last month on the part of the National Scientific Council tasked with recommending measures to “contain the pandemic.” New restrictions and requirements have been added or are on their way, accompanied by revealing statements from the authorities.

Since December 31, large cities such as Paris and some “départements” — administrative subdivisions of France — are requiring masks to be worn both inside and out, even by children as young as six, while alarmist rhetoric is warning about the omicron “tsunami.” Other measures, such as a ban on eating or drinking even in long-distance trains and the order only to eat and drink while seated in cafés and restaurants, come with heavy fines — 150 dollars-worth — and extra police crackdowns on the venues where the “sanitary pass” is compulsory.

Before Christmas, France’s Health Minister Olivier Véran chose the online media “Brut” — that mainly targets young people — to announce that “if a fourth dose” of the experimental injection is “necessary, or a fifth dose, if booster shots are needed in six months or one year, we’ll ask the French to take them, ‘in responsibility.’” Since then, the decision was made to allow people to obtain their third “booster shot” three months after their first two jabs, and making it compulsory within four months for those who wish to continue to benefit from their present sanitary pass as being “fully vaccinated.”

While Véran said on Sunday that the omicron variant was less dangerous than the previous “waves” and was possibly creating widespread immunity worldwide, and recognized that the virus was causing three times less “serious forms” of COVID-19 than delta, he pushed for the “vaccine pass” in France in order to pressure people into getting the jab without it being mandatory. According to an op-ed published Monday by Le Figaro, the government is acting thus in order to avoid being held accountable for serious side-effects of the COVID experimental injection.

Nor has the fact that omicron is widely infecting “fully vaccinated” individuals prevented the French government from pushing ahead with its “vaccine pass.”

As things stand, the government wants to impose new rules for the sanitary pass that has now been required for entry into restaurants and cafés, practicing and watching sports, cultural activities, museums, fast trains and public long-distance transports, visiting the elderly in nursing homes and going to hospital for visits or non-urgent treatment. A negative COVID test will no longer be accepted, and only the “vaccine” will give access to all these everyday activities, if the government has its way. Members of the LREM presidential party but also those of wide swathes of the “opposition” have already made clear that they will vote for the vaccine pass.

The situation of people who have not been vaccinated but have recovered from COVID during the last six months has yet to be discussed. And while the authorities are not planning to set up a vaccine pass requirement for work, they have suggested that parliamentarians could suggest new obligations via amendments when the bill comes under discussion. The debate is set to be rushed through parliament during the coming days and is already underway at the National Assembly this Monday.

In its present state, the government bill does not aim to require a vaccine passport for people undergoing ordinary healthcare in hospitals, but this could also be modified by the legislators. There have already been cases of cancer patients denied planned chemotherapy because it was materially impossible for them to obtain a negative antigen test less than 24 hours old.

If the government’s bill becomes law, the sanitary pass that has been in place since the beginning of August for all people over 18 will create a disguised vaccine obligation that is aiming to force all citizens to be constantly “fully vaccinated.” Since December 15, over-65s have lost their sanitary pass if they only received two doses more than six months prior, and as of January 15, adults with only two doses will lose theirs. All is in place for the vaccine passport to be in place indefinitely as new doses are required.

Surely, Véran has said it will be scrapped when “everyone is vaccinated, when everyone is protected.” But Véran has lied repeatedly about COVID measures, and the so-called “protection” offered by the “vaccine” is so flimsy that no one believes it any more. Only this Monday, the speaker of the National Assembly, Richard Ferrand, tested positive for COVID-19, as did Equality Minister Elisabeth Moreno.

Among Véran’s lies are his statement on August 26 that the third dose would “have no impact on the sanitary pass.” At the beginning of the COVID crisis, he repeatedly said that for the ordinary population, “wearing a mask is useless” (it is presently mandatory even for children in primary schools, even outside during recess).

On December 22, 2020, he stated that the “coronavirus vaccine” would “not be compulsory in order to enter a restaurant or using public transport, and obviously in order to go to work.” French health-workers and first responders have been obliged to have the jab since last September, and are suspended without pay or unemployment benefits if they resist.

Having first stated that there would never be a sanitary pass (January 2021), he said in June that the “sanitary pass’s objective was not to annoy people.” “I’m against transhumanism, I’m against a sanitary pass to go to a restaurant, no, we’re not setting up a system to sort people according to their sanitary system,” he insisted six months later on June 3. Once it was set up, weeks later, he told the National Assembly that there was no way the pass would be required beyond November 15. French-speaking readers may enjoy a compilation of his lies here.

In his Brut interview last month, Olivier Véran chose to be more truthful, acknowledging in so many words that changing the sanitary pass into a vaccine pass was “a disguised form of compulsory vaccination,” adding that it would be “more efficient” to stop people from visiting public venues than a mere “mandate,” with €135 fines for unvaccinated people who were caught by chance in the streets.

The authorities have adopted a clear policy of scape-goating the unjabbed. When announcing the vaccine pass at the end of last week, Prime Minister Castex stated: “We are willing to put the burden on the non-vaccinated: they are by far the majority in our critical care units.” This is a controverted statement, as it now appears that a majority of hospitalized patients are “vaccinated.” It also appears that people with “only” two doses are now being counted as unvaccinated.

Véran doubled down on this, saying: “The idea is not to punish, to sanction, to ostracize, the idea is to say ‘now we no longer have a choice, we don’t hesitate, because we can’t continue to fill our hospitals, we can’t continue to live like this under the threat of epidemic waves because 5 million French people still don’t make the choice to protect themselves.’”

Government spokesman Gabriel Attal told the public television news station LCI on December 20: “For the vaccinated to be able to live almost normally, the unvaccinated should live in quasi confinement, that is the logic of these measures.”

This led Fabrice di Vizio, a prominent lawyer and a vigorous opponent of the mandatory vaccine, to comment ironically: “Thank you! The vaccine does not work, quod erat demonstrandum! 6 million people who are negative, because they have been tested, must protect 54 million others from contamination, those who are supposed not to have a serious form of COVID thanks to the vaccine! Amazing! This is what we call science!”

Similar incoherence can be found in public figures who say the sanitary pass “works.” It has allowed the vaccinated to frequent public places thanks to tests imposed on the unvaccinated so as to keep them free from contamination, but who add almost in the same breath that the present situation is one of unprecedented danger because of the omicron variant, for which the “vaccine” offers “good protection.”

A growing number of French citizens who accepted a first, and then a second dose are now beginning to back off from further injections. How many people are changing their minds? Time will tell, but listening to people in shops, speaking with young people who got the first two shots show that such a trend clearly exists.

At present, while so-called “cases” are sky-rocketing in France, with over 232,000 positive tests on December 31, the number of people in hospital “with” or “because of” COVID is rising less fast and the number of people in ICU has now reached slightly more than 3,400 instead of the 4,000 expected in government projections, that is, fewer than 5 out of every 100,000 French citizens, at the height of the respiratory infection season.

Average total daily deaths from all causes in France are presently at roughly the level as in 2019, before the COVID madness began.