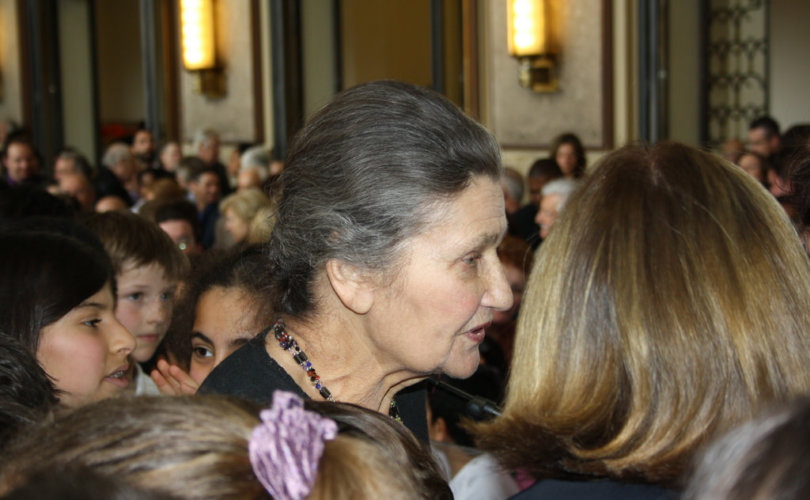 July 3, 2017 (LifeSiteNews) — Tributes have poured in from feminists, mainstream politicians and others for Simone Veil, a French politician whose name will forever be linked with the law that decriminalized abortion in France in 1974, after her death on June 30.

Even conservatives and representatives of the Catholic Church in France have  praised her commitment and the personal qualities she brought to her political career.

It has always been extremely difficult to criticize Simone Veil, born Simone Jacob 90 years ago, the fourth child of a non-practicing Jewish family in Nice. She was only 11 years old when the Second World War broke out. Despite obtaining fake documents, she and her family were arrested in 1944 under the Nazi occupation and deported to the concentration camps of Auschwitz and Bergen-Belsen. She and her two sisters were the only members of the family who returned to France at the end of the war; all the others were killed.

She married a lawyer, Antoine Veil, and had three sons before studying law and entering the magistrate’s profession. Simone Veil’s political career began in earnest in 1974 when she entered “right-wing” Prime minister Jacques Chirac’s government as Health minister under President Valery Giscard d’Estaing.

Supporting the law that would decriminalize abortion was her first major political fight. It is now usually referred to as the “loi Veil,” even though Chirac and Giscard co-signed the text that was adopted in December 1974 after an emotional speech by the 40-year-old novice politician. It was the abortion law that established her popularity. Since then, she was touted as one of the preferred personalities of the French for many years, even though she was never a prominent political candidate. Veil presided over the European Parliament from 1979 to 1982.

The fact that Veil suffered persecution as a Jew, even though she was never a believer, in a way helped her obtain support for an abortion law that was deeply controversial at the time of its discussion. Criticism of her political role was made difficult because it was interpreted and denounced as anti-Semitism. Some are even of the opinion that she was chosen to bring the legislation forward because of her identity and personal history.

The French abortion law, as in many countries, was forced onto Parliament as a “necessity” because of numerous injuries and deaths attributed to illegal abortion — the first step being a famous trial in which feminist lawyers obtained an acquittal for a young girl who had an abortion with the help of her mother after having been raped.

But it was planned well beforehand, most remarkably by a high-ranking Freemason doctor, Pierre Simon, who made clear in a book written several years later under the ironic title Of Life Before All Things, that human life should be considered as a “material” and that the “concept of human life should be revised, at first through contraception, in order to change society from bottom to top.” Contraception was made legal in 1967 with his collaboration. In his book, Simon shows how abortion was necessary to achieve the abortion revolution and how its legalization was planned and conducted. He even dreamed of a time when abortion would happen beyond women’s knowledge and conscience through systematic menstrual aspiration.

How much did Simone Veil know of this plan? That will probably never become public knowledge, but her strategy, sincere or not, was to present abortion as a “failure,” as an “exceptional” act that “no women will choose light-heartedly” but that needed to be “tolerated.” The “loi Veil” imposed a number of restrictions when it was adopted, including two compulsory medical consultations, dissuasive counseling, and an eight-day cooling-off period. The woman asking for an abortion also had to prove that she was in a position of  “distress,” be it economical or otherwise.

All this has now been scrapped, but at the time helped to obtain a positive vote with the help of the left. Not unsurprisingly, though, pro-life counseling was never officially put in place and since 1974 there have been roughly 200,000 to 220,000 official abortions per year. After dipping a little, the numbers went up again even though contraceptive coverage kept expanding, reaching 90 percent among sexually active women by 2011. Over the years, abortion has become easier to obtain and is now completely refunded by public health insurance.

Even though Simone Veil clearly said she would never consider abortion to be a “right,” only a tiny minority of parliamentarians in France are prepared to defend such a position, and she herself never vocally opposed the step-by-step liberalization of “her” law.

Things have come so far that a number of Catholic pro-lifers present her law that made abortion legal as the point to which France should return because of the restrictions it contained – even though in practice they seldom prevented a woman from legally aborting her child and even though the 1974 legislation issued a license to kill innocent unborn babies.

It must be noted that the Catholic Church was opposed to her law at the time but not vigorously so. In her autobiography published in 2007, Veil writes that she met with the bishops of France at the time but got the impression that “they were more interested by their own social security provisions” than by the fight against abortion.

LifeSite readers will not be surprised to learn that France’s top politicians, including ex-“right-wing” president Nicolas Sarkozy and the leader of the National Front, Marine Le Pen, unanimously acclaimed Veil’s memory, even if Le Pen was careful not to mention abortion in her communiqué but rather Veil’s “steadfast convictions.” President Emmanuel Macron tweeted: “May her example inspire our compatriots who will find in her the best of France.” In an official statement, he said France “is in mourning” and full of “gratitude” for her life.

Even more disturbingly, the French bishops’ conference issued an official tweet saluting “her stature as a woman of State, her will to build a fraternal Europe and her conviction that abortion is always something terrible.” There was no official statement recalling Veil’s role in making abortion legal, despite more than eight million unborn victims legally killed in France since 1974.

The official Catholic daily, La Croix, known as the bishops’ journal, went a step further, publishing a long obituary under the title “Simone Veil, a moral authority.” Its author, head of the political department of La Croix (“The Cross”), recalls how carefully Veil prepared the abortion dossier: “Without dogmatism, she took the defense of voluntary interruption of pregnancy [as it is legally referred to in France], ‘the last resort for hopeless situations,’ pounding the words from the rostrum of the National Assembly: ‘Abortion will always remain a terrible thing.’ Months before, she was unknown to the general public; it would give her a national stature, she at once embodied a spirit of openness to modernity, intellectual rectitude and a sense of justice.”

Simone Veil will receive a State funeral on Wednesday in the court of honor of the palace of the Invalides in Paris in presence of Macron. All the constituted bodies of the State will be invited, European flags shall be flown at half-mast, and French flags on official buildings will bear black crepe streamers. Veil will also receive military honors. Would that be for her role in the killing fields of abortion? Saying this is certainly in bad taste. But sadly enough true.