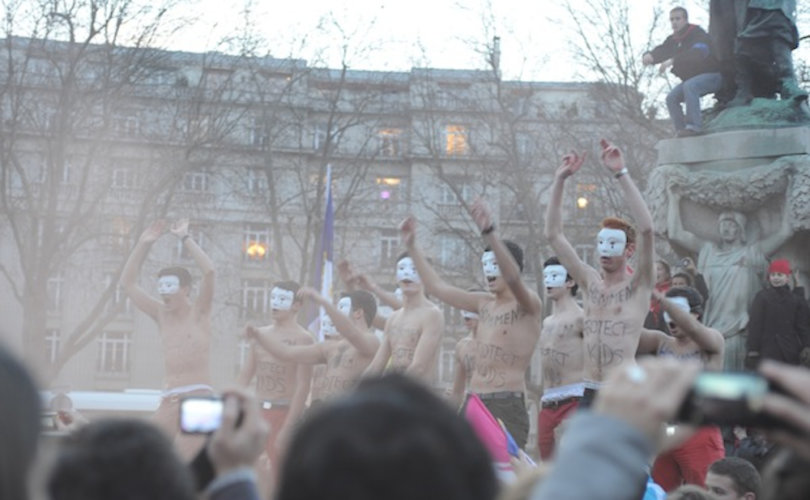 August 30, 2017 (LifeSiteNews) — Never say anything slanderous, insulting or that promotes discrimination against homosexuals or transsexuals in France, even in private. And remember that discrimination and hate speech have a much broader meaning than you might think: Under modern anti-defamation laws, their scope extends to merely a negative statement or even just saying certain lifestyles are morally reprehensible.

In a government issued decree at the beginning of August, when the vast majority of French people are having their vacation or otherwise trying to cope with midsummer lethargy, a new target for “hate speech” has been identified. Heavy penalties and other repressive measures have been set up for committing verbal “abuse” or differentiated treatment related to “gender identity” – even in private.

Since 1972 when the first anti-discrimination law came into force in France, race, religion, nationality, ethnicity, and, more recently, handicaps and “sexual orientation” were part of the protected categories that fell both under the public and private hate speech laws. Public offenses are those committed in the press or in the audiovisual media and those that are most often prosecuted and sanctioned. The new decree scraps the word race and replaces it with “presumed race” in order to make clear that in the spirit of the French government the concept of race is a guilty fabrication. And for the first time “gender identity” has been added in order to fight “transphobia.”

In the most radical snowflake rule to date, the executive order aims to reinforce law enforcement in regard to “racist” and “discriminatory” defamation and insults as well as inciting to racism and discrimination. It doubles existing fines and adds provisions for re-education of offending citizens. The text’s range has deliberately been widened in order to include homophobia and transphobia occurring in the “non-public” sphere – in the workplace, at school and even in private conversations insofar as the decree says nothing to the contrary.

Thus, private comments on social media would fall under the decree, as would a conversation between an employer and an employee or a job candidate, or even a private talk or written exchange between third parties. The victim can be a person involved directly in the conversation or a person or group targeted in the absence by a conversation, within a limited circle of people who share a common interest, be it professional, personal, or otherwise.

The new offense has moved up in the penal scale and possible fines have been doubled from 750 euro to 1,500 euro (3,000 euro, or $3,600 – for repeat offenders). It is still in the category that can be defined without a legislative vote, giving President Macron's government full power to install this new breach of liberty. As is the case with driving offenses, a plain police court has the competence to judge in these matters. When a company director is involved, the fine applies to the company as a “moral person” and can represent up to 7,500 euro, or double that sum for a repeat offense.

Any person deemed guilty of the offense can also be punished in one or more of the following ways:

1. Being forbidden to own or carry a weapon requiring a permit for three years at most;

2. Confiscation of one or more weapons owned by the guilty party or to which he has free access;

5. Being obliged to follow, where appropriate at his or her own cost, a civic education course.

This last obligation has already been enforced in France in the case of public hate speech and involves courses in political correctness. It is of course reminiscent of ideological re-education as popularized under communist regimes where deviant opinions were considered to be a sign of mental illness that needed to be “healed.”

As to the confiscation of “things,” one can only conjecture as to what the decree means. Would it entail, for instance, the seizing of a computer used to post a guilty comment?

A pro-gay group applauded the new measures on its website, stophomophobie.com. It regretted, however, that a statute of limitations fixes the time during which judicial proceedings can be opened against the accused “racist” or “homophobe” to three months after the presumed offense.

French lawyers have also commented on the new decree, pointing out that until recently defamation, insults, and discrimination in restricted private contexts were at relatively low risk of condemnation and punishment. They expect the new decree, whose wording allows for a relatively extensive interpretation, to allow for more efficient prosecution, especially when written texts such as emails are involved.

France’s lengthy experience with anti-hate speech laws has made it abundantly clear that the objective is not so much to avoid and punish calls to violence, untrue expressions, and discrimination based on unjust prejudice but to install positive discrimination to the benefit of the protected groups.

In the case of nationality, for instance, current laws prevent people from making it known they wish to employ a French national or a Catholic nanny rather than a migrant or a Muslim nanny. In practice, many large companies proclaim their “virtue” on that account by openly favoring foreign job seekers. The same logic can be expected to apply for homosexuals and transsexuals who are obtaining a sort of right to complain – and to sue – whenever they consider themselves not to have been treated according to their ever-inflating rights.