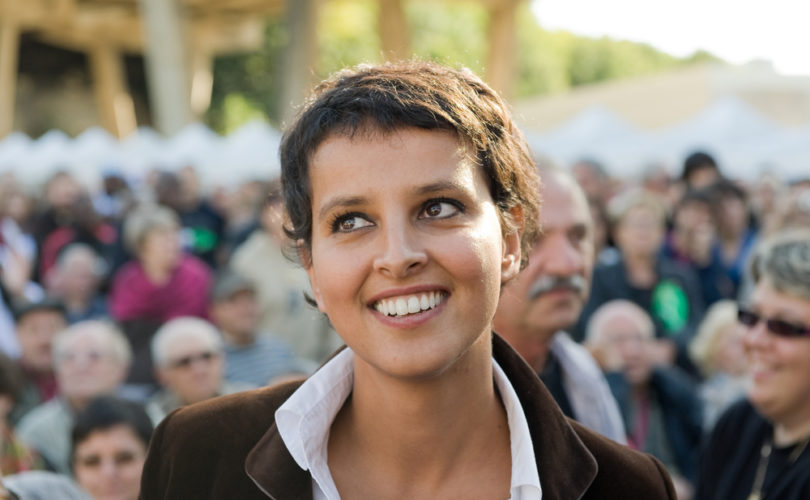 Although the “distress” requirement has not been in force for years, women’s rights minister, Najat Vallaud-Belkacem (pictured), pushed for its removal from the code, arguing that it is “obsolete.”Shutterstock

Abortion on demand is now a legal reality in France, after a new law went into effect on August 5th, scrapping the remaining nominal requirement that a woman seeking an abortion in the first 12 weeks be in a “state of distress.”

The original abortion law dating from 1975 included several provisions for the protection of the unborn child: women seeking abortions were to receive counseling and be informed of all public help available for them to keep their child, and abortion was – in theory, at least – reserved for those whom pregnancy placed in a “state of distress.”

In practice, however, pro-life counseling and assistance was never enacted by public services, and five years after abortion became legal in France the Council of State decided that proof of a “state of distress” was not necessary to obtain an abortion, leaving women to judge whether they were entitled to “termination” on those grounds.

The abortion law itself was amended several times since then to facilitate easier access to the procedure. Abortion only appears in the penal code insofar as a woman is an involuntary victim of it, and what began as a decriminalization has now merely become a legally supervised procedure.

Although the “distress” requirement has not been in force for years, women’s rights minister, Najat Vallaud-Belkacem, pushed for its removal from the code, arguing that it is “obsolete.” In effect the move was a symbolic gesture, sending a message about the French socialist government’s priorities.

Including the measure in the “law for real equality for women and men” was also highly symbolical. The law states that “real equality” can only be achieved when women can “fully control their own sexuality, in particular through access to contraception and voluntary ‘interruption’ of pregnancy.”

The “equality” law also seeks to banish “gender stereotypes” – or, as the first article of the law puts it, “sexist stereotypes” – through a series of measures concerning equal pay, compulsory presence of women on the directors boards of large companies, and heavier fines for political parties who do not respect male-female parity.

Vallaud-Belkacem said the law also aims to “change mentalities” and put an end to “unfair distribution of domestic and parental tasks.” Parental leave as it used to exist will be shortened from now on if the “other parent” (to account for same-sex couples with children) does not take part in it.

The wording of the law is surprisingly explicit, given widespread opposition to same-sex “marriage” and the teaching of gender ideology in schools: it requires measures to be taken “in order to bring to the attention of the public French and international research on the social construction of gendered roles.”

This may seem to be far removed from the issues of abortion and “distress,” but in fact every disposition of the law is governed by the same logic: eradicating as completely as possible differences between men and women.

A classic notion of French civil law has disappeared at the same time. It required the head of a household to act prudently in the best interest of his family: “en bon père de famille,” as a good father would. All the occurrences of this expression in the civil code and other texts have been traced and replaced by the words “reasonable” or “reasonably.”

While several parliamentary battles were fought over the notion of “distress” and other aspects of the law, when it came to adopting the text as a whole, on July 23rd, not a single member of the National Assembly or of the Senate voted against. Several members of the opposition voted for the text while the rest of its opponents simply abstained. Many explained that they agreed with it as a whole.

A group of opposition members brought the issue of “distress” before the Constitutional Council, which has the power to reject a parliamentary text that does not conform to the French constitution. Their appeal was rejected.