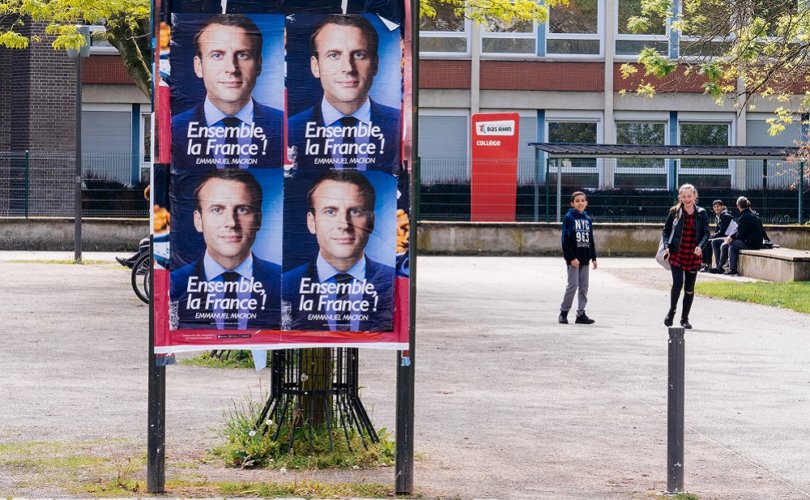 Children near posters of French president Emmanuel Macron that read, 'Together, France!'Hadrian / Shutterstock.com

June 19, 2019 (LifeSiteNews) — Some 2,000 16-year-olds voluntarily joined on Sunday the very first edition of a brand-new French “civil service” initiative reminiscent of compulsory military service. The Service national universel (Universal National Service) was set up by the French government at the request of President Emmanuel Macron, who had promised during his presidential campaign to restore some form of military service.

The SNU is a civic service, not a military one, but by 2026, it will become compulsory for all young people aged 16 (ideally, all those in the French equivalent of grade 10). Each year, the 800,000 French members of that age group, boys and girls alike, will be obliged to join.

Proof of participation will be required to be able to learn to drive, pass the end of high school exam (the “baccalauréat,” which is necessary to enroll in higher education) and obtain other state diplomas, pass civil service exams, and the like.

Young people who refuse will be allowed to catch up with their SNU between ages 18 and 25, for two months instead of one, in order to avoid sanctions.

The problem with a National Service for underage kids is that it clearly negates parental rights. SNU will be compulsory for minors, whose parents or legal guardians will have no say as to whether their own children may participate or not, nor will the parents be allowed to refuse a given venue or any type of activity or civic work.

For the time being, that problem does not exist, because all those who joined the trial run of the SNU enrolled voluntarily. But next year, 40,000 16-year-olds will join the program that will build up from then, gradually eliminating the rights of parents of whole cohorts of French citizens.

The first SNU session saw youngsters from a dozen selected “departments” take trains and planes, some going as far as French Guiana, in order to spend two weeks together in various locations for “cohesion training.” This training statutorily takes place in a region of France other than the student’s home location.

Once the system becomes compulsory for all, if an underage girl is sent to a venue where she will be placed under the surveillance of adults her parents know nothing about, together with, say, delinquent hoods from an ethnic suburb, nothing can be done about it. If she objects, her academic future will be at stake.

The second part of the service takes place closer to home, during another two weeks dedicated to a “mission of general interest.” For this year’s volunteers, they will take place between the beginning of July and the end of June 2020, this time focused on a personal commitment with government-approved organizations ranging from firefighters, the military, and the police to environment preservation groups. Mentoring younger students is also an option. Only time will tell what range of activities will be available.

Some would applaud the fact that the French government is seeking to put a bit of structure in the lives of so many high school students (or dropouts). While not a military service per se — that was scrapped in 1996 and involved only boys aged 18 and over — the SNU seeks to instill national values and discipline in a generation that often lacks both.

The groups who started the first two-week “cohesion training” sessions were issued uniforms — a white polo shirt with the SNU logo, blue trousers, and a blue cap with a “blue, red, and white” cockade for girls and boys alike — and were expected to get up at 6:30 to raise the colors and sing the national anthem (the bloodthirsty and revolutionary “Marseillaise”).

Learning to stand up straight, hands out of pockets and arms uncrossed, they got a taste of military-like discipline that, in some cases, included obstacle courses without arms, self-defense training, and other paramilitary activities.

It could all resemble a sort of mandatory national scouting, but with more than a few worrying twists. The young people are accommodated in existing boarding schools, holiday camps, and public student lodgings, five to a room, with no parental control over who stays with whom. All activities are coeducational. One can only assume that boys and girls are separated during the night.

And there is of course no religious dimension, which is most often present in Scout and Girl-Guide camps. On the contrary, the objective is to revive the “Republican melting pot,” which rests on the revolutionary slogan “liberty-equality-fraternity” and precludes all religious convictions. All distinctive religious items, from Muslim veils to Catholic pendants and medals, are expected to be banned.

Even more importantly, besides the many physical activities included in the trial runs’ programs — and also “artistic” activities like coloring posters to support the French national football team — indoctrination is high on the list. It will take the form of talks on secularity (not to say secularism), man-woman equality, sexist violence, and other forms of discrimination.

Even left-wing commentators are mocking the pomposity of the project that aims to transmit the “core values” of the French Republic to youngsters who, for the most part, have already spent some 13 years in the public education system that repeatedly purports to do just that by the “magical” device of putting them all together for two weeks.

Social intermingling is also one of the objectives. In particular, the SNU is intended to force high-income and low-income populations to discover each other, and also, originally, French high school students and their peers from the ethnic suburbs.

The two-week stays will include “discussion groups” that are widely used for social engineering and group dynamics. Participants are also expected to submit to medical exams and the evaluation of their literacy, leading to the prescription of “rehabilitation” therapy. All of these practices will be totally outside the control of parents or legal guardians.

At an estimated 2,000 euros per student, the SNU will cost the French taxpayer at least 1.6 billion euros when it reaches full capacity. That’s a conservative estimate.

In a statement published on June 15, “Juristes pour l’enfance” (Jurists for children) said: “No to the regimentation of children, the State should respect parental rights.”

“Juristes pour l'Enfance firmly reiterates its opposition to this gigantic enlistment of our youth, and invites the French to be clear-headed,” it said.

The statement continued: “As we have already said: unlike young adults aged 18 and over who were previously called up for military service, the target of the new SNU are young boys and girls aged 15 or 16, that is, minors who are still placed under the responsibility and authority of their parents (article 371-1 of the Civil Code).”

Noting that the SNU is in no way a military service, “Juristes pour l’enfance” added:

The young people ‘called up’ for cohesion internships will not prepare to become the nation’s ‘little soldiers,’ but on the other hand, everything will be done to make them ‘little soldiers’ of Macronian progressivism.

“‘Political correctness’ will be the norm. Just one example: ‘A time for debate is scheduled for the evening after dinner. On June 17, around the France-Nigeria match of the Women's World Cup, there will be a discussion on gender equality.’ Will the young people just be talking about football that night? Not a chance. Moreover, in several departments, the presence of prefects is announced for these strongly oriented debates!” the statement noted.

It also deplored the fact that “the objective is to recruit an entire age group, i.e. 800,000 young people” and “to make the system mandatory, with sanctions for ‘deserters.’”

“To accommodate and supervise 800,000 young people, 2 to 3 billion euros will be needed each year. The State does not yet know where it will find them. Above all, in order to further infringe on the individual freedoms of young people and to remove them from the authority of their parents, the State must be authorized by law, and probably even by the Constitution. However, no text was voted on,” it underscored.

“France is not the kingdom of Ubu. Juristes pour l’Enfance therefore solemnly renews its appeal to parents to refuse the enrollment of young people by the State, in defiance of their responsibility as the first educators of their children,” the statement concluded.