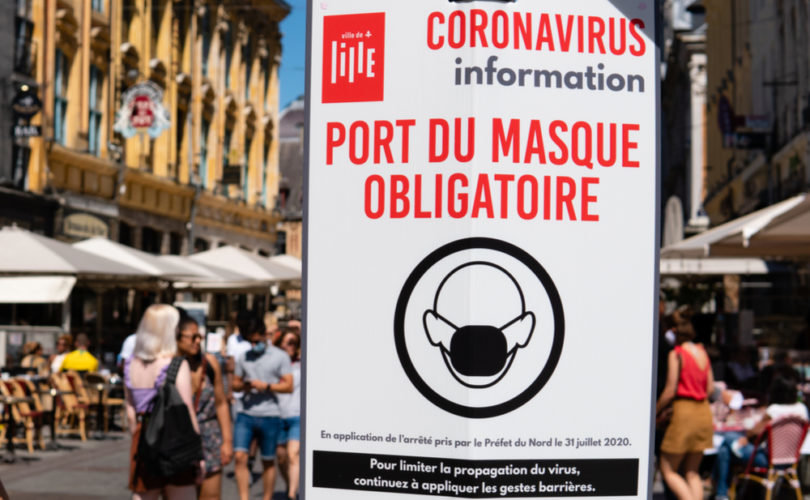 PARIS, France, April 30, 2021 (LifeSiteNews) — French President Emmanuel Macron announced this Thursday that from May 2 until June 30, France will slowly be returning back to “normal,” following its third lockdown during the month of April. “Together, these following weeks, we are going to build the way that will take us back to normal life,” he announced on Twitter. However, by June 9, a sanitary pass will be required in order to join certain large events, making France the first European country to have institutionalized something that is very much like a vaccine passport. The “new normal” will still be considering every citizen as a potentially contaminating agent.

Macron announced the new measures in an interview with the regional press on Thursday evening, at a point in time when deaths attributed to the coronavirus have remained more or less stable at about 300 per day, in a population of 67 million, while at the same time there is no excess mortality compared to previous years.

Cases of positive tests have also remained stable since mid-March until April 20 and have been declining since then, which would suggest that the lockdown, curfew and closure of schools since late March did not play a significant role.

While the situation seems not to have changed much, Macron announced that as of May 3, inter-regional travel will again be allowed in France and self-authorizations will no longer be required when moving beyond 10 kilometers from one’s home. Schools will also open partially. Two weeks later, on May 19, the national curfew will be set at 9 p.m. instead of 7 p.m., and so-called non-essential shops will be allowed to reopen at last in a framework of stringent sanitary rules. Restaurants and bars are to remain closed until June 9, only terraces being allowed to receive the public with a maximum of 6 persons per table between May 19 and June 9.

On June 9, exhibitions and commercial fairs may open with up to 5,000 visitors, and these events will be the first to require a valid sanitary pass: a QR code proving that a person has been vaccinated, has a recent negative COVID-19 test, or has antibodies proving that he or she has already had the illness. The same will apply for tourists entering France. The curfew will move up to 11 p.m.

On June 30, the curfew will finally be lifted, all events wutg more than 1,000 people either outdoors or indoors will require the sanitary pass, which will in fact be stepped up as the sanitary situation supposedly improves. “Barrier gestures” — this theoretically includes masking — and social distancing will also be maintained beyond June 30.

By that date, the French government hopes that tourists from the European Union will have obtained their own “green sanitary pass” that would allow free movement throughout the EU.

This very precise schedule must not be taken for granted. Should the incidence rate of infection rise suddenly, or if intensive care units are too full, or if the incidence rate reaches 400 positive tests per population of 100,000 within seven days, “emergency brakes” will be applied with new closures and new restrictions, keeping all the citizens on their toes waiting for the government to give a bit of slack.

To summarize: A few restrictions are being lifted, probably too late for many a small neighborhood shop, and for many of the small bars and restaurants not belonging to national or international networks that form the social fabric of towns and villages. But the intrusions into people’s private lives are not on its way to be dismantled: Instead, tracking and monitoring of citizens according to the sanitary situation will become more and more frequent.

For the time being at least, vaccination as such is not an obligation, even though in practice pressure is being put on many old people and people working in the health services or the military to get the shot. Also, for the time being, the sanitary pass in its smartphone or printed version will only be required for large gatherings, not for entering “everyday places” such as restaurants, theaters, and the like, nor for “visiting friends,” as Macron put it.

The question remains: Have there been discussions in government circles regarding a sanitary pass for all social contact beyond the immediate family?

Many in France have underscored that Macron, who will be up for re-election in in the spring of 2022, can hardly take the risk of not opening up the country in view of the summer months: The French would not forgive him if they were deprived of their vacations. The approach of using sanitary passports can also be at least partly attributed to electoral concerns, but of course there’s no guarantee that stricter rules won’t apply when voting is over.

This has been prepared for a long time. At the European level, an EU vaccine passport was already on the table months before the COVID-19 crisis. In France, a government-run smartphone app which allows to trace “contact cases” was set up last year, with very little success. It was later replaced by “TousAntiCovid,” which was slightly more successful, also offering an online self-authorization form to move around during lockdown, with all one’s data neatly collected in a place accessible to the authorities. Since Tuesday, the app can provide the QR code proving vaccination or negative tests.

Having pioneered this surveillance material, France played a large role at the EU level to promote the sanitary pass. Earlier this week, European commissioner Thierry Breton, who hails from France, met with French government officials to streamline operations.

And on this Thursday, the European Parliament approved a “European COVID-19 certificate” allowing freedom of movement within the EU. The pass was approved with 540 to 119 votes (and 31 abstentions). Once again, and thankfully, it will not be a full-fledged vaccination certificate but a document proving either vaccination or negativity. Such a pass would theoretically prohibit member states from imposing quarantines on travelers with a valid certificate, but a number of member states want to safeguard their capacity to impose such measures which belong to their sovereign competence.

The European Commission has said it is doing all it can to implement the new certificate, and has made clear that talks are underway with the United States in order to adopt similar reciprocal procedures.