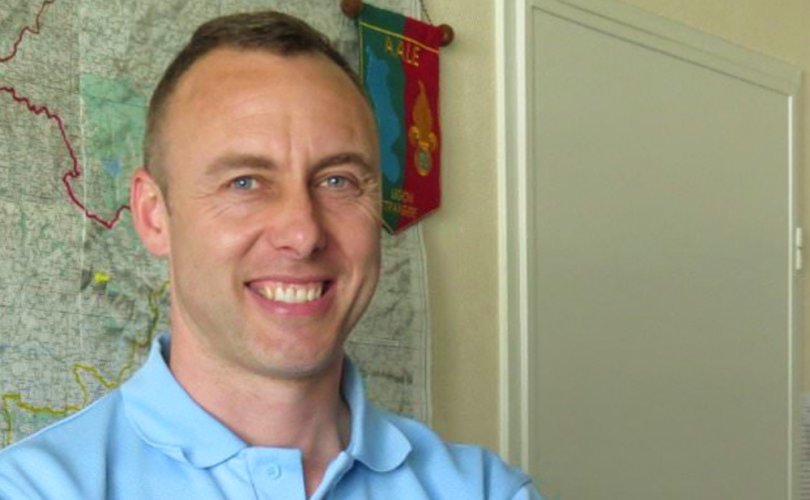 March 28, 2018 (LifeSiteNews) – France is under the shock of its most recent Islamic terrorist attack in a small supermarket near the beautifully preserved medieval town of Carcassonne in the Southwest, where Muslim immigrants of North African descent form an ever-increasing part of the population.

But this attack has been very different from the previous shootings and bombings.

This time, the focus was on one of the victims who sacrificed his own life in order to allow the many customers and workers trapped in the little “Super U” of Trèbes to escape to freedom while he offered to take the place of a woman hostage held by the attacker.

She was able to go free; he would be viciously attacked, having his throat slit by the radical Muslim terrorist Radouane Ladkim who also shot him three times.

Arnaud Beltrame’s subsequent death shocked and moved a nation: celebrated as a hero, he has become a symbol of courage but also of faith.

Arnaud Beltrame, 44, was a lieutenant-colonel in the French gendarmerie, a military corps responsible for security in the smaller towns and rural areas. His career had been one of exceptional bravery and excellence: he had participated in special operations in Iraq, organized security for French nuclear sites and he was also one of the first French military to have joined the elite “GIGN” counter-terrorism and special protection unit.

He had recently taken a post as commanding officer of the gendarmerie in the Carcassonne area in order to join the woman he was to have married next June. Even more importantly, after having been brought up in a family that no longer practiced the Catholic faith, he had undergone a personal and profound conversion about 10 years ago, receiving Holy Communion for the first time and also the sacrament of confirmation.

He lived his Christian faith

His sacrifice was immediately compared to that of Saint Maximilian Kolbe who offered to take the place of a young father in the Nazi extermination camp of Auschwitz during the Second World War in a roundup of prisoners condemned to die of thirst. The saint died in his stead.

Beltrame was savagely assaulted by Ladkim at 2 p.m. on Passion Friday. Father Jean-Baptiste of the nearby abbey of Lagrasse, which shelters the Catholic community of the Canons Regular of the Mother of God, was able to visit the soldier in hospital that same evening, where he lay, heavily wounded and unconscious but capable of receiving the last rites: the sacrament of Extreme Unction which sometimes brings healing to the ill, and always comfort and pardon to the dying.

Father Jean-Baptiste knew the man well: it was he who was preparing him and his fiancée Marielle, with whom he was already engaged in a civil marriage, for his religious wedding. Marielle was present; she answered the prayers for the dying led by the young priest in the traditional Latin form in which the Canons of Lagrasse celebrate the liturgy.

At the Father’s request, a nurse fixed a Miraculous Medal to Beltrame’s shoulder with tape: in secularized France where most young people have lost the sense of the faith of their fathers the ministering of the Catholic priest was welcomed with respect and helpfulness.

Beltrame died in the early hours of Saturday morning and the news spread like a wildfire. His heroic act had been that of a deeply faithful man, a man who gave his life to save the life of others.

To Father Jean-Baptiste, it was obvious that Beltrame had been driven not only by his sense of duty as a soldier, but also by the charity that is proper to the Christian faith.

Ladkim, on the other hand, appeared as the worshipper of a lesser god, killing where Beltrame served life out of love. Beltrame’s fatal injury was characteristic of Islamic ritual killings: animals must be sacrificed by having their throat slashed and are then bled to death. Beltrame was slain like a dog – the impure animal and hated enemy of Islam – or like a lamb, that offers itself to the slaughterer’s knife.

Islam is the rising religion in secularist France: the killing of a devout French Catholic believer in such a manner is acting as a wake-up call as to the realities and values of the two religions.

But there is even more to this than meets the eye.

He saved a mother

Beltrame took the place of a female hostage, and certainly saved her life. Julie, 40, is married and has a young daughter, 2-and-a-half years old. She had recently lost her job as an engineer and had accepted a modest post as a cashier at her local supermarket.

So, he saved a woman and a mother. This is the order Christian civilization: “women and children first”, where men are expected to protect and defend the most fragile, and especially those who carry the future by bearing children and nurturing them.

In Islam, women are second-rate citizens, the objects of men’s desire who must be hidden from public view. It is Christianity that invented courtly love and gallantry. And gallantry means an attitude of courteous respect, but also bravery and valor.

This goes very much against the grain of gender ideology.

But so does the whole story. The mother of Arnaud Beltrame, Nicolle Nicolic-Beltrame, made a point of speaking to the press about her deceased son. From the moment she heard on the radio that a lieutenant-colonel of the gendarmes had substituted himself for a hostage, she knew it was he.

From a boy, he had wanted action, to be the best, to learn what could be learned to help the oppressed, she said.

His father, grandfather, and great-grandfather had all served in the army. And when he was small, Arnaud loved nothing better than to play with toy soldiers. No one thought of stopping him to avoid “gender stereotypes”. It was considered totally normal for him to join a military high school, and then military college and elite officer training where he graduated with the highest marks of his year. Virile courage is nurtured in the family, as his mother’s poise and dignity amply demonstrated.

Her son, she said, loved his parents and his brothers, but he always put “the fatherland first, his family afterwards”, freely accepting the risks of his perilous missions. “Knowing how much he hated mediocrity, you want his gesture to help others”, she said. “When people are attacked in the subway or on the train, if only people would get together to react and stopped being passive, things would probably be better.”

Beltrame will receive a solemn homage from the nation in Paris on Wednesday in the courtyard of the Invalides. His mother approves: “I want it mostly because of the symbol it will bring: in France, we have decided not to take things lying down, we are not running away, we are trying to face the risks of the day, in France and elsewhere.”

Arnaud Beltrame had taken his conversion most seriously, going on a pilgrimage to the sanctuary of Saint Anne of Auray – the mother of the Virgin Mary – in Brittany in 2015 in order to find a good wife. That led to his meeting with Marielle, a young and radiant veterinary surgeon with a “profound and discreet Catholic faith”, said Father Jean-Baptiste in a statement. She also has a history of generosity, having done volunteer work with handicapped young people and manning a hotline for people with addictions. She spent three years as a volunteer with the Franciscans of the Bronx. Nothing could be further from the image of women in Islam.

Their engagement took place in the Breton abbey of Timadeuc in 2016; they were civilly married that same year so that Arnaud could obtain a posting in the South of France. They had spent many hours with Father Jean-Baptiste whom they had met by chance while visiting the beautiful medieval abbey of Lagrasse, preparing their religious marriage, which they took most seriously.

Speaking to the French weekly “La Vie”, Marielle said: “The funeral of my husband will take place during Holy Week, after his death on a Friday just before Palm Sunday, and this was not insignificant to my eyes. It is with a great deal of hope that I am waiting to celebrate the Easter Resurrection with him.”

“Arnaud will never have children according to the order of the flesh. But his striking heroism will encourage many imitators, I am sure, who will be ready to give the gift of self for France and for its Christian joy”, concluded Father Jean-Baptiste in his statement.

These words have been seen and shared thousands of times. They cannot but touch the heart of a whole people.