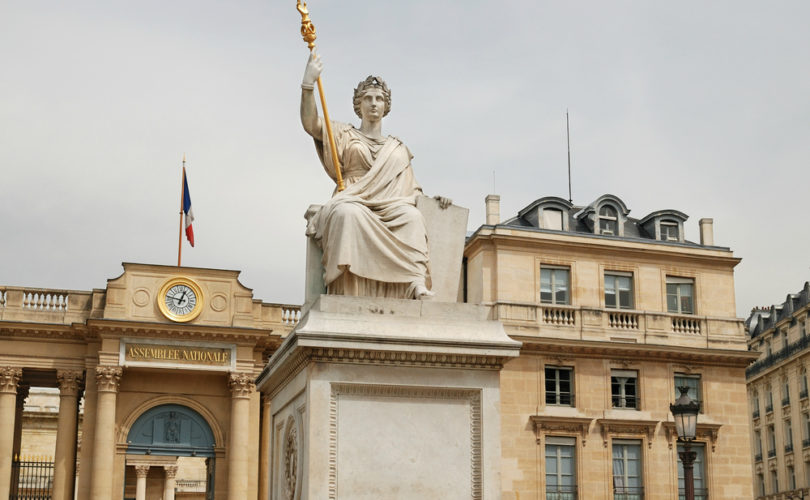 Sculpture in square near to the French National Assembly, Bourbon place in Paris, France.Shutterstock.com

A resolution proclaiming abortion to be a “fundamental right” was adopted by a large majority last Wednesday by the French National Assembly. The resolution was presented by a socialist member, Catherine Coutelle, and was discussed on the 40th anniversary of the landmark speech, on November 26, 1974, by then-minister of health Simone Veil, whose name is still associated with the French abortion law, or “loi Veil.”

Only 151 members of the National Assembly were present out of the total 577 deputies, on a day and time of the week that usually attract many to the Palais-Bourbon, where the National Assembly sits: Wednesday is government question time and sessions are broadcast nationwide. Whether the absentees found the debate unimportant or were simply embarrassed about voting for or against, the fact is that the motion was approved by 143 of the voters. Seven voted against (Jacques Bompard, Jean-Frédéric Poisson, Jean-Christophe Fromantin, Nicolas Dhuicq, Xavier Breton, Yannick Moreau and Olivier Marleix) and one abstained.

Of those who voted “no”, one – Fromantin – was threatened with exclusion from his centrist party. One UDI senator, Chantal Jouanno, said his place was no longer within the UDI of which Simone Veil is an honorary member. Other party members, however, underscored the fact that the “loi Veil” created an “exception,” not a right, and that Veil herself defended the text in 1974 saying “abortion is always a failure, sometimes a drama”: “Society tolerates” abortion “but should not pay for it or encourage it,” she said.

To be precise, the decriminalization of abortion forty years ago came with all the usual hype: abortions would at least be “legal, safe and rare.” As in the US, statistics of illegal abortions and related maternal deaths were inflated: with the new law, there would be less abortions because women “in distress” would find help to keep their child. Compulsory pre-abortion counseling would take place at the expense of the State.

While abortion was certainly not a “right” when the Veil law came into force, this has been amended over the years to the point where abortion is now performed on request during the 12 first weeks of gestation; all legal conditions disappeared one by one. Social security refunds soon became the norm: since Easter last year, abortion is fully funded by the government. Groups may advertise for abortion since 2001 – the French Family Planning Association runs major campaigns in the Parisian metro each year – and heavy fines and even prison sentences now await those who “hinder” abortion, be it physically in hospitals, or through “psychological or moral pressure,” or by preventing a woman to obtain “full information” about how to get an abortion.

All this amounts to having turned abortion into a right, even though no legislation expressly proclaimed it – up to now.

A parliamentary resolution has no binding force but it does send a strong signal to lawmakers and judges. And in order to come before the Chamber it must obtain leave from its president and from the prime minister, meaning a form of political consent.

Quoting the “loi Veil” and all its amending laws, as well as the Peking and Cairo conferences and a 2008 resolution by the Council of Europe promoting “access to safe and legal abortion” across Europe, the parliamentary resolution “reaffirms the importance of the fundamental right to abortion for all women, in France, in Europe and the world.” This goes far beyond the scope of the French Parliament but it is a way of adding support to “abortion rights” as promoted by the abortion lobby at the United Nations and its Population, Human Rights, and Women’s Rights agencies. France prides itself on having given the world its “Declaration of Human Rights,” hence the eagerness of the abortion lobby to obtain such a resolution in Paris.

The text calls abortion a “fundamental right” insofar as “the universal right of women to dispose freely of their bodies is an essential condition for the construction of true equality between women and men in a progressive society.” It also calls for “sex education” for young people, and aims to “guarantee women’s access to quality information, adequate contraception and safe and legal abortion.” It “desires France to keep up its commitment, on both European and international levels, in favor of universal access to family planning.”

Interestingly, the abortion lobby has been more intent on obtaining this resolution than on inscribing the words “right to abortion” in the law that regulates it. A “fundamental right” is not just a possibility or a prerogative affirmed in positive law: it is a principle akin to those proclaimed by constitutions, fundamental laws of the State, charters and international conventions. As such, it suffers no exceptions or opposition and disqualifies all who question its legitimacy.

If the so-called right to abortion were to become a “fundamental right” at the international level, or even a “human right,” not only would this threaten the right to conscientious objection, it would open the way to coercing States to legalize abortion or to scrap any conditions that would appear to be limiting a woman’s access to abortion.