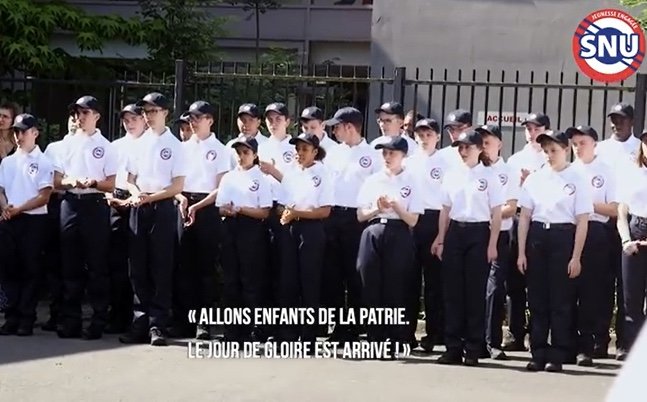 June 26, 2019 (LifeSiteNews) — The extreme secularism of France’s new youth civil service program is becoming more obvious since the beginning of its first trial run this month with approximately 2,000 16-year-old voluntary participants and it was immediately made clear that religious symbols, from Islamic veils to discrete crosses or stars of David, were not welcome.

Even worse, no time was put aside for religious practice, in particular Holy Mass on Sunday mornings and other feasts of obligation for Catholics who still, nominally at least, make up the most important religious group in France.

The Universal National Service, or SNU, is set to compulsory for all 16-year-old French high-schoolers by 2026. The program involves a two-week stay with young people of mixed social origins, followed during the year by two weeks of “voluntary” work for a “mission of general interest.”

LifeSite has already underscored that the French SNU will directly contradict parental rights over minors, forcing underage kids to participate in whatever activity and collective voyage the authorities will choose to impose on them.

Secretary of State Gabriel Attal is responsible for the organization of the SNU, which is still largely in its experimental phase. She explained that all participants will be “initiated in the fundamentals of the Republic,” as Catholic weekly La Vie put it. They will be expected to discover a “spirit of solidarity,” explained Attal, which apparently practicing their own religion would not allow.

In principle, France protects every citizen's right to practice his or her own religion. But the SNU has a higher aim: erasing differences of all kinds by forcing boys and girls, students from state schools and confessional schools, young people from the rich city centers and others from the ethnic suburbs, to mingle, wearing uniform and joining an uninterrupted series of activities – and politically correct lectures – for two weeks.

There is some dissension among the powers that be about how to translate all of this into a clear policy regarding the practice of religion. The French education department is adamant that all religious symbols, prayers, and worship should be kept private. The only place where students could wear their religious identifiers would be in their collective bedrooms.

For the Observatory on secularity (Observatoire de la laïcité), such a strict interpretation would be unacceptable. Students age 16 will not be joining some sort of military service but will be “called” in the context of their schools, about a fifth of which are confessional schools in France, ranging from Catholic and Christian to Jewish and Islamic.

A Observatory spokesman said students are not obligated to respect the rules of strict neutrality.

But for the French Ministry of Education, secularism is not negotiable.

“There is quite simply no debate,” said a source close to Gabriel Attal. SNU will be “a stage in the formation of new citizens” and they will be stationed in centers meant for the collective welcome of minors: religious neutrality will therefore be the rule, the source confirmed.

For the same reason, going to Mass will not be possible. “In order to preserve cohesion and to respect the participants’ commitment, no one will be allowed out of those centers during the full two weeks,” the same ministerial source made clear.

At most, there will be a common area, called an “interconvictional space,” where every participant will be allowed to have a time of personal recollection, religious or not.

“Normally, there will be such a space in each center, but it will depend on the needs in each case,” he added.

This means a Catholic would be expected to go and pray in one corner while in another spot a Muslim would be performing his ritual prayers and an atheist would just sit and think.

But this is in no way a form of collective worship the French Republic is not supposed to impede.

According to La Vie, the French Ministry of Education is not prepared to change its mind. Attal’s entourage says the objective is to “avoid a break between the exercise of personal convictions and community life.”

“The young people will have the possibility of isolating themselves or of exerting their spirituality in their room, through music or reading,” one source explained.

The objective is plainly to format the young people, making clear to them that the Republic’s compulsory collective agenda is more important than any kind of religious obligations.

As the SNU is not in military service, no chaplains will be engaged, contrary to what happens in the French army where many religions are catered to and where a multitude of chaplains, many of them Catholic, are part and parcel of military life.

Marc Guidoni, an expert for the official national Values Plan of the Republic and of Secularism, finds that all of this goes much too far. He underscored that the collective prayer and reflection area has nothing to do with “collective practice of religious rights.”

He also recalled that abstaining from public manifestations of belief is an obligation that only concerns public functionaries. Going further would be “a grave obstruction of liberty,” he said.

On the question of Sunday morning Mass, Guidoni remarked, “It is comprehensible that military personnel miss out on Mass because they are obliged to be on guard or are performing protective missions. However, if those who are called to service are prevented from going to Mass because they have to go and run and play in the woods, that’s something else.”

The plan appears to be to fill up feasts of obligation with compulsory collective schedules where absences would be sanctioned.

It is hard to believe that these measures are not deliberate attempts to attack the faith of Catholic youngsters, possibly on the pretext of also forcing other young believers from Islamic backgrounds, for instance, to go without their food restrictions and other religious obligations.

That is how French secularism often works, forcing all to accept the same constraints and reject religious expression in the public square.