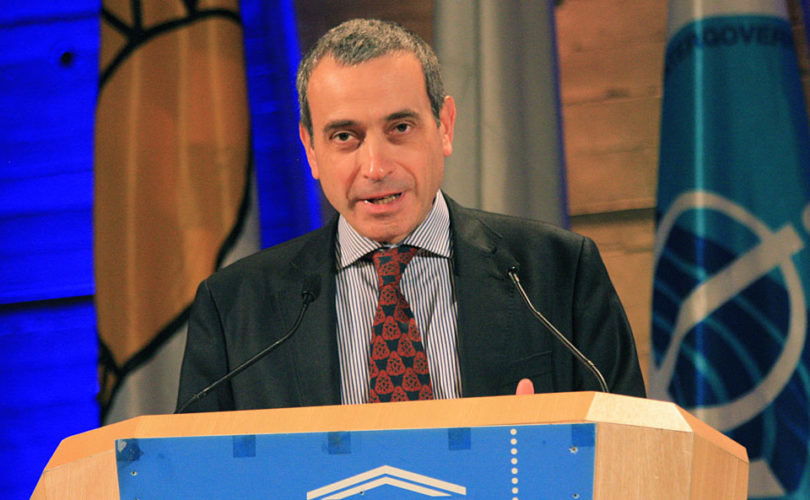 As world media accuse Pope Francis of 'homophobia,' huge holes are emerging in their narrative about Laurent Stefanini's nomination.

PARIS, April 15, 2015 (LifeSiteNews.com) — World media are falling over each other accusing Pope Francis and the Catholic Church of “discrimination” for having – apparently – rejected France’s proposed new ambassador to the Holy See, Laurent Stefanini, who has been widely portrayed as a self-proclaimed homosexual.

He was named on January 5 but the Holy See has yet to accept him. Usually, when acceptance of a new ambassador is not forthcoming within a few months, the Vatican’s silence is interpreted as a rebuttal. What with the Pope being labeled “homophobic” and reports and counter-reports coming in, the affair is turning into a diplomatic crisis – to the advantage of the LGBT lobby, which is accusing the Church of being “bigoted” and prepared to refuse a fully competent professional on the grounds of his “sexual orientation” even though he is in no way a gay activist.

At the same time, the choice of Laurent Stefanini to represent socialist France at the Holy See, even in the context of the upcoming Paris summit on climate change – Stefanini was France’s special ambassador to international institutions on the subject for several years – has been presented by some in France as a “provocation.” Those “some” are said to include Prime Minister Manuel Valls, who has a personal axe to grind against the Manif pour Tous after having been criticized and ridiculed for his over-violent stance against its peaceful demonstrations in 2013, when he was still in his former post of minister for the interior.

The result of the media hype has been to provoke angry comments on the part of many conservative sources and pro-family websites demanding why France was choosing a “gay” man for the Villa Bonaparte, the residence of the French ambassador to the Holy See.

So far, so good. However, the situation turns out to be even more complex than it would appear. And the upshot of it all is already clear: destabilization of the pope, of the Church, and of the defenders of traditional marriage.

This is how things went. On March 13, the conservative weekly Valeurs actuelles published a short news item announcing that the Vatican had rejected the proposed new French ambassador on account of his homosexuality. It was the satirical magazine Le Canard enchaîné, which often obtains its unofficial inside information from official sources, that released Stefanini’s name a few weeks later, at the end of March, and from there on the item was published on several internet sources: official media, LGBT sites, and pro-family sites.

Last week the Journal du dimanche’s website announced that the pope himself was blocking the acceptance of Laurent Stefanini and that a personal intervention on the part of Ludovine de La Rochère, president of the “Manif pour Tous” that put hundreds of thousands in the streets of France to protest against same-sex “marriage,” had obtained this move. It was said that she had personally called the papal nuncio in France, Archbishop Luigi Ventura, in order to blackball the French diplomat. The JDD added that Cardinal André Vingt-Trois, archbishop of Paris, and Cardinal Tauran in Rome also intervened, but in support of the proposed ambassador.

The first interesting point is that Stefanini, before the press took hold of this affair, was not publicly known as a homosexual: reliable sources say he never touched the subject. He is 54, unmarried, without children; he also has no known companion. He is not known ever to have lobbied for gay rights or same-sex “marriage.” And he has continued not to express himself on the subject.

On the other hand he is known to be a practicing and even devout Catholic, having converted when in his thirties: he was confirmed by Cardinal André Vingt-Trois in 1998. Stefanini is one of the few remaining French people who still go to Mass every Sunday – 5 percent of the population – and has a profound interest for all things Catholic. He is also the official representative of the French Ministry of Foreign Affairs at the Order of Malta.

So many questions remain unanswered – and should probably have stayed that way: is Stefanini really “gay”? Is he a practicing homosexual? Those questions regard his private life and he has not taken the initiative of making the answers public. He was in any case 1st counselor of the French Embassy to the Holy See from 2001 to 2005, a post in which he earned the appreciation of the Curia, and occupied the post of special counselor for religious affairs at the French Ministry for Foreign Affairs on his return.

The second interesting point is that Ludovine de La Rochère flatly denies ever having intervened in order to obtain Stefanini’s refusal for the post of ambassador to the Holy See. She told LifeSiteNews she “fell off her chair” when reading about the allegations concerning her supposed call to the papal nuncio, having neither a reason nor any kind of authority to try to block his acceptance.

Reliable sources indicate that Stefanini’s nomination was considered for several months before his official presentation to the Holy See at the beginning of January and that both the Vatican and the French government were favorable.

This leaves us with a conundrum. A self-affirmed practicing Catholic, apparently supported by the Church’s hierarchy, is probably losing any chance of becoming French ambassador to the Holy See over media rumors concerning his real or supposed homosexuality. A mixture of true and false information has been spread whose consequences are embarrassing for all concerned, but which at the end of the day appear to be especially detrimental to the Church and to the French pro-traditional marriage movement. No one can say for certain whether he has been rejected by the Holy See or not, and if so, by whom – the Pope? – nor for what reason, if any. Apparently, a change of personnel at the Secretariat of State of the Holy See could explain the delay for Stefanini’s acceptance but that, again, is a conjecture.

Also: who had an interest in creating this public “scandal”? Is it a case of personal jealousy or resentment, or a move to put the Holy See in an uncomfortable position?

Several French media outlets are now suggesting that the French president, François Hollande, is refusing to back from his decision; and that Stefanini himself will not take the initiative of backing down. He has not made any public commentary on this point, however.

But someone, somewhere, must be enjoying the show.

France nominates reputed ‘gay’ ambassador to Holy See, but months later Pope Francis has yet to approve him