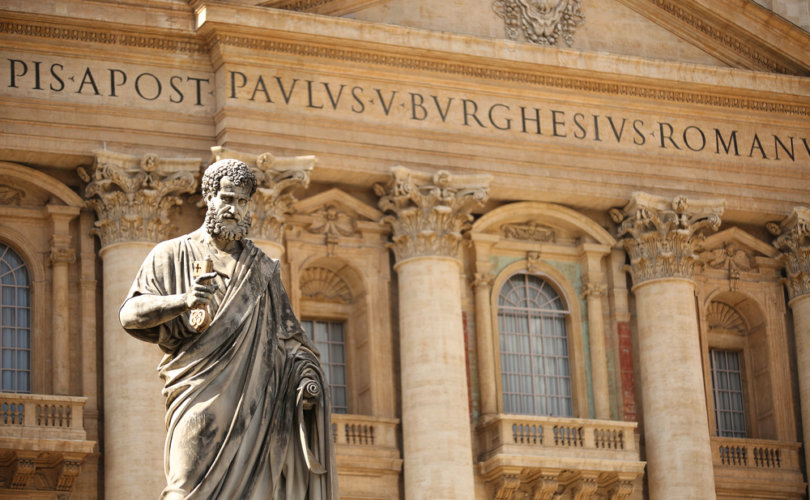 EDITOR'S NOTE: The following is the third of seven excerpts from a talk by Fr. Linus Clovis at the Catholic Truth Scotland Conference in June 2016. Part 1 is here and Part 2 is here. To read his presentation in its entirety, click here.

November 2, 2016 (LifeSiteNews) — In Genesis, we read that “the Lord God took the man and put him in the Garden of Eden to till it and keep it.”  That is, God assigned Adam two tasks: first he was to cultivate the Garden and secondly, he was to guard it.  His failure in the second task gave the serpent his opportunity. Christ entrusted to Simon Peter the visible leadership of the Church with the double task of feeding and tending the flock.  That is, as a good shepherd, he was to guard, protect and preach the Faith to the flock and so keep them from error and deception.

Our Lord, at the Last Supper, warned Peter that the serpent was already watching and merely waiting for an opportunity to attack. Specifically, with words expressing both what Satan desired and what God permitted, Christ said: “Simon, Simon, behold, Satan demanded to have you, that he might sift you like wheat, but I have prayed for you that your faith may not fail; and when you have turned again, strengthen your brethren.”

God permitted this trial for at least two reasons. First, that the Apostles might understand how weak they were of themselves and second that after their fall, they would rise again by His grace and would be cleansed and purified as sifted wheat.  Peter’s fall was followed by his sincere repentance and so, Christ not only granted mercy to him but also, confirmed Peter’s headship over the other Apostles and over the whole Church.

The slow development of Modernism, whose main tactic is the use of equivocation and confusion to spread lethal errors, was tracked by the popes of the 19th century.  Thus, Pius VI lifts the mask of Modernism in his Bull Auctorem Fidei:

In order not to shock the ears of Catholics, the innovators sought to hide the subtleties of their tortuous manoeuvres by the use of seemingly innocuous words such as would allow them to insinuate error into souls in the most gentle manner. Once the truth had been compromised, they could, by means of slight changes or additions in phraseology, distort the confession of the faith that is necessary for our salvation, and lead the faithful by subtle errors to their eternal damnation.  This manner of dissimulating and lying is vicious, regardless of the circumstances under which it is used. For very good reasons it can never be tolerated in a synod of which the principal glory consists above all in teaching the truth with clarity and excluding all danger of error.

Moreover, if all this is sinful, it cannot be excused in the way that one sees it being done, under the erroneous pretext that the seemingly shocking affirmations in one place are further developed along orthodox lines in other places, and even in yet other places corrected; as if allowing for the possibility of either affirming or denying the statement, or of leaving it up the personal inclinations of the individual – such has always been the fraudulent and daring method used by innovators to establish error. It allows for both the possibility of promoting error and of excusing it.

…  It is a most reprehensible technique for the insinuation of doctrinal errors and one condemned long ago by our predecessor St. Celestine who found it used in the writings of Nestorius, bishop of Constantinople, [who] was exposed and confounded, for he expressed himself in a plethora of words, mixing true things with others that were obscure; mixing at times one with the other in such a way that he was also able to confess those things which were denied while at the same time possessing a basis for denying those very sentences which he confessed.

Having clearly identified Modernism as a movement, St. Pius X was deeply concerned by its ability to allow its adherents to believe themselves loyal Catholics while their notion of evolution of dogma allowed them to hold markedly different understanding of the traditional Faith.  Therefore, he condemned both its aims and ideas in the document Lamentabili and in his encyclical Pascendi where sixty-five propositions were identified as Modernist heresies.  Then, in 1910, he followed up with the introduction of an anti-modernist oath, which was to be taken by all Catholic bishops, priests and academic teachers of religion.  Thus contained, Modernism went underground, until, like the genie in the bottle, it was freed in the wake of Vatican II.

St. Pius X saw clearly that the enemies of the Church had not only increased but, had also penetrated her walls:

“It must be confessed that the number of the enemies of the cross of Christ has in these last days increased exceedingly, who are striving, by arts, entirely new and full of subtlety, to destroy the vital energy of the Church, and, if they can, to overthrow utterly Christ’s kingdom itself.”…

“Hence, the danger is present almost in the very veins and heart of the Church, whose injury is the more certain from the very fact that their knowledge of her is more intimate. Moreover, they lay the axe not to the branches and shoots, but to the very root, that is, to the faith and its deepest fibres. And once having struck at this root of immortality, they proceed to diffuse poison through the whole tree, so that there is no part of Catholic truth which they leave untouched, none that they do not strive to corrupt.”

Pope John XXIII, however, saw things differently and, rejecting the admonitions of his predecessors about the dangers of Modernity, declared in his opening address at the Second Vatican Council:

“In the daily exercise of our pastoral office, we sometimes have to listen, much to our regret, to voices of persons who, though burning with zeal, are not endowed with too much sense of discretion or measure. In these modern times they can see nothing but prevarication and ruin. They say that our era, in comparison with past eras, is getting worse, and they behave as though they had learned nothing from history, which is, none the less, the teacher of life. They behave as though at the time of former Councils everything was a full triumph for the Christian idea and life and for proper religious liberty.

We feel we must disagree with those prophets of gloom, who are always forecasting disaster, as though the end of the world were at hand.

In the present order of things, Divine Providence is leading us to a new order of human relations which, by men's own efforts and even beyond their very expectations, are directed toward the fulfilment of God's superior and inscrutable designs. And everything, even human differences, leads to the greater good of the Church. …

At the outset of the Second Vatican Council, it is evident, as always, that the truth of the Lord will remain forever. We see, in fact, as one age succeeds another, that the opinions of men follow one another and exclude each other. And often errors vanish as quickly as they arise, like fog before the sun.  The Church has always opposed these errors. Frequently she has condemned them with the greatest severity. Nowadays however, the Spouse of Christ prefers to make use of the medicine of mercy rather than that of severity. She considers that she meets the needs of the present day by demonstrating the validity of her teaching rather than by condemnations.”

The last fifty years, since the close of the Council, has seen a sea change in the Catholic Church to the extent that today she cannot be easily recognised as the same institution of any previous century, so profoundly has the Council affected all aspects of Church life and practice.