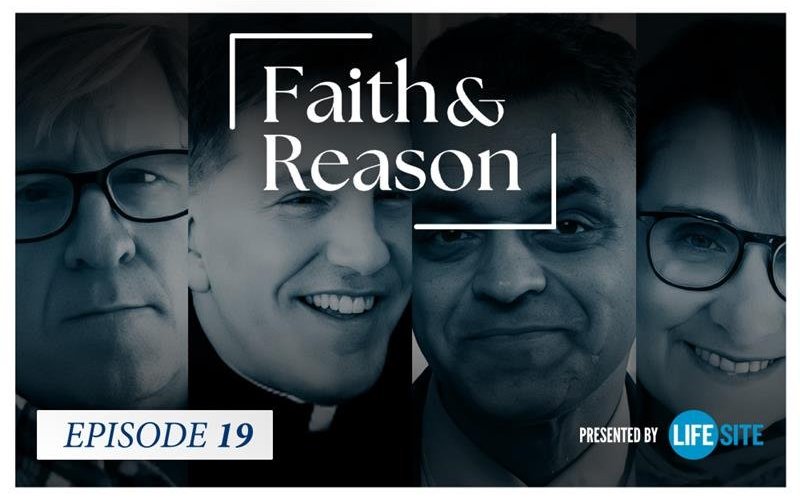 (LifeSiteNews) — This week on Faith & Reason, the panel reacts to the Supreme Court’s overturn of Roe v. Wade, Nancy Pelosi’s sacrilegious reception of Holy Communion at a Mass where Pope Francis was present, and Francis’ recent meeting with six “transgender” individuals in a papal audience.

Not only has the Supreme Court overturned Roe v. Wade, it has also delivered key victories for private school families in Maine and a high school football coach who prays on the field after games, among others.

“This has been a great week for bringing America back to God,” Liz Yore remarks. “John Adams, our 2nd [president], said, ‘Our Constitution was made only for a moral and religious people; it is wholly inadequate to the government of any other.’ So, in other words, if we’re not a moral and religious people, our Constitution is inadequate and will not stand up.”

As for Pelosi’s recent sacrilegious Holy Communion at St. Peter’s Basilica presided over by Pope Francis, Jack Maxey says we should raise the question of whether or not Francis has “abandoned his flock.”

“I think he has failed us,” he says. “He has failed the most innocent among us and gone absolutely against the teachings of Christ … I lean further and further towards the Rosary every day as the leadership of my Church abandons all of us.”

Speaking of Francis, he also met with a group of six “transgender” individuals in a papal audience last week. If the testimony of one of those individuals — who presented himself to Francis as a “transgender girl” — is to be believed, the pope told him “he didn’t care who I was” and to “always be myself, but not to be wrapped up in prejudice against the Church.”

Father James Altman, offering his take on the matter, notes that it’s the opposite of love to essentially affirm others in their sins.

“God doesn’t hate them and we don’t either,” he says. “It is an act of love to call them out of their sin so that they can attain salvation. It’s an act of love, not of hate, to condemn the sin.”