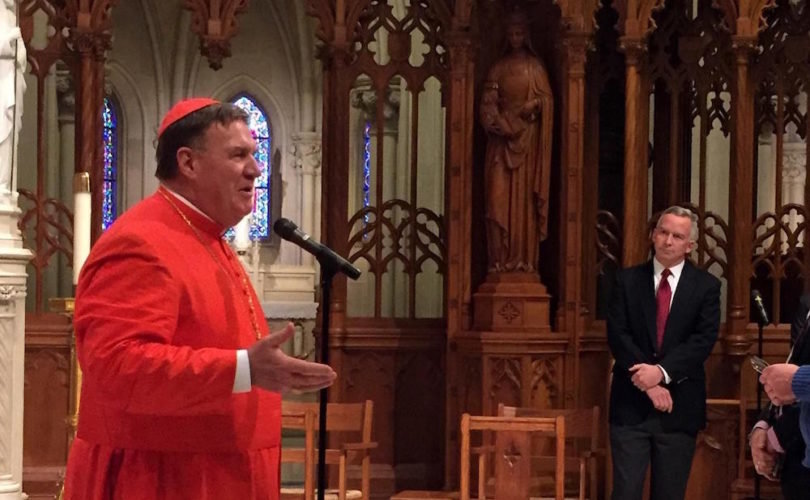 Cardinal Joseph Tobin speaks to the 'LGBT Pilgrimage' at his cathedral in Newark.Fr. James Martin / Facebook

May 26, 2017 (LifeSiteNews) — On Sunday, May 21, Cardinal Joseph Tobin personally welcomed homosexuals to the Cathedral Basilica of the Sacred Heart in Newark as part of a so-called “LGBT Pilgrimage.”

It’s unclear how many were expected to attend, but photographs of the event suggest a modest turnout for a New York City area event.

On his Facebook page, Fr. James Martin, SJ—lauded by Catholic dissident, Sister Jeannine Gramick, co-founder of New Ways Ministry, for showing “how the Rosary and the rainbow flag can peacefully meet each other,”—delivered a congratulatory message to the Cardinal, saying, “Bravo!”

Interestingly, Cardinal Tobin is one of the top Vatican and United States church officials who has praised Fr. Martin for his soon to be published gay-friendly book, Building A Bridge: How the Catholic Church and the LGBT Community Can Enter into a Relationship of Respect, Compassion, and Sensitivity.

Martin continued, “I salute His Eminence for his welcome of a group that often feels excluded from their own church.”

Martin is one of a small but growing group of influential clerics who seek to overturn magisterial teaching and to defy natural law by embracing homosexual relationships as fully comparable to that which exists between husband and wife.

The event was organized by the Newark Archdiocese in conjunction with the Interfatih Collaborative, a group which “encourages dialogue to promote effective models of LGBT ministry.” According to the group’s webpage, Cardinal Tobin was joined by other regional clerics.  “Fr. Francis Gargani, C.Ss.R., assisted by a deacon of the Archdiocese, presided in the presence of Bishop Cruz, rector of the cathedral. Several priests from various orders and dioceses concelebrated as well. Before bestowing his final blessing, Bishop Cruz spoke of his favorite view of the basilica is when the doors are open wide to welcome all to the love of God.”

LifeSiteNews reached out to the Newark Archdiocesan Communications Office, the Interparish Collaborative, and New Ways Ministry for comment following the event but all declined or were unavailable.