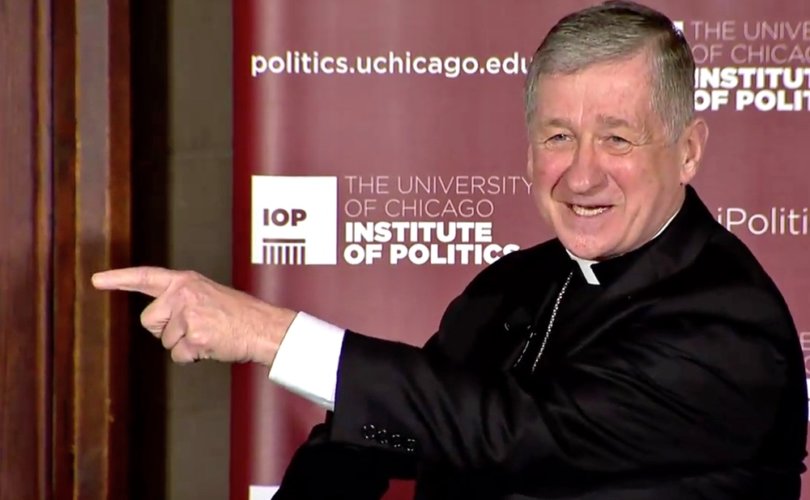 “He really is one of the, if not the foremost evangelizer in the Church today, especially for young people,” said the Pope Francis-appointed Cardinal, who is the Archbishop of Chicago, while speaking at The University of Chicago Institute of Politics on Monday.

Martin, a Vatican consultant and editor-at-large of the Jesuit-run America magazine, is one of the most recognized proponents of homosexuality within the Catholic Church today.

The Jesuit priest has called for the Church to change its language about homosexuality, especially as found in the Catechism of the Catholic Church. He has expressed his hope that in the near future same-sex couples will be able to “kiss” during the sign of peace at Mass. He has said that some saints in heaven are “probably gay.” He has dismissed Catholic teaching, saying God made homosexuals “who they are.”

With the publication of his June 2016 book Building a Bridge, Fr. Martin has been able to push his campaign against Church teaching on homosexuality to major media outlets as well as through his massive social media following.

Cardinal Cupich, during his speech on Monday, praised the priest’s message.

“I appreciate what he’s doing,” he said.

“I think he has a wonderful message and the way that he brings that message to people,” he added later in his talk.

The Cardinal slammed people who have criticized Fr. Martin’s message, saying they “have never read anything that he’s ever written … because they said things about him that were not in the book.”

Fr. Martin has been criticized by numerous high-ranking churchmen and a number of respected Catholic lay academics for dissenting from Catholic sexual teaching.

Cardinal Robert Sarah, Prefect of the Congregation for Divine Worship and the Discipline of the Sacraments, wrote in The Wall Street Journal in August that the priest’s book has made him “one of the most outspoken critics of the church’s message with regard to sexuality.”

Based on their comments and criticisms, both prelates appear to have thoroughly read Martin’s book.

Cardinal Cupich defended during his talk his invitation to Fr. Martin to give a Lenten series in his Archdiocese next year.

“I felt it was a matter of justice to speak up on behalf of him and to support him, but then also to do something actively, proactively, and that is invite him here and give him a platform to speak to people about the topic that he likes to talk about most, namely Jesus,” he said.

“It seems to me that you have to take a stance sometimes and say ‘this is wrong.’ And just because you have all of this hyperbole and many ways of diminishing this man who's done nothing but live his life in a way that helps other people and to have his name dragged through the mud for no good reason, sometimes you just have to stand up and say, ‘enough of this, we have to do something about it,’” he added.

Cardinal Cupich has rapidly risen to prominence under Pope Francis. Before becoming cardinal in 2016, he was appointed by Pope Francis to the influential Vatican Congregation for Bishops that recommends candidates to be appointed bishops.

He said in a recent talk that if Catholics want to engage in “discernment” like Pope Francis does, they must let go of “cherished beliefs.”

He has interpreted the Pope’s 2016 exhortation Amoris Laetitia (Joy of Love) as a call for Catholics to graduate from “an adolescent spirituality into an adult spirituality” where they will be able to use their “freedom of conscience” to “discern truth” in their life.