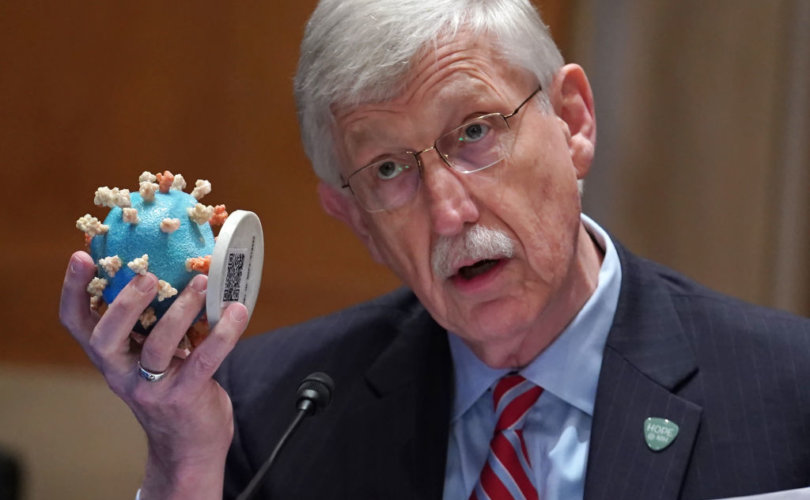 It instead advocated “Focused Protection,” meaning “allow[ing] those who are at minimal risk of death to live their lives normally to build up immunity to the virus through natural infection, while better protecting those who are at highest risk.”

Fauci replied to the email by sharing several articles critical of herd immunity. At the time he also publicly denounced the Declaration (which the Trump administration had embraced at the time) as “total nonsense” that would cost people’s lives, but lamented later in the private email chain that the White House was “too busy with other things to be worried about this.” The emails go on to show various health bureaucrats agreeing on the need to publicly discredit the Declaration and its sympathizers, such as Dr. Scott Atlas.

Fauci responds immediately by circulating an article against the GBD from that austere scientific authority, @WiredUK. pic.twitter.com/GSnvJGLwOi

The next day, Fauci sends Collins an angry rant against the GBD in the @TheNation by @gregggonsalves.

Over the weekend, Collins launches the smear campaign against the GBD in the Washington Post.https://t.co/WwrcdJUoC4 pic.twitter.com/xw42r2WGqR

On the morning of the Covid task force meeting, Fauci sends Deborah Birx this email alerting her about the need to oppose the GBD at the meeting. The unredacted part suggests they are preparing to attack @ScottWAtlas, who was perceived as the task force's champion of the GBD. pic.twitter.com/iqYbiTiZxo

“A public debate would have been better” than a “published take down,” Kulldorff said of the emails, telling Collins the invitation was “still open.”

“So now I know what it feels like to be the subject of a propaganda attack by my own government,” Bhattacharya responded. “Discussion and engagement would have been a better path.”

Over the weekend, Collins stood by his condemnation of the Declaration’s authors in an interview with Fox News’ Bret Baier.

“I did write that, and I will stand by that,” he said. “Basically, these fringe epidemiologists who really did not have the credentials to be making such a grand sweeping statement, were saying just let the virus run through the population and eventually then everybody would have had it and everything will be okay.”

Bhattacharya responded to the interview at length on social media, arguing that Collins had misrepresented the Declaration’s argument:

We now know the origin of the term — it came from the mind of Collins and Fauci. When reporters started asking me why I wanted to "let the virus rip", I was puzzled. Now I know that Collins & Fauci primed the media attack with the lie.
(2/n)https://t.co/qrWLc94FD1

As @MartinKulldorff has said, it makes as much sense to say "herd immunity strategy" as it does to say "gravity strategy" for landing an airplane. The only question is how to land safely, not whether gravity applies. (4/n)https://t.co/fTmaFujBQ5

Lockdowners like Collins & Fauci presumably think that focused protection of vulnerable is impossible. They could have engaged honestly in a discussion about it, but would have found that public health is fundamentally about focused protection.
(6/n)

For instance, the economic devastation of poor counties caused by rich countries shutting down has contributed to tens of millions facing starvation. I could list many more harms… We will need to work hard to reverse the damage. (12/n)@collateralglbl https://t.co/n07M5Pji3K

The conflict of interest created here is at least as great as traditionally recognized conflicts that, for instance, pharma-funded scientists face. Collins and Fauci should have recused themselves from COVID policymaking. (19/n)

Collins claimed in the emails that “hundreds of thousands of people would have died if we had followed [the Barrington Declaration’s] strategy.” In fact, American COVID deaths have risen by more than 600,000 in the time since the Declaration was written, despite the United States’ emphasis on lockdowns, masking, and vaccination.

In April, Simon Fraser University economics professor Douglas Allen published a study reviewing more than 80 research papers on lockdowns across the world, which concluded that while lockdowns saved 22,333 years’ worth of lost life they also caused 6.3 million years of lost life, making the policy’s long-term harm 282 times worse than its benefits, thanks to the combined toll of canceled or delayed care for other medical issues, and the psychological harm of lost jobs and social isolation, among other factors.

In October, a study by Marine Baudin, Jérémie Mercier, and Denis Rancourt found the U.S. COVID death toll is actually due to “persistent chronic psychological stress induced by the long-lasting government-imposed societal and economic transformations during the COVID-era [which] converted the existing societal (poverty), public-health (obesity) and hot-climate risk factors into deadly agents.”

That study also argues that many “COVID-19-assigned deaths may be misdiagnosed bacterial pneumonia deaths,” and that the “massive vaccination campaign … had no detectable mitigating effect, and may have contributed to making the younger population more vulnerable,” presumably by encouraging riskier behavior through exaggerated impressions of the vaccines’ effectiveness.

A body of data suggests that the mass vaccination strategy for defeating COVID-19 has failed. The federal government considers more than 204 million Americans (61% of the eligible) to be “fully vaccinated” (a moving target given the vaccines’ temporary nature), yet ABC News reported in October that more Americans died of COVID-19 this year (353,000) than in all of 2020 (352,000), according to data from Johns Hopkins University.

Additionally, evidence suggests that masks played little, if any, role in reducing COVID-19’s spread across the United States. In May, a study found that, though mandates effectively resulted in higher levels of mask wearing, “mask mandates and use (were) not associated with lower SARS-CoV-2 spread among U.S. states” from March 2020 to March 2021.

This is far from the first controversy involving Collins, whose last day at NIH was December 19. He announced his resignation in October, following the release of 900 pages of documents on NIH’s funding of “gain-of-function” research to make bat coronaviruses more transmissible to humans. In 2018, Collins defended federal funding for research using tissue from aborted babies.