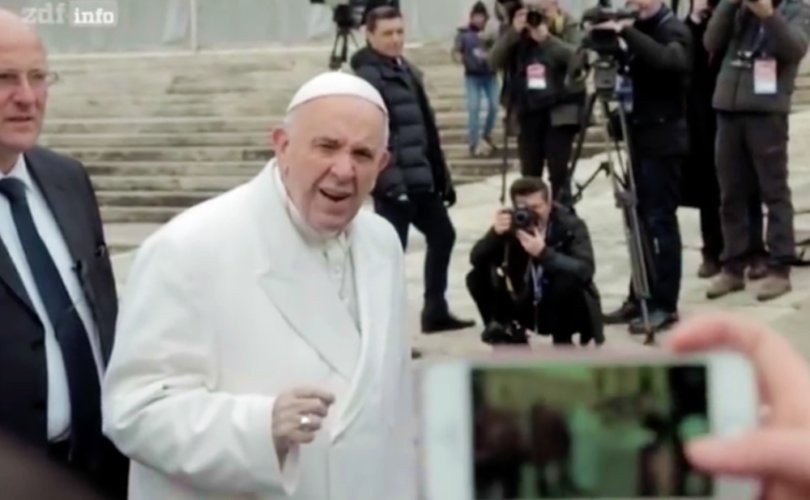 Pope Francis' gives a stunned expression when asked by reporter in 'Silence of the Shepherds' documentary if he covered-up for an abusive priest in Argentina.ZDF / Youtube screen grab

September 4, 2018 (LifeSiteNews) – German national TV channel ZDF is rerunning a documentary produced last year that claims that Pope Francis, as Archbishop Bergoglio of Buenos Aires, ignored cries for justice from abuse victims in his diocese. The documentary is now gaining traction in the fallout of Archbishop Viganò’s testimony that the Pope covered-up the abuse of now ex-Cardinal Theodore McCarrick.

The documentary also claims that then-Archbishop Bergoglio, prior to becoming the pope, participated in the unsuccessful defense of a priest accused of abuse. That priest has now been imprisoned for 15 years after he was found guilty of sexually abusing children.

Now, in light of the Viganò report, the documentary by Martin Boudot has been aired again and is now making the rounds in the German-speaking world. The documentary, titled “The Silence of the Shepherds,” won the 2017 Prix Europa for best European documentaries. It is available in the U.S. under the title “Sex Abuse in the Church: the Code of Silence.”

The documentary makes the case that many priests accused of sexual abuse were merely transferred by their bishops to other countries so as to avoid prosecution. The second half of the documentary highlights Archbishop Jorge Bergoglio's own conduct in Buenos Aires.

The film quotes a 2010 book titled in French Sur la terre comme au ciel (On Heaven and Earth) written by both Jorge Bergoglio and Rabbi Abraham Skorka. In this book, Bergoglio stated that in his diocese there were no pedophile priests, according to the film.

LifeSiteNews found that specific quote on page 50 of the English version. Here is what Jorge Bergoglio as archbishop says when speaking about pedophile priests:

“Now, when it happens, you can never turn a blind eye. You cannot be in a position of power and destroy the life of another person.” “In my diocese it never happened to me,” Bergoglio added. He then described what counsel he once gave to a fellow bishop who had such a case. “I told him to take away the priest's faculties, not to permit him to exercise his priestly ministry again, and to initiate a canonical trial.”

When Bergoglio became Pope Francis in 2013, he appears to have ignored his own advice. This is evidenced in the case of known-child molester Fr. Mauro Inzoli, whom the Pope, against the advice of Cardinal Gerhard Müller, reinstated giving back to him some of his priestly faculties.

The documentary reveals, however, how Bergoglio himself, when writing his 2010 book, had indeed had such a case of a pedophile priest in a neighboring diocese and that he was intimately involved in the case. It is the now-infamous Father Julio César Grassi who has been imprisoned for 15 years because of his abuse of children who were entrusted to his care in the “Happy Children Foundation” orphanage.

The documentary highlighted six alleged victims of abuse who all claimed that then-Archbishop Bergoglio never answered their own specific complaints when they wrote to him as the archbishop of Buenos Aires.

When asked by the documentary journalists whether or not they ever received an answer, they all shook their heads in the negative. Asked about the above-quoted statement that Bergoglio never having a pedophile priest in his diocese and whether he says here the truth, one abuse victim, a woman, answered: “He wants people to believe that, but it is a lie.”

Despite contacting the future pope with allegations against abusive priests, “none of us” received an answer, was the reply by one abuse victim.

“He receives all the celebrities like Leonardo diCaprio” continued a woman, “but for us, not even a quick letter to say he was sorry.”

“I don't expect anything from him. I do not believe in him,” added another woman.

A third woman explained: “I suffered a lot, and I'm very disappointed.” This woman spoke with tears in her eyes: “Because the Pope did nothing when he was archbishop here.” “Everyone told me,” she continued, “write to him, he's bound to reply. But nothing.”

Reflecting on these replies, the commentator said: “As archbishop of Buenos Aires, Pope Francis was seemingly deaf to the distress of these victims.”

As the documentary continues, highlighting other cases of victims, some put forward their belief that Bergoglio “willfully tried to divert the course of justice.”

Reference was here made to Father Grassi. “The Argentinian Church did all in its power to have him acquitted,” explained the speaker. Juan Pablo Gallego, the defense attorney of the abuse victims, pointed out that the Argentine bishops in 2010 – after the first punitive sentence was spoken about Grassi – had asked a penal law professor (Marcelo A. Sancinetti) to conduct a study, which was compiled in a confidential dossier for internal use, dealing with the Grassi case.

This dossier, which was called “Studies on the Grassi Case” and contained 2,800 pages, came to the conclusion that “the court was wrong,” that Grassi was innocent and therefore should be acquitted. The author also claimed that the abused children spread “falsifications, lies, deceit and invention.”

This study, as the documentary pointed out, was made on behalf of the Argentine bishops under the leadership of Archbishop Jorge Bergoglio, who was, at that time, also the President of the Argentine Bishops' Conference (2005-2011). This information is written on the back cover of the dossier. “So the Pope,” the speaker in the documentary concluded, “did then commission a counter-inquiry to try to have a priest who had been sentenced for pedophilia acquitted.”

“And it is said,” the speaker in the documentary continued, “that Jorge Bergoglio, the future Pope, actually sent it to the judges, with a shrewd sense of timing, before Father Grassi's various appeal hearings.” Carlos Mahiques was one of these judges. In an interview for this documentary, he made it clear that this study, as ordered by Bergoglio, “is in some areas partial, and extremely partial in others,” and that is why he, as judge, did not allow himself to be influenced by it.

“It was clearly in favor of Father Grassi,” the judge said. “They were trying to exert a subtle form of pressure on the judges.” When asked whether he thought the Church tried to influence the judges, Mahiques replied: “That's totally correct.”

In an interview in the documentary with one of the abuse victims of Father Grassi, it becomes clear that Grassi claimed to stand under the protection of Bergoglio.

“Bergoglio never let go of my hand,” are the words as they are quoted by the abuse victim who claimed to have heard them from Grassi himself. The victim continued, saying that Bergoglio now “is Pope Francis, but he has never gone against Grassi’s words. So I’m certain that he never did let go of Grassi’s hand!”

The documentary states that, Bergoglio, as Pope Francis “never publicly commented on the Grassi case.” The journalists themselves had tried for eight months to obtain an interview with the pontiff on the subject, but to no avail. Since they failed, the journalists stood in line at Saint Peter's during one of the papal audiences and were able to call out to Pope Francis: “Your Holiness! Your Holiness, in the Grassi case, did you try to influence Argentine justice?” Pope Francis, making a stunned face (caught on film here in the documentary), replied “No!” The journalists continued, saying: “No? Then why did you commission a counter-inquiry?” The Pope responded, with a similar face: “I never did.” The documentary then asks: “How can the Catholic Church retrieve itself from these guilty silences?”

Grassi was until recently still on the official list of the diocese of Morón, a suffragan diocese of the Archdiocese of Buenos Aires (on today's list, however, his name is missing). It appears that Grassi was never laicized, at least not under Bergoglio.