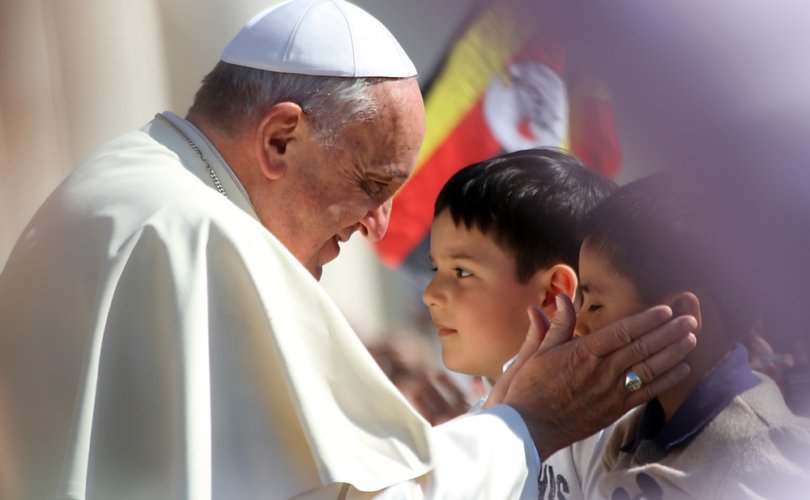 (Editor’s note: A previous version of this story had misquoted Vatican conference speaker Peter Raven as saying, “Pope Francis has urged us to have fewer children to make the world more sustainable.” After reviewing the recording of his remarks that quote has been corrected. Read our correciton notice here.)

ROME,  March 3, 2017 (LifeSiteNews) — “We need at some point to have a limited number of people which is why Pope Francis and his three most recent predecessors have always argued that you should not have more children than you can bring up properly,” a panelist at a Vatican-run workshop on “how to save the natural world” claimed on Thursday.

This solution to securing the world’s sustainability was presented by botanist and environmentalist Peter Raven during a press conference that concluded the “Biological Extinction” workshop that took place at the Vatican earlier this week.

“We do not endorse any of the artificial birth control [methods] that the Church does not endorse,” said Raven.

The Church condemns every method of artificial birth control.

The Catechism of the Catholic Church states that “every action which, whether in anticipation of the conjugal act, or in its accomplishment, or in the development of its natural consequences, proposes, whether as an end or as a means, to render procreation impossible is intrinsically evil” since it destroys the unitive and procreative integrity of the marital act.

The Church teaches that a married couple who wishes to postpone pregnancy for a “grave” reason may do so by not engaging in the marital act during the fertile period.

According to Raven, the central element of the solution for “overpopulation” is that “we need a more limited number of people in the world.” In addition, “the problem is one of inequality,” where the rich use more of the world’s resources than the poor.

“In the framework of social justice worldwide we need to find ways for natural resources to be distributed on the basis of compassion and love. We hope for support in our ongoing support for our endeavor to develop sustainability,” he said.

All four on the panel concurred that the survival of the planet is tightly linked to the number of people on the planet.

The Biological Extinction workshop drew particular controversy because it featured a paper by notorious pro-abortion population control advocate Dr. Paul Ehrlich. At the event Ehrlich, and co-author Dasgupta, said that the Catholic teaching of “responsible parenthood” in determining family size has “result[ed] in collective failure” in reducing the world’s population.

The authors suggested that one way to stop the exhaustion of “humanity’s natural capital” is by imposing a system of “taxes and regulations” that would help modify “social norms of behaviour.”

RELATED: Population controllers to Vatican: ‘Responsible parenthood’ has failed. Use ‘taxes and regulations’ to reduce population

Just days before the conference, Ehrlich, who has defended forced abortion and mass forced sterilization as legitimate means to control the world’s population, advocated in an interview with The Guardian for cutting the world's population by 6 billion people to bring it down to 1 billion.

In the paper's words, he said doing so would have an “overall pro-life effect.” The paper indicated he believed this could “sustain many more human lives in the long term compared with our current uncontrolled growth and prospect of sudden collapse.”

When LifeSiteNews asked the panelists at the Vatican press conference if any scientists were invited to the conference who held an alternative view on the world’s population, Bishop Sorondo replied: “You can see the papers, since everything was published on the website, the texts and the discussions.”

Sorondo said that while “there were different opinions on population” during the conference’s discussions, the participants reached two conclusions: “That the carbonization (pollution) of the air is not caused by the number of human beings, but by the activity of humans who use the materials at hand” and that “in order to have an integral environment, biodiversity must be conserved – [and] that also depends on human activity.”

Dasgupta, Ehrlich's co-author, said during the panel that the number of humans on the planet is not sustainable. He added that humans must arrive at a point where their numbers are determined by how “the earth can replenish herself.”

Upon LifeSiteNews’ question about what this point would look like and how many people would be ideal for the planet, Dasgupta answered: “We should not calculate that. The number of humans depends on standards of living, or quality of life. It depends on the total demand that we make on Mother Nature. If humans were not here there would be other factors.”

While leaving the question essentially unanswered, Dasgupta presented the solution of “working backwards,” stating that “we have to figure out the human impact on Mother Nature on an annual basis: If the impact grows, we will be concerned. If the impact is reduced, then mother nature will replenish.”

He suggested that the “best step forward” to begin curbing “population growth” would be with a “focus on the family and education.” He did not clarify what such “education” might entail.

The Catholic Church condemns coercive population control methods. Instead of seeing people as ‘mouths to feed,’ ‘pollution producers,’ or ‘carbon footprint makers,’ the Church sees each and every person as a unique and unrepeatable gift from God. Created in the image and likeness of God, and redeemed by Jesus Christ, the Church teaches that each person is filled with the greatest dignity as a son or daughter of God who is ultimately called to eternal beatitude in the Kingdom of God.

Earlier this week a global coalition of Catholic pro-life and pro-family organizations urged Catholics to “resist” the Vatican's increasing alliance with the leftist agenda, specifically as championed by the United Nations, warning that such an alliance poses an “immediate and serious threat” to children and the family.