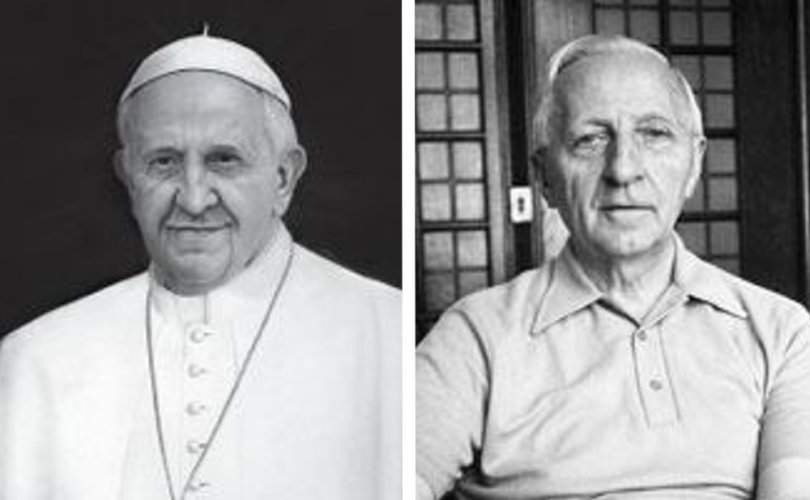 ROME, November 24, 2016 (LifeSiteNews) – Pope Francis has praised the 1960s German moral theologian Bernard Häring, one of the most prominent dissenters from Pope Paul VI’s 1968 encyclical Humanae Vitae, for his new morality which the pope said helped “moral theology to flourish.”

“I think Bernard Häring was the first to start looking for a new way to help moral theology to flourish again,” he said in comments, published today by La Civiltà Cattolica, that were given during a dialogue with the Jesuit order which was gathered for its 36th general Congregation on October 24, 2016 in Rome.

Pope Francis gave his comments while answering a question about a morality he has often spoken about based on “discernment.”

“Discernment is the key element: the capacity for discernment. I note the absence of discernment in the formation of priests. We run the risk of getting used to 'white or black,' to that which is legal. We are rather closed, in general, to discernment. One thing is clear: today, in a certain number of seminaries, a rigidity that is far from a discernment of situations has been introduced. And that is dangerous, because it can lead us to a conception of morality that has a casuistic sense,” he said.

“The whole moral sphere was restricted to ‘you can,’ ‘you cannot,’ ‘up to here yes but not there,’” he said.

“It was a morality very foreign to ‘discernment,’” he said, adding that Bernard Häring was the “first to start looking for a new way to help moral theology to flourish again.”

Fr. Bernard Häring (1912-98) was a key figure during the Second Vatican Council, where he applied the principle of the evolution of dogma (as found in the nouvelle théologie) to morality. According to Professor Roberto de Mattei, this “new morality” championed by Häring ultimately “den[ied] the existence of an absolute and immutable natural law.”

Häring was first appointed an “expert” at Vatican II and then later became the secretary of the Commission on the modern world, where, according to de Mattei, he became one of the primary architects of the document Gaudium et Spes (Joy and Hope), part of which deals with marriage.

According to de Mattei, a vicious battle was waged during the crafting of this document between the progressive and traditional minorities over procreation in marriage.

“This battle went beyond the pill to include the ends of marriage. At issue was the very basis of natural law itself,” he said in a talk given at the Rome Life Forum in 2015.

The progressive element, backed by Häring, eventually prevailed upon Pope Paul VI to leave aside the question of contraception in the document, according to de Mattei.

“The most surprising aspect of Gaudium et Spes, however, is the lack of any presentation of the traditional order of the ends of marriage, the primary and the secondary….The institution of marriage, therefore, is defined without any reference to children and only as an intimate community of conjugal life. Moreover, in the succeeding paragraphs, conjugal love is discussed first (paragraph 49) and procreation second (paragraph 50),” said de Mattei.

After Paul VI released Humanae Vitae in 1968 where he taught unequivocally that “each and every marriage act must remain open to the transmission of human life” and called the use of contraception “intrinsically wrong,” Häring spent his energy in criticizing not only Paul VI, but also Pope John Paul II, for their stances on birth control and other sexual issues.

Häring was eventually investigated by the Congregation for the Doctrine of the Faith (CDF) in the 1970s for his 1972 book Medical Ethics, where he presents a concept of health that would allow a couple to use contraception if they deemed it the best means to help them fulfill their total vocation, a principle condemned in Humanae Vitae.

Häring became the mentor of Charles Curran, a dissident Catholic priest who aggressively condemned the Church’s teachings on matters such as abortion, contraception, and homosexuality. Curran, who was also investigated by the CDF in the late 1970s and early 1980s, was officially prohibited by Pope John Paul II in 1986 from teaching at any Catholic school and was stripped of the title ‘Catholic theologian.’

Francis called it an “important task” of the Society of Jesus that they “form seminarians and priests in the morality of ‘discernment.’”

It was using the method of “discernment” in response to the Zika virus scare earlier this year that Pope Francis appeared to condone the use of contraception for married couples living in affected areas as the “lesser of two evils.” Vatican spokesman Fr. Federico Lombardi confirmed the pope’s words the following day, stating: “The contraceptive or condom, in particular cases of emergency or gravity, could be the object of ‘discernment’ in a serious case of conscience. This is what the Pope said.” Critics said the pope’s move contradicted previous Catholic teaching (see here, here, and here).

Pope Francis also spoke about the morality of “discernment” in his April exhortation Amoris Laetitia more than thirty times, using the term as a key to opening the door to Holy Communion for Catholics living in adulterous situations. Immediately following the “smoking footnote” 351, in which critics say the pope allowed the divorced and remarried to receive Holy Communion, the pope writes that “discernment must help to find possible ways of responding to God and growing in the midst of limits.”

Four cardinals have recently asked the pope to clarify key passages in the exhortation, asking him a set of five yes-or-no questions regarding the indissolubility of marriage, the existence of absolute moral norms, and the role of conscience in making decisions. They went public with their “dubia” last week after the pope failed to reply.

During his dialogue with the Jesuits, Pope Francis noted the progress that has been made in moral theology since the days of “you can, you cannot.”

“Obviously, in our day moral theology has made much progress in its reflections and in its maturity,” he said.