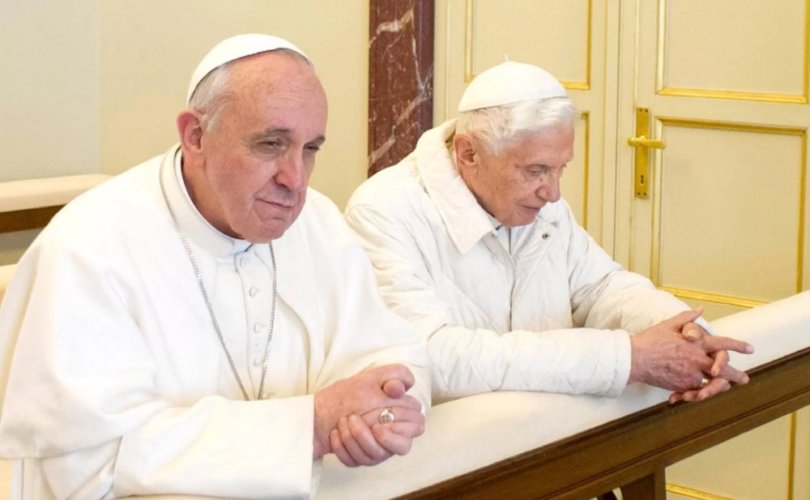 VATICAN CITY, April 11, 2019 (LifeSiteNews) – Overnight reactions to Pope Emeritus Benedict’s April 10 letter about the sexual abuse crisis were mixed, with many of Pope Francis' most vocal champions criticizing it while those who are more cautious about the current pontificate praised it.

Traditional-minded Catholics tended to read the work with respect, noting the importance of Benedict’s testimony. Some suggested that he hadn’t dealt with the issues surrounding the abuse crisis sufficiently, however, while others wondered about the letter’s authenticity.

C.C. Pecknold, a professor of theology at the Catholic University of America, wrote today in the Catholic Herald, that the Pope Emeritus’ intervention was important. He was particularly struck by Benedict’s candid description of homosexuality in the post ‘68 seminaries.

“In what will surely be some of the most-quoted lines of Benedict’s letter, he attends to the way this moral and sexual revolution infected the seminaries: “In various seminaries homosexual clubs were established, which acted more or less openly and significantly changed the climate in the seminaries,” Pecknold cited.

“He recalls how a bishop, a former seminary rector “arranged for the seminarians to be shown pornographic films, allegedly with the intention of thus making them resistant to behavior contrary to the Faith.” Visitations of seminaries would be arranged which produced nothing or very little, Benedict admits, because those who ran them were colluding in covering up the new permissive hierarchies of sexual release,” he continued.

Pecknold concluded that Benedict’s central idea–that the absence of God in society is responsible for clerical sexual abuse–will be met with some indifference but will nevertheless be the “answer” to the problem that endures.

Phil Lawler, editor of Catholic World News, said the letter reveals that the two popes are “miles apart” when it comes to dealing with the causes of the abuse crisis.

“The two Popes, past and present, are miles apart in their analysis of the sex-abuse scandal. Nowhere does Benedict mention 'clericalism;' Pope Francis does not speak about the moral breakdown that Benedict blames for the scandal,” he wrote.

R.R. Reno, editor of First Things, believes that the letter, which Benedict plans to publish in a Bavarian magazine, is more of a “testimony” regarding the tumult in the Church, rather than an “analysis.”

Nevertheless, Reno extrapolates from the 91-year-old Pope Emeritus’ letter to point out how and why 20th-century events and currents led to the watershed year of 1968 and weakened the Catholic Church.

“The overall impression [of Benedict’s letter]: Overwhelmed by the Revolution of ’68, riddled with dissent, and structured by institutional and canonical assumptions ill-suited to present realities, the Catholic Church has become an ungovernable mess,” Reno wrote.

Reno appreciated that Benedict mentions the effect the cultural revolution of ‘68 had on the Church but said he wished the Pope Emeritus had also admitted that the Second Vatican Council had its own influence on the Swinging Sixties.

“There can be little doubt that Vatican II functioned as a triggering mechanism during the explosive 1960s. It signaled to the West that the epitome of unchanging truth was reconsidering, rethinking, reframing—in a word, revising,” Reno stated.

“If the Pope Emeritus wishes to give an adequate account of the historical context for the failure of moral discipline among the clergy, he needs to reckon with the Church’s profound role in the Revolution of ’68, not just her fate in its aftermath.” he added.

Fr. John Zuhlsdorf, author of “Father Z’s Blog”, said both that the letter is a “scolding” of the German clergy and also meant to be read by the entire world.

“The MSM will be excited about the title: The Church and the Scandal of Sexual Abuse,” Zuhlsdorf added drily.

The priest-blogger felt that the Pope Emeritus hadn’t offered any solutions and also that he failed to make a few “explicit connections.” However, Zuhlsdorf found the letter a moving cry from the heart.

“…there is a poignant cri de coeur in this piece, which leads the attentive reader to [Benedict’s] point. He describes the Church as going through her Job period of testing and purification and serious down-sizing,” the priest wrote.

“I wonder if he had an experience like Leo XIII, who overheard God and the Devil dickering over the Church for a century of trial. Benedict points to the loss of the sense of Mystery in worship, especially regarding to Eucharist, and the Church. He underscores the importance of natural law in moral theology and the connection of doctrine and law. Hence, he interconnects Cult, Code, and Creed,” Zuhlsdorf continued.

“His underlying foundation is lex orandi, lex credendi and lex vivendi. It has to be. But these are out of sorts, because weeds in the field and evil fish in the nets have disconnected them and tried to rebuild the Church in human terms. I especially liked his shot: “What must be done? Perhaps we should create another Church for things to work out? Well, that experiment has already been undertaken and has already failed.”

Zuhlsdorf said that he could sense the Pope Emeritus’ “great pain.”

Rod Dreher, a former Catholic convert and the author of the Benedict Option, published sections of the letter in his column at The American Conservative. Dreher called the reflection “extraordinary.”

The columnist, who believes the only way Christendom can survive is through intentional communities, was particularly delighted by Benedict’s thoughts on the need to revive the early catechumenate.

“In the old Church, the catechumenate was created as a habitat against an increasingly demoralized culture, in which the distinctive and fresh aspects of the Christian way of life were practiced and at the same time protected from the common way of life,” Benedict wrote.

“I think that even today something like catechumenal communities are necessary so that Christian life can assert itself in its own way.”

Dreher saw in this a reflection of his own ideas.

“That puts the praise that his personal secretary, Archbishop Gänswein, had last year for The Benedict Option in a certain light!” he stated.

“So I’m excited to see this paragraph from BXVI’s own hand. Sue me.”

LifeSiteNews' own John-Henry Westen said the letter “gives as a solution to the crisis a return to a demonstrative belief in God and also a return to respect for the Holy Eucharist.”

Catholics who see Pope Francis as a champion of change tended to hold the Pope Emeritus’ letter in derision.

Church historian Massimo Faggioli, a professor at Villanova University, wrote on Twitter that the Pope Emeritus had made a “misstep” and listed other mistakes he believed Benedict had made.

“Today’s misstep by B16 reminds me of other missteps: the book co-authored with Pera, the Regensburg speech, the baptism of Magdi Allam in St Peter,” he stated.

“The idea that ecclesial abuse of children was a result of the 1960s, a supposed collapse of moral theology, and ‘conciliarity’ is an embarrassingly wrong explanation for the systemic abuse of children and its coverup,” Flanagan wrote via Twitter.

Journalist Robert Mickens, who has worked for both Vatican Radio and the UK’s left-wing Catholic newspaper The Tablet, tweeted, “What world does this man live in?” and “Someone needs a box of Crayolas and some coloring books.”

However, not all members of “Team Francis” were as dismissive of the retired pontiff.

Fr. James Martin, SJ, editor-at-large of America magazine, was respectful to the Pope Emeritus while finding fault with his focus on heterodoxy.

“I have the greatest respect for Pope Emeritus Benedict XVI, especially as a theologian,” he stated over Twitter. “However, I disagree with most of his analysis of the sex abuse crisis. Blaming it on poor theology and the sexual mores of the 1960s dramatically misses the mark.”

A few Catholics have expressed doubt that Benedict wrote the letter or that he was its sole author. However, Archbishop Georg Gänswein, secretary to the Pope Emeritus, was reported by The New York Times as having said the essay was Benedict’s own work.