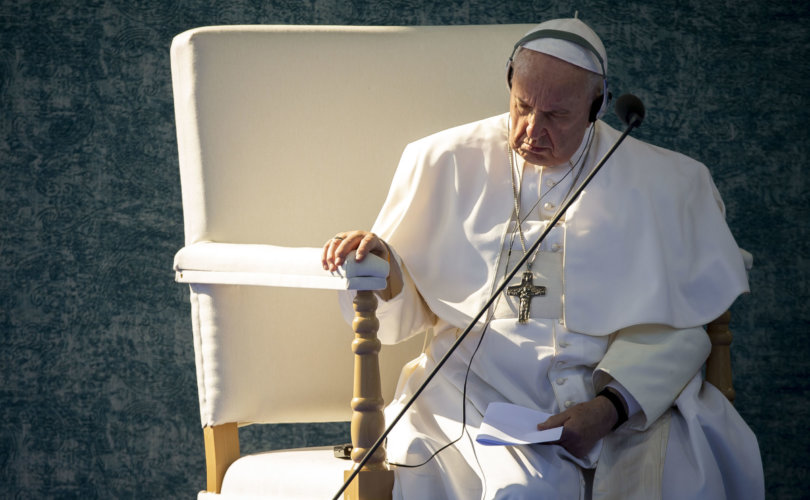 BRATISLAVA, Slovakia (LifeSiteNews) — Pope Francis said Monday that Catholics should stay clear of a ‘rigid’ and ‘defensive’ Catholicism, and embrace instead a ‘creativity of the Gospel’ that does not ‘judge and blame the bad world.’

At St. Martin’s cathedral in Bratislava, Slovakia, Francis outlined his views on the secularization of modern society, especially in Europe, and how he thinks the Church should operate going forward.

“Isn’t this perhaps the most urgent task facing the Church before the peoples of Europe: finding new ‘alphabets’ to proclaim the faith?” the Pope asked. “We are heirs to a rich Christian tradition, yet for many people today, that tradition is a relic from the past; it no longer speaks to them or affects the way they live their lives.”

In 2019, the Priestly Fraternity of St. Peter (FSSP), a society of priests dedicated to offering the Traditional Latin Mass across the world, said, “Newer apostolates have seen dramatic growth,” with “some doubling their numbers over the last year, such as Los Angeles, which went from 250 per Sunday to 500.”

“A plethora of young families are coming, attracted by the sacred beauty and reverence of the Mass, the traditional catechesis and true parish family life,” said Fr. Jonathan Romanoski, an FSSP pastor in Florida.

In 1955, the Traditional Latin Mass was still the Mass being offered at most parishes in America, and Archbishop Carlo Maria Viganò argued that it was the 1969 implementation of the liturgical reform of the Mass that caused “the spirit of rupture” in the Church that is responsible for the decline.

Francis released his motu proprio Traditionis Custodes on July 16, restricting many priests’ ability to offer the Traditional Mass, in what Fr. Martin Grichting called “draconian” and “a sign of weakness.”

“This legal decree [Traditionis Custodes] is an expression of fear, the fear that in free circumstances a form of liturgy [the traditional Liturgy] could be preserved and even expanded in the younger generation,” wrote Grichting. “The legal text is at the same time the admission that the liturgy created after Vatican Council II has apparently not sufficiently reached the hearts of the faithful, so that many and more and more want to return to a form that is not only intellectualistic, but also gives a spiritual home to the reasons of the heart of which reason knows nothing.”

Continuing his Monday address, Francis yet again insisted that tradition is not the answer to the secularization of society, but instead a “creativity of the Gospel” which can help the Church regain influence.

Francis encouraged “freedom” from an “oppressive” Gospel, and said, “I encourage you to help set them [fellow Catholics] free from a rigid religiosity. May they be freed from this, and may they continue to grow in freedom.”

Neither Monday’s address nor Tradititionis Custodes are the first instances of Pope Francis going after those who adhere to the traditions of the faith. On June 10, Francis slammed traditionally minded faithful and seminarians as “rigid” and claimed their strictness in matters of faith was a sign of a “lack of humanity.”

Again, at a general audience on August 18, Francis, when asking rhetorically if he believes the Ten Commandments are absolutes, stated, “No. I observe them, but not as absolutes, because I know that what justifies me is Jesus Christ.”

This comment caused an uproar in the Catholic world. Bishop Athanasius Schneider said Francis’ statement “contradicts the teaching of the Church and is very much a kind of sola fide teaching of Martin Luther.”