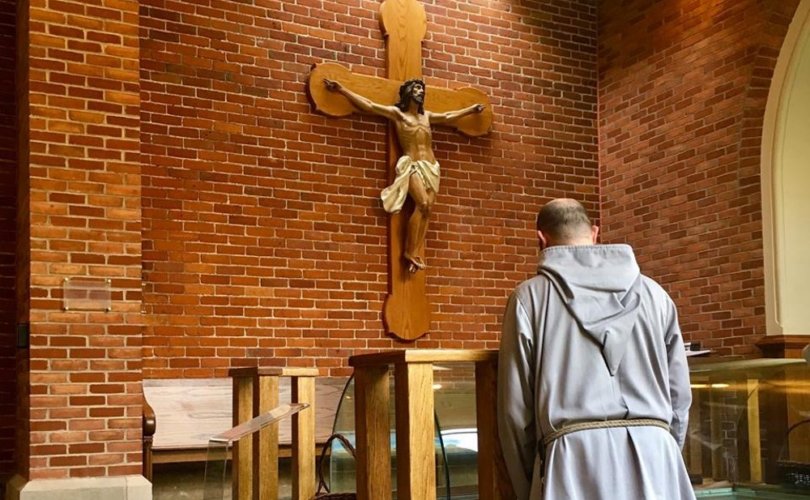 September 6, 2018 (LifeSiteNews) – On Wednesday, the Franciscan Friars of the Renewal sent the current U.S. apostolic nuncio, Archbishop Christophe Pierre, a letter backing “an investigation by the Holy See into the specific allegations contained in the testimony of Archbishop Carlo Viganò.”

That testimony implicated Pope Francis and a number of high-ranking Vatican cardinals and bishops in covering up ex-Cardinal Theodore McCarrick’s sexual predation.

The Franciscan Friars of the Renewal (CFRs) were founded by Father Benedict Groeschel, who is famous for his many writings on the human person and psychology as well as his pro-life activism. The order serves the poor and performs other spiritual and corporal works of mercy.

“By living in poor neighborhoods, running homeless shelters, soup kitchens, and youth programs, friars strive to fulfill the command of the gospel and our Holy Father St. Francis to live among the poor, providing for their physical and spiritual needs,” the CFRs explain on their website.

The friars wrote to Archbishop Pierre in a “spirit of obedience and respect” and reaffirmed their “filial obedience and our love for the office and person of the Supreme Pontiff.”

“Sadly, we find ourselves in the midst of a grave crisis in the Church caused by the sins of both priests and bishops,” the CFRs wrote. “These sins and crimes deeply wound the Heart of Christ and disfigure the face of His bride, the Church. The first step towards purification and healing is the revelation of the full truth of what happened. Only then can judgement be passed by competent civil and canonical authorities, offenders be punished and removed, victims compensated, scandal repaired, and justice restored.”

“Therefore, we join our voices to all those who are calling for an investigation by the Holy See into the specific allegations contained in the testimony of Archbishop Carlo Maria Viganò,” the friars continued. “In particular, we echo the worlds of Cardinal Daniel DiNardo: ‘The questions raised deserve answers that are conclusive and based on evidence. Without those answers, innocent men may be tainted by false accusation and the guilty may be left to repeat sins of the past.”

They promised to pray for Pope Francis, as this investigation is “solely [his] responsibility.”

Without such an investigation and “true reform and renewal,” the Church is “severely hampered” in evangelization.

“How can we persuasively invite others into the Communion of Christ’s church while this abominable cloud of suspicion and moral corruption hovers over her?” they asked. “How can we point to the firmness of the Rock on which Christ built His Church when even the Pope and his closest collaborators remain under this noxious cloud?”

In order for “this cloud” to be lifted, “each and every allegation raised in Archbishop Viganò’s testimony needs to be either corroborated publicly with evidence or disproven,” they wrote. Additionally, priests and bishops must “reaffirm publicly an unequivocal commitment to observe faithfully the moral teachings of the Catholic Church, especially in the area of human sexuality.” Quoting a 2005 document from the Congregation for Catholic Education, the CFRs also said that those who “practice homosexuality, present deep-seated homosexual tendencies or support the so-called ‘gay culture’” must not be admitted to seminaries.

The CFRs’ letter is signed by Father John Paul Ouelette, the order’s General Servant, and Father Fidelis Moscinski, the order’s General Procurator. Fr. Fidelis is known to many in the pro-life movement for his participation in the peaceful Red Rose Rescues, an effort the CFRs support.

Read the Franciscan Friars of the Renewal's full letter to the nuncio here.