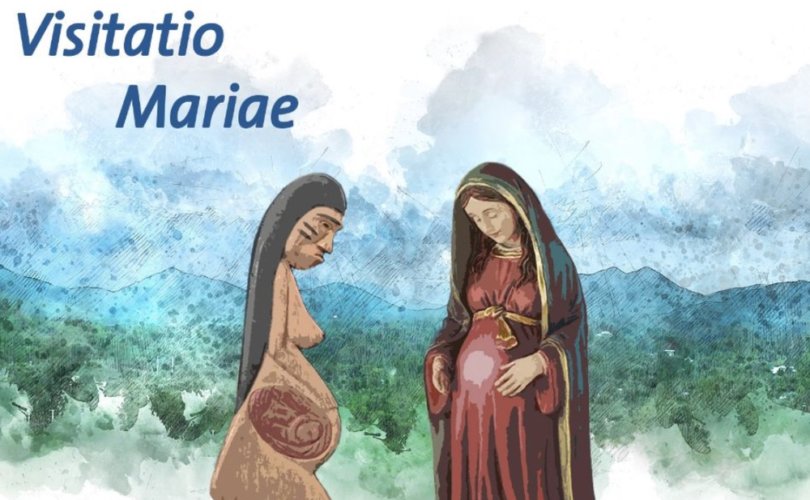 In an email to a concerned Catholic obtained by LifeSiteNews, FI executive director Fr. Markus Heinze OFM defended doing so.

“Regarding your accusation of the message of the Christmas Card, I don’t want to go into details, I just don’t understand why it you see it as a sacrilege to bring Mary together with the pagan symbol for mother earth while we are all used to put a donkey next to the newborn Jesus,” he wrote. “The donkey is the symbol for the pagans. And we do this because we believe that God came into our world in Jesus to meet all people including the pagans.”

“So the sacrilege is not to meet pagans, the sacrilege is when we don’t meet them with respect as Christianity did in the past when they killed hundreds of thousands of indigenes and destroyed their land and culture,” Heinze concluded.

In the context of the nativity, Luke tells us about the meeting between Mary and her cousin Elizabeth. The two women, both expecting a child, meet each other with attentiveness and sensitivity. At the opening of the Synod, Pope Francis asked us to approach the peoples of the Amazon on our ‘tiptoes’.

In this picture you see Mary, who we honor as the ‘new Eve’ or Mother of Life, together with Pachamama, who some indigenous peoples honor as the ‘earth mother’. Francis of Assisi too describes the earth as our mother in the Canticle.

Pachamama, a nude, red-wombed pregnant Amazonian woman, faces the Virgin Mary in the image FI used atop its email greeting.

The greeting concluded: “Celebrating Christmas, I wish that we may approach God and each other on our ‘tiptoes’ so that we experience in these meetings the ‘real living’.”

Pope Francis blessed a Pachamama statue at an October 4 tree-planting ritual in the Vatican gardens kicking off the Amazon Synod. Several Pachamama statues were then displayed inside Santa Maria in Traspontina church near the Vatican. This prompted 26-year-old Austrian Alexander Tschugguel to remove them and toss them in the Tiber River.

They were allegedly recovered. Pope Francis later issued a statement in which he apologized as “Bishop of Rome” for the removal of the “statues of the Pachamama” from the church. He claimed that they were there “without idolatrous intentions.”

Franciscans International says on its website that it enjoys consultative status at the United Nations as a “non-profit, international non-governmental human rights organisation” to “promote and protect human rights and environmental justice.”

Its social media posts indicate it is currently engaged in a campaign against ritual infanticide in the West African country of Benin.