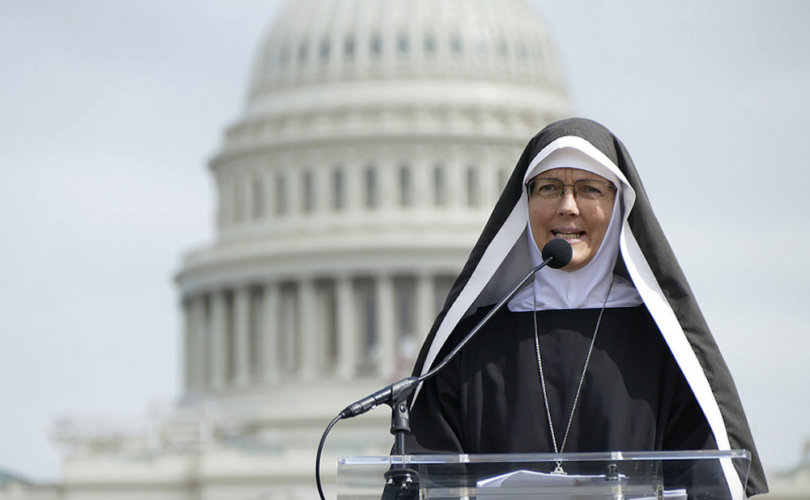 WASHINGTON, D.C., October 17, 2016 (LifeSiteNews) — Catholics are “fully within their rights” to speak up if clergy are contradicting the faith, a marathon-running religious sister told LifeSiteNews in an exclusive video interview.

“Things are laid out very clearly, not only in Scripture, but also in the Catechism, a beautiful book that lays out everything so beautifully,” the Diocese of Steubenville, Ohio’s Sister Mary Brigid Callan told LifeSiteNews. “We always do everything with love, but sometimes love is hard. We can’t treat people with a false mercy or a kind of a false admiration.”

Callan gained extensive business experience before becoming a Franciscan sister and now leads the Diocese of Steubenville’s development and stewardship office. She is also an avid runner and athlete.

She explained, “Bishops and priests and sisters are humans and they make mistakes … most of the time out of the desire to do something pastoral or loving.” But “it’s never loving to water down the truth,” she said. Truth, love, and mercy are “not mutually exclusive things.”

Callan, one of the people who led hundreds in praying the rosary outside of the U.S. Capitol on October 7, the Feast Day of Our Lady of the Rosary, said Catholics must not retreat from the culture just because it has become bleak.

Callan listed lack of prayer, the absence of fathers, and contraception as major threats the family faces today.

“People underestimate the tremendous fracturing of the family fabric [and] the fracturing of the love between a husband and a wife that contraception introduces,” she said. It’s one of the “biggest horrors” we’re facing because when procreation is removed from sex, “then the fabric of society, of humanity itself is gone.”

Callan implored people of good will to “pray and fast for our country” even though it’s “easy to underestimate the power of prayer and fasting.” The “small discomfort” of praying and fasting united to Christ’s sacrifice on the cross is “infinitely worthwhile,” Callan said.

According to Callan, today’s young Catholics “are called to be heroic.”

“It’s a beautiful, noble, incredible thing to be holy and to follow in Christ’s footsteps. It’s countercultural,” she said.