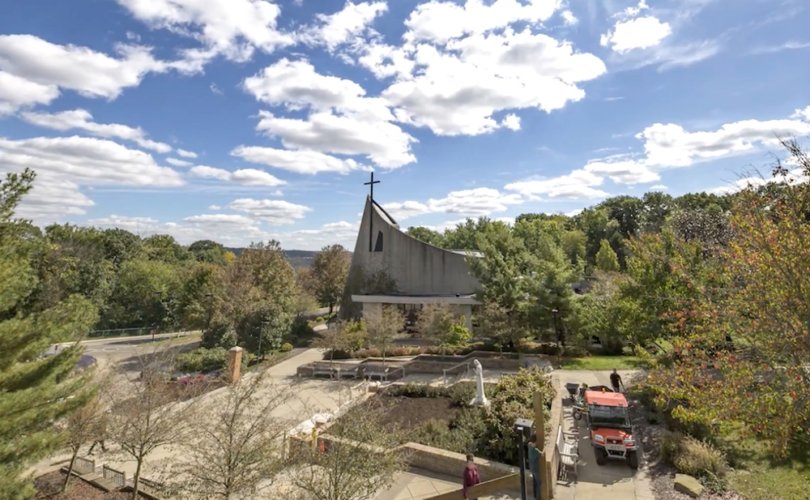 STEUBENVILLE, January 11, 2019 (LifeSiteNews) – Franciscan University of Steubenville (FUS) has apologized for asking students to read a pornographic novel that blasphemously depicted the Virgin Mary and Jesus. The letter came after the university had at first defended the novel on academic grounds.

University president Father Sean Sheridan wrote in the letter that he was unaware that English professor Stephen Lewis had assigned The Kingdom by French atheist Emmanuel Carrère. Sheridan wrote that the blasphemous book “is not currently and will never again be assigned” for students at the university. Prof. Lewis is the chairman of the English literature department at FUS.

In an earlier email to Church Militant, university spokesman Tom Sofio defended FUS by writing that it arms students with the “knowledge and wisdom to confront the challenges of a coarse modern culture.” This comes with studying ancient and medieval writers, and also the moderns, wrote Sofio. “Where would we be,” he wrote, if Catholics are not able to push back against books like The DaVinci Code and dangerous heresies and heterodoxies. The university, he wrote, stands firm in “providing the integration of faith and reason that will give them the best chance at lifelong success.”

The Kingdom: A Novel has sold hundreds of thousands of copies in French, and has been heralded by secularists in the U.S. and UK as a great work of literature. Author Carrère seeks to explain his own life through pornographic images and fantasies set in the first one hundred years after Christ that involve even the Virgin Mary.

Fr. Sheridan wrote that Lewis had selected The Kingdom in an elective class for upperclassmen to “contrast how Catholics and non-Catholics approach faith in literature” and to prepare them for exchanges with secularists. While defending Lewis, Sheridan said that the book is “so directly pornographic and blasphemous” that it should not be on a Catholic campus. “I have directed our chief academic officer,” he wrote, and the Faculty Standards Committee, “to immediately review and revise our existing policy on academic freedom to prevent future use of scandalous materials.” Sheridan did not mention any sanctions to be imposed on Lewis, who chairs the department of English.

Well-known FUS theologian and author Scott Hahn commented on Facebook that he was thankful for Father Sheridan’s “heartfelt” response and that “first and foremost” it included an apology to Jesus and the Virgin Mary. This came after an earlier Facebook message to Janness Abraham, obtained by Church Militant, in which Hahn wrote that academic freedom “should not be exercised in a vacuum” but must serve the truth rather than “serve as a license for perversity and sacrilege. Assigning this book was irresponsible and imprudent. Defending it is unwise and wrongheaded. Please pray for our university.”

In an extensive interview with LifeSiteNews, Hahn repeated his request for prayers for the university he has served for nearly 30 years. The noted scholar and author, who travels widely to Catholic conferences, said that while he respects Professor Lewis as a colleague, he disagrees “vehemently” with the assignment of the controversial book by Carrère. Hahn, like the other faculty members contacted by LifeSiteNews, was not aware of any academic sanctions that might be imposed on Lewis as a result of the controversy. Hahn noted that his theology colleague, John Bergsma, is on the Faculty Standards Committee to review the university’s academic freedom policy.

According to a faculty member contacted by LifeSiteNews, it was a “gut punch” to learn that Lewis assigned The Kingdom. The professor, who wished to remain anonymous, said that colleagues would like to know why Lewis exposed students to such “vile, treacherous” literature. Professors at a Catholic university, the professor said, should be feeding “bread, not stones” to students, in a Biblical reference. Upperclassmen in the literature department might be better off with exposure to Dante or modern Catholic writers, rather than questionable literature that advances the LGBTQ agenda, suggested the professors.

Having expressed satisfaction with Father Sheridan’s apology, FUS theology professor John Bergsma wrote that the “vast majority” of his colleagues would find Carrere’s book “abhorrent” and that Lewis “probably also considers it abhorrent.” In his Facebook post, Bergsma theorizes that Lewis may have assigned the book as a “representative of some of the debased literature that has become fashionable in Europe” to which students should be exposed in order to know what is “really going on in the world of literature.” However, Bergsma wrote, “I do not think it necessary to expose students to obscenity, pornography, and blasphemy.” Citing the letter of St. Paul to the Ephesians, Bergsma notes “‘It is shameful even to mention what the disobedient do in secret.’”

This is not the first time a Franciscan University faculty member has come under the spotlight. “Pro-life feminist” Rebecca Bratten Weiss, co-founder of the New Pro-Life Movement (NPLM), was the subject of a 2017 LifeSiteNews report for her “outspoken radical feminist” positions. Weiss taught for several years at the university in its Department of English and, as LifeSiteNews reported, had “close ties to Steubenville English Department chair Stephen E. Lewis.”

Some FUS faculty members worry about the direction the university is taking through such hires. For example, Professor Timothy Williams wrote in an October Facebook post noted by Church Militant that “excellent and faithful” professors have been denied tenure recently, while writers for the university’s Veritas Center have been “attacked publicly” and left undefended “on orders of the administration.” He wrote that FUS is “not a university” he would recommend for employment.

At The Remnant website, Williams wrote that he is concerned about the “erosion of free speech” at FUS and the reprimands meted out by administrators for faculty who criticize Pope Francis. “Several of us on the faculty who have been critical of Pope Francis – imagine that!” he wrote, “have been reprimanded by the administration, to one degree or another.”

I would like to apologize for the use of Emmanuel Carrere's book, The Kingdom, in an advanced literature course at Franciscan University last spring. Above all, I would like to apologize to Our Blessed Mother and Her Son, and to anyone who has been scandalized because of this incident. While I believe the professor's intention in using this book in his class was not malicious, the book is scandalous and extremely offensive. I assure that I was unaware that the book was being used at the time and that The Kingdom is not currently and will never again be assigned reading in any class at Franciscan University of Steubenville.

The professor selected The Kingdom for use in one elective class with five upperclassmen as a tool to contrast how Catholics and non-Catholics approach faith in literature and to prepare the students for challenging conversations with people think like Carrere. Again, the professor did not intend to scandalize, but The Kingdom is so directly pornographic and blasphemous that it has not place on a Catholic university campus. I regret that the University's earlier statement did not make this clear.

A Catholic education should prepare students to stand for the truth of the Catholic faith and to do battle against the blasphemy and heresy rife in our culture today. To do so, they must be equipped with a firm knowledge of Catholic Church teaching as well as a thorough understanding of the views and philosophies of their opponents. Professors must weigh the benefits and risks of exposing their students to the works of those who oppose the Church. They must walk the fine line between underpreparing their students for the might tasks ahead and overexposing them to material that may cause them spiritual harm.

Preparing students to confront challenges to their faith is certainly an important part of the education and formation we strive to provide. This approach has marvelously prepared thousands of Franciscan University students to fight for their faith in the media, the arts, the political and business arenas, the sciences – indeed, to evangelize every facet of our culture. But Franciscan University annot, and will not, jeopardize our students' moral and spiritual development in doing so.

I have directed our chief academic officer, Dr. Daniel Kempton, and our Faculty Standards Committee to immediately review and revise our existing policy on academic freedom to prevent future use of scandalous materials.

I ask your prayers for Franciscan University of Steubenville. By God's grace, forgiveness, and the loving intercession of our beloved Blessed Mother Mary, we will ever more faithfully carry out our mission and help our students succeed spiritually, morally, and intellectually.

In Christ and St. Francis,