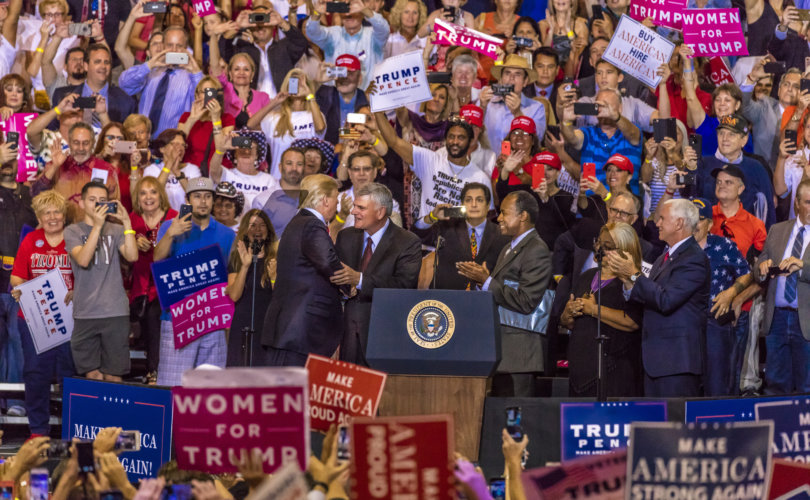 WASHINGTON, D.C., December 22, 2020 (LifeSiteNews) – Christian evangelist Franklin Graham posted a message Saturday saying he believes President Donald Trump’s claims of a rigged election and that Trump has “a track record of being right.”

Graham, who is president of Samaritan’s Purse charity and a key ally of Trump, posted a message to his Facebook account in which he described his reason for believing the presidential election was rigged. The minister alluded to some of Trump’s previous, sensational statements that were initially dismissed by the media or politicians but later turned out to be true.

In 2016 Donald J. Trump told the American people that the government was spying on him. The media said that he was…

“In 2016, Donald J. Trump told the American people that the government was spying on him. The media said that he was paranoid. The Obama administration and the Democrats said that this was an absolute lie and that Donald Trump was not fit to be president, only for us to find out later that the U.S. government did spy on Donald Trump, and what he had said was in fact true,” Graham said.

Graham then turned his attention to the recent election, saying in light of these past events, he believes the president, who has a “track record of being right.”

“Then the Democrats impeached him over a phone call. The President has been maligned, falsely accused, and attacked on every front since before the election in 2016. When President Trump says that this election has been rigged or stolen, I tend to believe him.

He has a track record of being right. Pray for President Trump, pray for Joe Biden, and pray for our nation — that we will get through this, and for God’s will be done.”

Just a few days before, Graham posted another message in support of Trump, outlining the president's many accomplishments, saying he was “grateful to God” for Trump. In fact, Graham continued by stating that “President Trump will go down in history as one of the great presidents of our nation, bringing peace and prosperity to millions here in the U.S. and around the world.”

Trump has been challenging the apparent results of the 2020 election, with his legal team filing multiple cases of voter fraud. Writing for LifeSite yesterday, Steven Mosher noted how “not only is the weight of evidence simply overwhelming, but also that it continues to grow day by day.” “American democracy is terminally ill with Stage 4 voter fraud from which it may never recover,” Mosher added.

Despite the Supreme Court refusing to hear Texas’ lawsuit regarding an unconstitutional election, Trump’s legal challenges continue. While the electoral college votes went in a majority to Biden, alternate Republican electors voted for the president, thus enabling him to continue his challenges through December and into the new year.