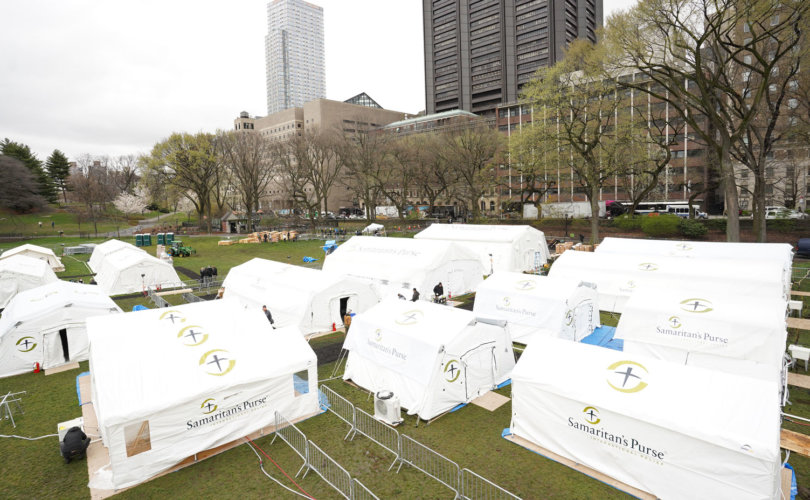 NEW YORK, April 16, 2020 (LifeSiteNews) ― LGBT activists are continuing to venture out into Central Park to protest the presence of an emergency hospital responding to the COVID-19 pandemic.

According to NBC, on Tuesday a group called “Reclaim Pride Coalition” was seen “several yards” from the tent hospital in Central Park. The hospital is owned and staffed by the Evangelical Christian disaster relief organization Samaritan’s Purse.

The activists expressed their hatred for the organization through signs reading “Help not hate.” They blamed various public leaders, including NYC Mayor Bill de Blasio, Gov. Andrew Cuomo, and the administration of Sinai Hospital for allowing the Christian organization to set up its 68-bed infectious disease hospital in New York.

The issue for the LGBT activists continues to be the organization’s scriptural beliefs about marriage. The staff and volunteers of Samaritan’s Purse sign its statement of faith, which includes the following passage:

We believe God’s plan for human sexuality is to be expressed only within the context of marriage, that God created man and woman as unique biological persons made to complete each other. God instituted monogamous marriage between male and female as the foundation of the family and the basic structure of human society. For this reason, we believe that marriage is exclusively the union of one genetic male and one genetic female. Genesis 2:24; Matthew 19:5-6; Mark 10:6-9; Romans 1:26-27; 1 Corinthians 6:9.

The organization is also pro-life, stating that “human life is sacred from conception to its natural end.” Founded by Reverend Bob Pierce in 1970, the disaster relief foundation has offered supplies and medical help to communities suffering from natural disasters for 50 years.

Activist Jay W. Walker of the Reclaim Pride Coalition asked, “How was this group ever considered to bring their hatred and their vitriol into our city at a time of crisis when our people are fighting a pandemic?”

On Tuesday, Reverend Franklin Graham, son of the late Billy Graham and the CEO of Samaritan’s Purse, released a statement regarding political opposition to the presence of the Central Park field hospital.

“We have watched daily press briefings by Governor Cuomo and others pleading for help and on April 1, in partnership with Mount Sinai Health System and in response to urgent calls for hospital beds, medical equipment and staff, Samaritan’s Purse erected a 14-tent, 68-bed emergency field hospital in Central Park, staffed by a team of more than 70 doctors, nurses and other medical personnel and relief specialists,” Graham wrote.

“This respiratory care unit, which includes 10 ICU beds equipped with ventilators, has admitted 119 patients during our first two weeks of operation,” he continued.

“While so many have expressed their appreciation and support, sadly some New York officials and a special interest group have expressed concerns or outright opposition to the presence of Samaritan’s Purse and our field hospital in Central Park.”

“These groups share a common objection to the Statement of Faith which Samaritan’s Purse requires its employees to sign and generally asks its volunteers to support,” he noted.

“While our Scriptural belief in marriage between a man and a woman seems particularly offensive to representatives of these three groups, we don’t believe this is the time or place to wage this debate,” he asserted.

“Samaritan’s Purse is a decidedly Christian private relief organization, funded almost entirely by individuals around the world who share our passion for providing aid to victims of war, disease, disaster, poverty, famine and persecution — and doing so in Jesus’ Name. It seems tone-deaf to be attacking our religious conviction about marriage at the very moment thousands of New Yorkers are fighting for their lives and dozens of Samaritan’s Purse workers are placing their lives at risk to provide critical medical care.”

Graham said the organization has never asked the “millions of people we have served” to subscribe to its beliefs.

“In other words, as a religious charity, while we lawfully hire staff who share our Christian beliefs, we do not discriminate in who we serve,” he said.

“We have provided billions of dollars of medical care and supplies, food and water, and emergency shelter without any conditions whatsoever. Our Christian faith compels us — like the biblical Good Samaritan — to love and serve everyone in need, regardless of their faith or background.”

Graham said he and the Samaritan’s Purse organization object to being harrassed because it has interfered with its ability to help patients.

“In a country that cherishes freedom of speech and religion, we don’t object to opposition or criticism of our beliefs as a Christian organization,” he said.

“What we do object to is being harassed into diverting precious resources of time and energy and personnel away from serving COVID-19 patients in New York City in order to respond to demands for documents and other information from eight Democratic members of Congress, the Human Rights Commission and the Reclaim Pride Coalition — all while the death toll in New York continues to climb.” he continued.

“If any of these groups had funded and erected their own emergency field hospitals to serve COVID-19 patients in Central Park, we would join what we believe would be most New Yorkers — and Americans — in applauding and praying for them, not harassing them.”

Author Rod Dreher wrote in American Conservative magazine that he didn’t understand the LGBT opposition to the charity hospital.

“Can you imagine hating religious people so much that you would rather see people suffer and possibly even die rather than allow religious doctors to treat them? That’s how it is with these New York City progressives,” Dreher said.