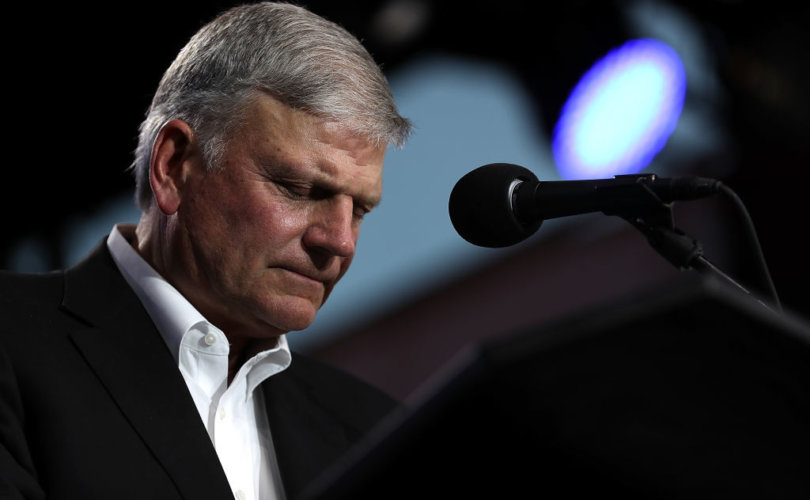 Rev. Franklin Graham at a "Decision America" tour at the Stanislaus County Fairgrounds on May 29, 2018 in Turlock, California.Justin Sullivan/Getty Images

July 15, 2019 (LifeSiteNews) – Evangelical leader Rev. Franklin Graham is speaking out against one of the LGBT lobby’s top congressional priorities, warning that the so-called Equality Act would have “catastrophic consequences” for both religious freedom and women’s rights if it became law.

In May, the Democrat-controlled House of Representatives voted to pass the bill, which Graham warns could become law depending on the outcome of next year’s elections, WND reports.

“If the Senate majority changes or if enough Republican senators change their position, it would be up to the president to veto the bill. And if that office were to change hands in 2020, I have little doubt this would become the law of the land,” Graham wrote in the July-August issue of the Billy Graham Evangelistic Association magazine Decision.

If that happens, he continued, Christian employers “would lose all protections to hire people who adhere to their biblical statements of faith. Christians will be persecuted for their sincerely held beliefs as never before. The clear teachings of the Bible on the sins of homosexuality and abortion will no doubt be considered ‘hate speech.’ It will be a nightmare from which this nation may never recover.”

Conservatives have long warned that the legislation’s true purpose is not to protect homosexual or gender-confused Americans from tangible harm, but to force other Americans such as photographers, florists, and bakers to participate in same-sex “weddings”; to force employers and businesses to accommodate cross-dressing, same-sex cohabitation, and sex-change treatments regardless of their own values or policies; and to force women and girls to sleep, shower, and use the bathroom alongside gender-confused males.

WND adds that in the same issue, the Graham association’s Jerry Pierce warned that the Equality Act “would make no exemptions for religious institutions and explicitly invalidates the federal Religious Freedom Restoration Act,” leading to the closure of adoption agencies that insist children be placed in homes with a mother and a father along with stripping “parents of their right to raise and educate their own children if their beliefs contradict government mandates.”

“The Act’s unsound definitions of ‘sex’ and ’gender identity’ would erase women’s distinct, hard-won recognition in federal laws. Its sex-based nondiscrimination terms would end women’s shelters and many single-sex schools. It would close faith-based foster care and adoption agencies that honor children’s rights to a mother and father. The bill would even act as an abortion mandate,” the bishops added.