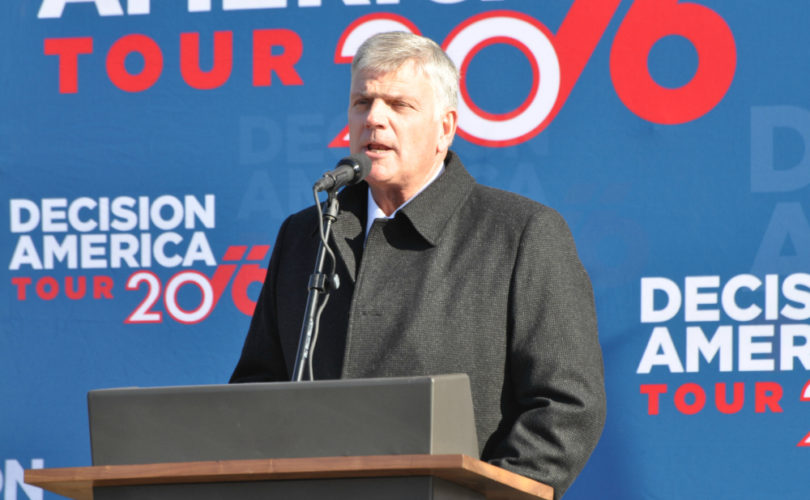 SAN FRANCISCO, California, October 24, 2019 (LifeSiteNews) – Evangelical leader Rev. Franklin Graham spoke out Tuesday against San Francisco leaders over their ban on city employees traveling to states that ban late-term abortion, suggesting that the far-left government is attempting to browbeat states away from recognizing the truth of abortion.

San Francisco Mayor London Breed called the move a stand “against states that put women’s health at risk and that are actively working to limit reproductive freedoms,” and said that while “tax revenue from San Francisco alone may not be sufficient to encourage states to rethink their laws, if other cities and states follow San Francisco’s lead, the financial pressure might be enough to prompt policy changes.”

Graham, who is president of the international charity Samaritan’s Purse and the Billy Graham Evangelistic Association, responded to the policy and Breed’s comments in a Facebook post.

“Progressive socialist leaders like Mayor Breed want everyone to swallow the lie that abortion is a woman’s right—even something to celebrate,” he wrote. “But it’s not. Abortion is murdering a child in its mother’s womb.”

Graham then invoked Isaiah 5:20, “Woe unto them that call evil good, and good evil,” and gave thanks to God “for the many states and individuals across this great land that are standing for life.”

This is not the first time the city of San Francisco has used blacklists to express scorn for the more conservative values of other states. In 2016, it banned both public employee travel to and city contracts with businesses in “states that adopt anti-LGBT laws,” specifically measures to ensure private entities’ right to reserve gender-specific restrooms to actual members of the same sex.