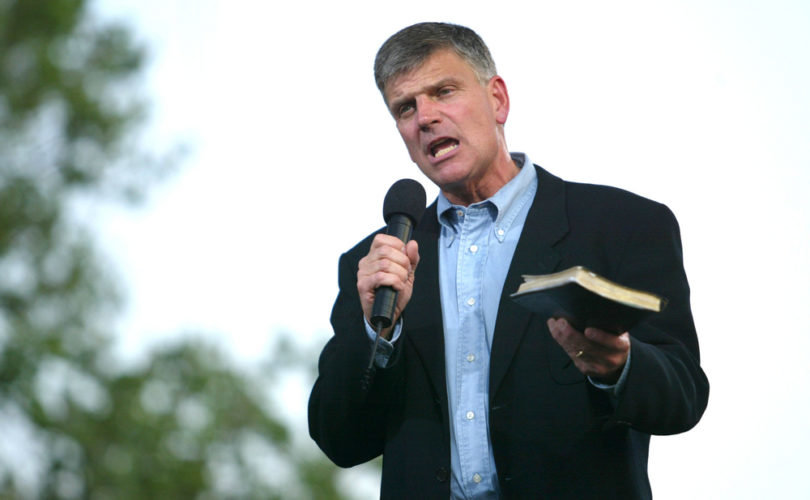 The son of Christian evangelist Billy Graham has said that America is following in the steps of Europe in accepting the culture of death more each day, and that this results from denying Christ.

“I don’t think there’s any doubt that this rise in the culture of death in our own country coincides with the embrace of an immoral, sinful, godless worldview that rejects Christ,” said Rev. Franklin Graham in a report by CNSNews.com. He cautioned as well on the rising threat to freedom of speech and religion.

“Christianity is constantly under siege from the halls of government and education,” he continued, “which seek to suppress any public expressions of faith.”

Euthanasia is embedded in Europe and it’s no surprise, said the head of the Billy Graham Evangelical Association (BGEA), attributing this to the decline of Christianity and broadening secularism and materialism on the European continent.

“Earlier this year, Belgium became the first country in the world to allow child euthanasia with no age limit,” he said. “I’m concerned that America is not far behind.”

Rev. Graham called out the façade used by the euthanasia lobby, noting its advancement in the U.S., and he also made a frank condemnation of abortion.

“The euthanasia movement, disguised now as ‘death with dignity,’ is gaining ground in a number of states,” he warned. “And for every 1,000 live births in the United States, 219 pregnancies end with a murdered child, through abortion.”

Rev. Graham pointed out the infatuation of Hollywood and society with blood and gore, noting how this has begun to supplant earlier national pastimes.

For instance, he said, 17 million people took a pass on the October 12 Sunday Night Football broadcast, traditionally an American mainstay, to catch the season premiere of the zombie television series The Walking Dead, with another 15 million choosing the show again a few weeks later.

“That program is just one of numerous television programs that have garnered tremendous followings by fixating on gore and death,” Rev. Graham pointed out, and said at least half a dozen primetime programs are focused on the same. These shows and similar popular video games display how gripped by death the culture has become.

In all of the death entertainment out there the reality of death is absent, the preacher said, offering a sobering reminder.

“The Bible says that once a person dies, he will face the judgment of God,” Rev. Graham advised. “There is no reincarnation. There is no second chance.”

He minced no words about the reality of eternity, and drew the distinction ignored by Hollywood.

“Death is serious, eternal business,” he said. “Once our physical hearts beat for the last time, we will instantly find ourselves either in the presence of the Lord Jesus Christ in all His splendor, or in the pit of Hell away from His presence.”

“Death is not a fictional television series,” Reverend Graham persisted.  “It is not a popular gaming topic. It is the entryway into either eternal life or eternal death. And a culture that treats it as mere fantasy and amusing entertainment does so at its peril.”

Bold, biblical Christianity is the only antidote to the devilish, dark culture of sin and death that seeks to enslave and ultimately damn people for eternity, the reverend stated in his message, also found in the January edition of Decision Magazine.

He also said we must never cease to preach, teach and live the truth of the Gospel, and that Jesus Christ is the remedy for death.

“Wherever Christianity flourishes, there is a vibrant culture of life, not death,” said Franklin Graham. “When the precepts of the Christian faith are faithfully taught and followed, there is an abundance of selfless, sacrificial living and giving.”