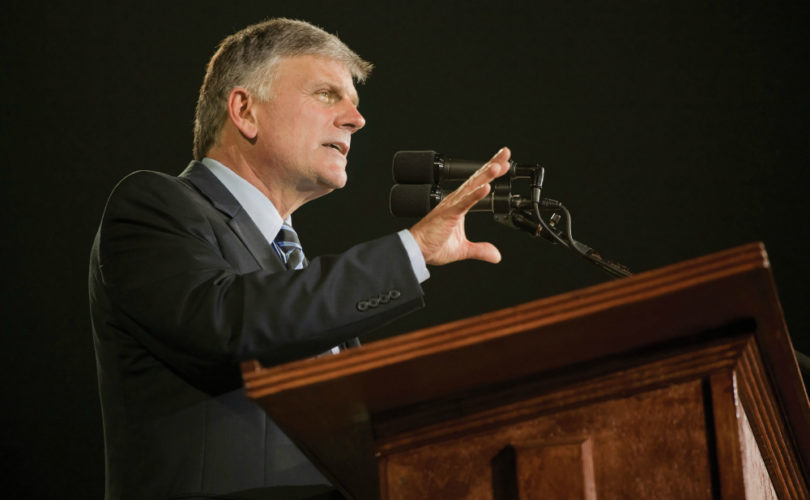 BOONE, North Carolina, December 22, 2015 (LifeSiteNews) – The Reverend Franklin Graham says the Republican leadership’s part in last week’s passage of a $1.1 trillion spending bill that continues to fully fund Planned Parenthood is an example of why he has renounced the party.

“Shame on the Republicans and the Democrats for passing such a wasteful spending bill last week,” Graham posted on his Facebook page yesterday. “And to top it off, funding Planned Parenthood!”

Graham minced no words in denouncing Washington for failing to act in halting government funding of the abortion behemoth, despite revelations of the abortion giant’s involvement in trafficking of human remains.

While a major liberal publication called the bill a big win for Planned Parenthood, Graham said, he was calling it “a big loss for America.”

“After all of the appalling facts revealed this year about Planned Parenthood, our representatives in Washington had a chance to put a stop to this, but they didn’t,” he wrote.

“There’s no question—taxpayers should not be paying for abortions!” Graham exclaimed. “Abortion is murder in God’s eyes. Seeing and hearing Planned Parenthood talk nonchalantly about selling baby parts from aborted fetuses with utter disregard for human life is reminiscent of Joseph Mengele and the Nazi concentration camps!”

The baby body part harvesting scandal should have been all that was needed “to turn off the faucet for their funding,” he said, yet nothing was done to trim the 2,000 page, $1.1 trillion budget.

Republican leaders in Washington dropping the ball with the spending bill was case in point for why he’s left the GOP, Graham stated.

Graham’s staff told LifeSiteNews he had no additional comments to add to his Facebook statements.

Graham, the son of venerable preacher Billy Graham and president for Samaritan's Purse and the Billy Graham Evangelistic Association, has been a strong proponent of protecting the sanctity of human life, as well as resisting the homosexual agenda and religious freedom.

In his December 21 Facebook post he called on people of faith to step up and get involved to make sure biblical values are supported in the U.S.

“Unless more godly men and women get in this process and change this wicked system, our country is in for trouble,” Graham stated. “I want to challenge Christians, even pastors, across the country to pray about running for office where they can have an impact. We need mayors, country commissioners, city council members, school board members who will uphold biblical values.”

Graham has announced a circuit of appearances he’ll be making in all 50 states 2016 to hold prayer rallies, preach, and encourage Christians to vote, live their faith, and pray for the nation.

So far the Decision America Tour 2016 has scheduled stops in some dozen-plus states across the U.S. this winter.