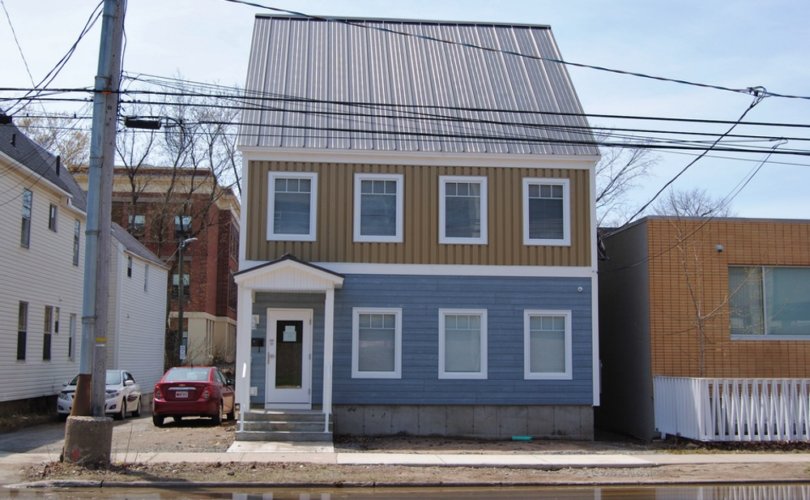 After rising from the ashes left by a fire that destroyed its former home, New Brunswick Right to Life has rebuilt its pro-life Women’s Care Centre at that same location, right next door to abortion provider Clinic 554 (building on right) in Fredericton

FREDERICTON, New Brunswick, July 5, 2018 (LifeSiteNews) – A pro-life group is back in operation next door to a privately-run abortion mill in New Brunswick’s capital city less than two years after a fire gutted its old building.

The blaze started in a third-floor apartment of New Brunswick Right to Life’s Mother and Child House, which also housed its Women’s Care Centre, at 562 Brunswick Street in downtown Fredericton on the last weekend of July, 2016.

Next door to the pro-life organization was the site of the former Morgentaler abortion center. It’s now home to Clinic 554 which performs abortions for $700 to $850, depending on the preborn baby’s gestational age.

New Brunswick’s pro-lifers were disheartened at the loss of their building next door to the abortion center.

“Devastating … Shocking and very saddening,” said New Brunswick Right to Life (NBRTL) president Elizabeth Crouchman about the fire. “We thought, ‘This is the end. What can we do?’”

The destruction of the group’s building was particularly troubling because the organization was then in the middle of a transition. Long-time executive director Peter Ryan was leaving. Heather Hughes, the association’s current top exec, had just taken over the reins.

Office equipment was damaged beyond repair. Files were destroyed by water damage and smoke.

In the wake of the fire, NBRTL moved into a temporary location in downtown Fredericton. It was cramped. The group couldn’t offer all its usual services.

“We couldn’t offer ultrasounds,” said Crouchman. “It meant young women who felt they were pregnant and didn’t know what to do had to go see a doctor.”

Soon it also became clear the fire-gutted three-story house which had been the organization’s base of operations was too damaged and too old to make a renovation feasible.

The group decided that to demolish and rebuild at the old location, next door to the abortion center, was the best option.

On the ground floor, New Brunswick Right to Life’s Women’s Care Centre would – as it had before the fire – offer pregnancy counseling, pregnancy tests, and limited obstetrical ultrasounds. The association’s offices were to be on the second floor.

All of this is allowed under the City of Fredericton’s zoning bylaw.

Still, there was a snag.

In its application for a building permit, NBRTL had also asked the city for two minor variances. The first was to allow its new home to be 1.9 metres lower than the minimum height allowed, two storeys instead of three. The other variance was to go ahead with only as much parking space as is usually allowed in the city’s centre.

With that, the group’s plans went to Fredericton’s planning advisory committee, a public process. The abortion business next door did not approve of the proposal. Abortion supporters accused the pro-life group of harassment, lying, and interfering with the abortion center’s operations. In several emails to the city’s planning department, they insisted NBRTL be denied a permit to rebuild and operate next to Clinic 554.

Fredericton resident and abortion supporter Nicole Smith wrote: “As a volunteer, it was my job to stand outside of the Morgentaler Clinic and to usher our patents past the aggressive harassment of the protestors from the ‘women’s care centre.’”

“I watched people from the centre scream at young women, stick their heads inside open car windows and yell at patients’ children, try to physically block patients’ entrance into the building and lie to patients in order to frighten them out of entering the building,” she added.

Smith also alleged women were lured into the pro-life Women’s Care Centre and shown “horrifying and false images of mutilated infant bodies and … told lies about the risks to their own health if they went through with the abortion procedure.”

But Crouchman countered that pro-lifers have the right of assembly and also the right to their religious beliefs.

“If you’re intimidated by prayer, by someone who does not share your point of view, that’s very sad because that’s freedom of speech,” she said.

The president of the pro-life group said those trying to prevent the Women’s Care Centre from rising from the ashes were well-funded.

“They bring in a great deal of money and we are just a small little group trying to help women,” she said.

Despite resistance from pro-abortion advocates, the City of Fredericton nevertheless approved the pro-life group’s plans.

Today, the Women’s Care Centre is back in operation.

Its new $30,000 ultrasound machine along with other pieces of life-saving equipment will not be operational until the Women’s Care Centre officially opens later this year, likely in October.

Despite this, however, the organization is still offering counseling and pregnancy tests. It is now more accessible for the disabled. There is an elevator. And there’s air-conditioning, something very much appreciated during the July heatwave.

The space is now custom-designed to meet NBRTL’s needs and the needs of every woman seeking help and an alternative to abortion.