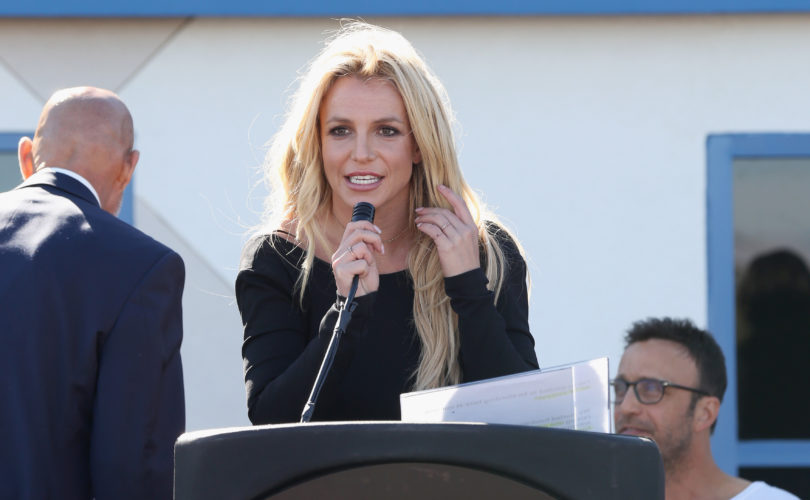 LOS ANGELES, June 24, 2021 (LifeSiteNews) — Britney Spears, one of the most famous and most successful singers in this century, has testified to a court that her guardians are refusing to allow her to marry and have forced her to continue carrying a contraceptive device inside her body.

According to the transcript of yesterday’s hearing in Los Angeles, Spears, 39, stated that the team controlling her conservatorship, which has included her father Jamie since 2008, won’t allow her to get a doctor to remove an intrauterine device.

“I was told right now in the conservatorship, I’m not able to get married and have a baby,” she said to Judge Brenda Penny over the phone. “I have [an IUD] inside of myself right now so I don’t get pregnant.”

“I wanted to take the (IUD) out so I could start trying to have another baby. But this so-called team won’t let me go to the doctor to take it out because they don’t want me to have children — any more children. So basically, this conservatorship is doing me way more harm than good.”

Spears has been in a relationship with fitness model Sam Asghar, 27, since 2016. She has two children, now teenagers, with her ex-husband, performer Kevin Federline. The world-famous pop star had a very public breakdown in 2007, when she and Federline were divorcing, during which Spears shaved her head. Federline successfully sued for custody of their children, and in 2008 Spears was put under the legal guardianship of her father.

Jamie Spears controlled his daughter’s person and her estimated $60 million estate until 2019 when, apparently for health reasons, he gave up conservatorship of his daughter, but not of her property. All decisions concerning Britney Spears herself are now determined by her manager Jodi Montgomery and a court-appointed attorney named Andrew Wallet.

Until yesterday, hearings concerning the conservatorship of Spears and her estate have been closed to the public, but her fans have long questioned her father’s and other guardians’ control.

Spears has maintained a successful career, releasing a bestselling “comeback” album entitled “Circus” and making a guest appearance on the How I Met Your Mother television show in 2008 itself, releasing three more albums, conducting three world tours, holding down a contract in Las Vegas for four years, and making other television appearances. This, observers point out, is not the level of success expected of people who need the oversight of conservators. In her telephoned testimony to Judge Penny, Spears said yesterday that the conservator team has forced her to work when she wanted to take a break, and that she has been made to work seven days a week.

For another, the New York Times recently obtained court documents showing that Spears has wanted to change or end the conservatorship for years. In 2016, she reportedly said that her father was “obsessed” with her, controlled her friendships, her allowance and even her home improvements. In 2019, she complained that she had been forced into a mental home, a charge she repeated in yesterday’s testimony.

“Not only did my family not do a … thing, my dad was all for it,” Spears stated. “Anything that happened to me had to be approved by my dad. And my dad acted like he didn’t know that I was told I had to be tested [for mental illness] over the Christmas holidays before they sent me away, when my kids went to home to Louisiana. He was the one who approved all of it. My whole family did nothing.”

“Over the two-week holiday, a lady came into my home for four hours a day, sat me down and did a psych test on me. It took forever. But I was I was told I had to. Then after, I got a phone call from my dad, basically saying I’d failed the test or whatever, whatever. ‘I’m sorry, Britney, you have to listen to your doctors. They’re planning to send you to a small home in Beverly Hills to do a small rehab program that we’re going to make up for you. You’re going to pay $60,000 a month for this.’ I cried on the phone for an hour and he loved every minute of it.”

Spears also alleged that she had been falsely accused of not taking medicine she had been prescribed. The star was then made to take the potentally dangerous drug lithium, she said.

Last night, actor and left-wing activist Rose McGowan made a surprise appearance on FOX News host Tucker Carlson’s show to publicize Spears’ struggle for freedom. McGowan described how the performer had had to sing for her family’s supper since she was a child and has been forced to do so in adulthood, too.

“Her father put her under a conservatorship at age 25,” McGowan said. “Many in the media laughed and scorned her when she shaved her head. I lived in Hollywood during that time, and I’ve made it my life’s mission to tell all of you out there what so many of you really know deep down: that fame and Hollywood and the media machine are rotten to the core, and they do hurt, and they do damage.”

“At age 25 her father and a judge ruled, with many a paid-off doctor’s help, that Britney Spears had dementia. So, since then she’s gone on to do a five-year residency in Vegas, three shows day. She’s gone on a tour in 2018.”

The controversy has itself brought public attention to the plight of the estimated 1.3 million Americans, most of them elderly, who are under conservatorships. In October 2017, the New Yorker shined a light on the legal kidnappings of wealthy elderly people by court-appointed private guardians. Under the USA’s chaotic guardianship system, “private guardians” can convince courts to give them control of complete strangers, removing them from their homes, alienating them from their children, liquidating their assets, and charging their estates huge fees. As Richard Black of Americans Against Abusive Probate Guardianship told the New Yorker, “The exploitation of seniors is becoming a real cottage industry right now.”

To deal with the shocking violation of the rights of American citizens trapped by the guardianship industry, Republican Reps. Jim Jordan and Matt Gaetz of the House Judicial Committee have asked Rep. Jerry Nadler (D-NY) to hold hearings into the matter. In a letter dated March 8, 2021, Jordan and Gaetz referenced both the Britney Spears case and the Daniel Goss elder abuse case.

“The ACLU is concerned that individuals are being ‘stripped of virtually all of their civil rights through guardianships and conservatorships’ and has called for the exploration of reforms to ensure that unnecessary conservatorships can be terminated so these individuals may direct their own lives,’” they wrote.

“The most striking example is perhaps the case of multi-platinum performing artist Britney Spears … In court appearances in August and November of 2020, Ms. Spears’ attorney represented to the court that Ms. Spears ‘strongly opposed’ having her father as a conservator, that she was afraid of her father, and that she would not again perform publicly so long as this arrangement persisted. Despite these pleas, Mr. Spears remains a conservator of her estate.”

According to media reports, Nadler has not responded to the Republicans’ request.