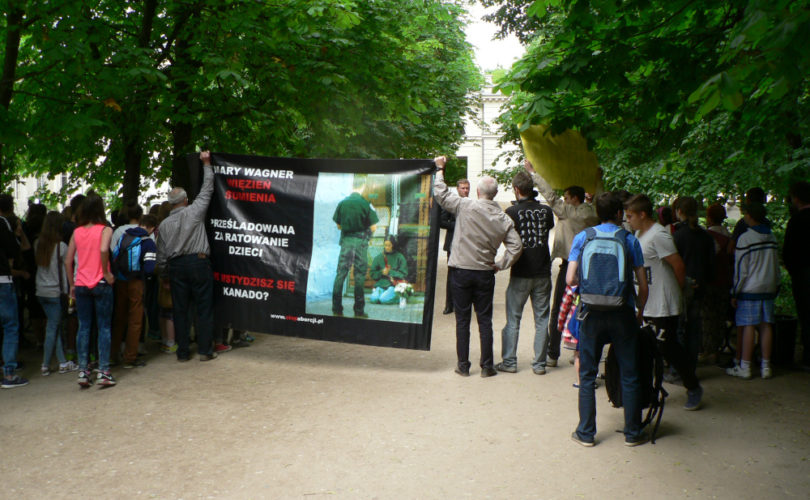 Courtesy of the Right to Life Foundation

On June 9, the Right to Life Foundation (Fundacja Pro- Prawo do życia) organized another picket in front of the Canadian embassy in Warsaw to protest Wagner’s persecution. Wagner is a soft-spoken woman who has been jailed for trying to dissuade women from getting abortions.

For two hours, the activists displayed abortion pictures and criticized Canada’s treatment of the unborn and Wagner. Their slogans included “Canada Against Free Speech,” “Conscience Chained in Canada,” and “No Tolerance for Freedom of Speech in Canada.” A red poster with a communist hammer and sickle served as a reminder of the draconian Soviet abortion policy in force in Canada. Canadian politicians could see them, as well as U.S. Ambassador Stephen Mull.

“Harper likes to talk about democracy and freedoms, and in his country, people are persecuted for their views,” said anti-abortion activist Jacek Kotula.

The activists accompanied Harper, uninvited of course, on his next visit, to Łazienki Park. Here Harper met his Polish counterpart, Ewa Kopacz, to discuss support for Ukraine and strengthening the relations between Poland and Canada.

The Canadian delegation found itself within ten yards of the determined pro-lifers holding a large sign reading, “Mary Wagner, prisoner of conscience, persecuted for saving children.” A large crowd of Canadian politicians, military personnel and members of the media could do nothing but listen to constant chants of “Free Mary Wagner!” Both Canadian journalists and politicians took photos of the pro-lifers, and the journalists asked about Wagner’s plight. Two large school groups on a field trip made the picket much larger than expected.

Kotula told LifeSiteNews that Harper seemed confused by his welcome. “It seemed to me he thought people were greeting him. After a few seconds he realized we were shouting ‘Free Mary Wagner.’” At this point, Harper quickly turned away and walked into the palace where the meeting took place.

Demonstrations in defense of Wagner have been organized once per month since her latest arrest in December 2014.

“During Harper’s term, Linda Gibbons spent years in a Canadian prison for walking on a sidewalk in front of the abortion clinic with a non-controversial sign,” explained Kotula. “In Wagner’s case, the situation is similar. Mary has been in jail for years for trying to save unborn babies. It seems to me that in this respect Harper is worse than Russian president Vladimir Putin. Putin wants to lower abortion rates. He does not persecute Russian pro-lifers.”

In 2008, during a previous trip to Poland, Harper visited Auschwitz, a German concentration camp, where he wrote in a memorial book: “We are witnesses here to the vestiges of unspeakable cruelty, horror and death. Let us never forget these things and work always to prevent their repetition. Lord, Bless the souls of those who have suffered and perished here and deliver us from evil.”

Commenting on this visit and Harper’s words, Mariusz Dzierżawski from the Right to Life Foundation said that a similar horror takes place in Canada. “Canadian politicians could stop the holocaust of the unborn. The question is whether they want to.”

Polish pro-lifers want Gibbons and Wagner to know that they appreciate their sacrifice for the unborn. They hope that Wagner can visit Poland again after she is released from prison, this time with Gibbons.

Foundation members are cautiously optimistic about the recent Polish presidential election that resulted in a spectacular win for the conservative Andrzej Duda. Next fall, a change of the ruling party is expected, along with the formation of a right-wing government. Their hope is that abortion will be banned completely. The Right to Life Foundation (Fundacja Pro- Prawo do życia) is gathering signatures in support of a total abortion ban, which could be introduced in Parliament this fall.

At the end of the day, Harper went to the port of Gdynia and boarded the Canadian warship HMCS Fredericton, where he spent the night. His visit to the Baltic Sea coincided with the NATO training exercise called Baltops 2015 aimed at countering Russian involvement in Ukraine. Harper was shadowed there by two Russian frigates. After disembarking, he said: “The Royal Canadian Navy's presence here is the physical demonstration that Canada stands up for what is right and good in our troubled world.”