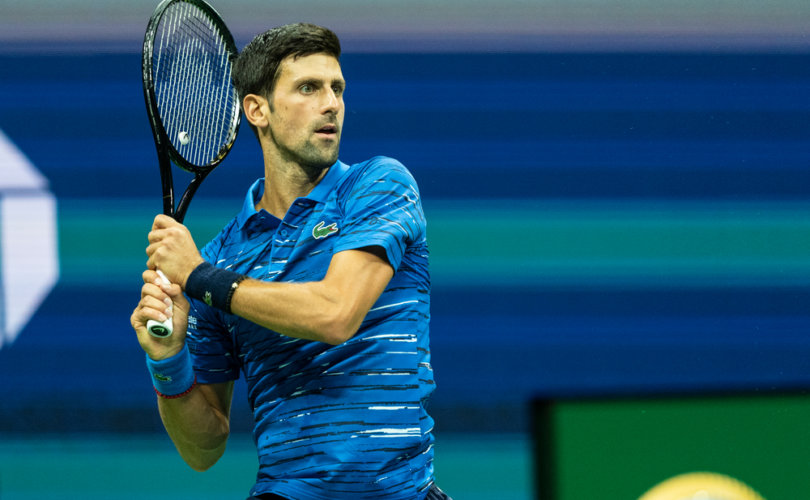 MELBOURNE, Australia (LifeSiteNews) — Tennis ace Novak Djokovic thanked people “around the  world” for their “continuous support,” saying he “can feel it and it is greatly appreciated” as the Serb languishes at an immigration detention hotel in Melbourne.

A petition in support of the world’s top-ranked men’s tennis player, who has previously expressed his opposition to vaccines, garnered more than 45,000 signatures in 24 hours on LifePetitions while numerous protests have been held in Serbia and Australia against the decision by the Australian Border Force (ABF) to reject Djokovic’s medical exemption to the country’s vaccination rules.

The nine-time reigning Australian Open champion now awaits a court hearing on Monday to determine if the ABF decision will be upheld or overturned.

Aside from thanking fans for their ongoing support, Djokovic also wished Orthodox Christians a “Happy Christmas” today, January 7, in what the Julian calendar and Orthodox believers designate as the day of Christ’s birth.

“God’s peace. Christ is born. Happy Christmas. May God’s love invigorate and fulfill you all,” he wrote on Instagram.

The Serbian foreign ministry said earlier today that its people have a “strong impression that Djokovic is a victim of a political game against his will, and that he was lured to travel to Australia in order to be humiliated.”

“Novak Djokovic is not a criminal, terrorist or illegal migrant, but he was treated that way by the Australian authorities, which is causing understandable indignation of his fans and citizens of Serbia,” a statement read.

Serbian President Aleksandar Vučić said yesterday that he has spoken to Djokovic and is in the process of intervening in the dispute.

“I’ve just finished my telephone conversation with Novak Djokovic,” Vučić posted on Instagram. “I told our Novak that the whole of Serbia is with him and that our bodies are doing everything to see that the harassment of the world’s best tennis player is brought to an end immediately.

“In line with all norms of international law, Serbia will fight for Novak, truth and justice. Novak is strong, as we all know.”

Australia’s latest decision to detain female Czech player Renata Voráčová in the same building as Djokovic, reportedly for the same reasons, has added to the controversy as she had already taken part in one warm-up event in Melbourne.

The Grand Slam event at the Australian Open is taking place in Victoria, the state governed by Daniel Andrews – one of the most committed proponents of COVID restrictions in the world.

Meanwhile, it has come to light that Djokovic gave $25,000 in aid to Australian communities damaged by fire in January 2020.

Yes, @MariaSharapova I would like to match your $25k donation to double the aid sent to these communities. We stand by you, #Australia. 🙏🏼 https://t.co/wiUZHzg9cz