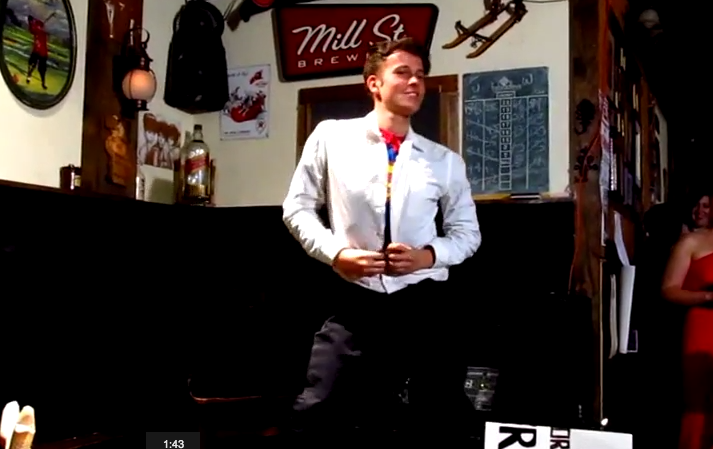 Free the Children employee Michael Lorsch begins a striptease at a Boylesque event.

A manager at the popular Canadian charity Free the Children who helped run the organization’s We Day events, spoke frequently at schools, and led youth trips overseas has resigned after LifeSiteNews reported he was moonlighting as a gay stripper.

Michael Lorsch, former manager of Free the Children's leadership programs in Toronto, resigned Friday after LifeSiteNews ran two stories on August 14 and August 18 about his role as a performer in the homosexual-themed troupe Boylesque, which aims to put “male nudity and sexuality back center-stage where it belongs.”

“A series of half-truths, falsehoods, and misleading statements were published on one specific web site about my activist work with Boylesque T.O.”

Lorsch, who performs under the stage name Mickey D. Liscious, is described on Boylesque’s website this way: “The ladies say he's a sweetheart, the gentleman know better. Mickey D is all about love.health.happiness.equality…and heavy petting.”

In a statement that Free the Children provided to LifeSiteNews Friday, Lorsch says he is stepping down for the sake of the organization. (Free the Children asked that the entire statement be included “instead of only running excerpts to suite [sic] your agenda.” The full letter is published below.)

“I am resigning for the betterment of the work the organization does and the youth our organization might reach,” he writes.

“A series of half-truths, falsehoods, and misleading statements were published on one specific web site about my activist work with Boylesque T.O, and the educational activities I have done with the focus of inclusion and equity. The activities of this web site were clearly intended to damage my reputation and undermine my character,” he continues.

“I am proud of my accomplishments at Free the Children. I believe that the continued coverage of my work with Boylesque T.O would be a distraction and undermine the work Free the Children does,” the letter concludes.

LifeSiteNews asked Lorsch to explain what he meant in referring to “half-truths, falsehoods, and misleading statements” in LifeSiteNews’ original report, but he did not respond.

Free the Children initially defended Lorsch when LifeSiteNews contacted the organization prior to running the first story on August 14. Presented with detailed evidence of Lorsch’s work with Boylesque, Free the Children Executive Director Scott Baker said the charity does not “pass judgment on the private lives of our employees” and “does not discriminate on the basis of gender, race, religion or sexual orientation.”

In the managerial position, Mr. Lorsch directed Free the Children’s programs aimed at forming children into future social justice leaders. The job put him in direct contact with thousands of school-aged children across Canada. He helped run formation camps and led children on trips to overseas destinations.

“It’s a good thing that this X-rated sex show performer won’t be going into our schools anymore and having contact with impressionable children. A lot of parents will breathe a sigh of relief,” Jack Fonseca of Campaign Life Coalition told LifeSiteNews.

Free the Children, founded in 1995 by Catholic brothers Marc and Craig Kielburger, aims at activating young people to fight poverty and injustice in developing nations. Their initiatives include the popular “We Day” that rallies thousands of teens from both Catholic and public schools across Canada at emotionally-charged events with world-leading speakers.

The Kielburgers have been criticized over the years for their waffling views on abortion, for providing contraceptives in overseas health clinics, and for championing “family planning.” So far, however, none of Ontario’s Catholic school boards have dropped their partnerships with the controversial charity.

Gwen Landolt, national vice president of REAL Women of Canada, said it was “very worrisome” that Free the Children would “reluctantly let Mr. Lorsch resign rather than lay him off or dismiss him.”

“What is behind this organization that they were so reluctant to let go this questionable employee? What this indicates is that the whole organization is flawed,” she told LifeSiteNews.

“The fact that they defended Mr. Lorsch's hire absolutely indicates this organization is unsuitable for children. Period. It is a danger to children. It is a harmful organization that no child should have anything to do with.”

Fonseca agrees with Landolt. “Mr. Lorsch resigned of his own accord rather than being shown the door by Free the Children. One is left to wonder if the charity would have allowed Mickey D Liscious to continue as their representative? This scenario would mean that Free the Children doesn’t see anything wrong with sending sex show performers into schools to work with children. Parents still need to be worried about the judgement of those who lead this charity,” he told LifeSiteNews.

John Pacheco, parent and outspoken social conservative who blogs at Catholic-Legate.com, said that a charity that defends an employee who has a public life as a gay stripper has no place in Catholic school boards.

“Catholic school boards should take swift and immediate action to remove Free the Children as a partner,” he told LifeSiteNews. “If not, they are ultimately sending the message that as long as you are ‘helping the poor,’ you can eschew personal holiness and sanctity and engage in raunchy and immoral behavior, outside of work hours.”

“Such a false dichotomy has no place in Catholic schools,” he said.

Andy Pocrnic, who heads Concerned Catholic Parents of Ottawa, said, “Although it's welcome news that Mr. Lorsch has resigned, Free the Children is still on record saying that being a stripper in one's private life doesn't disqualify one from positions that put them in contact with children. If that's still the case, and we have no reason to believe it isn't, the incompatibility of this charity partnering with any Catholic school board becomes very clear to anyone interested in the well-being of our children.”

Fonseca said that the average parent would not be happy to learn their child in school was spending time with a performer of a “lewd” sex show. “It’s not the sort of influence parents want around their kids,” he said, adding that the charity’s defense of their employee should give Catholic schools across Canada plenty of reason to stop sending students to “Me to We” events.

“There is too much baggage with this group that is incompatible with the Catholic identity that should be central to Christian education,” he said.

Michael Lorsch’s full statement on his resignation from Free the Children:

For over two years I was a dedicated member of the Free the Children team. The organization and I both believe in the power young people have to change the world. It is because of that belief, as well as my care and concern for schools, educators, and the youth they serve that I have decided to move on at this time.

A series of half-truths, falsehoods, and misleading statements were published on one specific web site about my activist work with Boylesque T.O, and the educational activities I have done with the focus of inclusion and equity. The activities of this web site were clearly intended to damage my reputation and undermine my character.

I am proud of my accomplishments at Free the Children. I believe that the continued coverage of my work with Boylesque T.O would be a distraction and undermine the work Free the Children does.