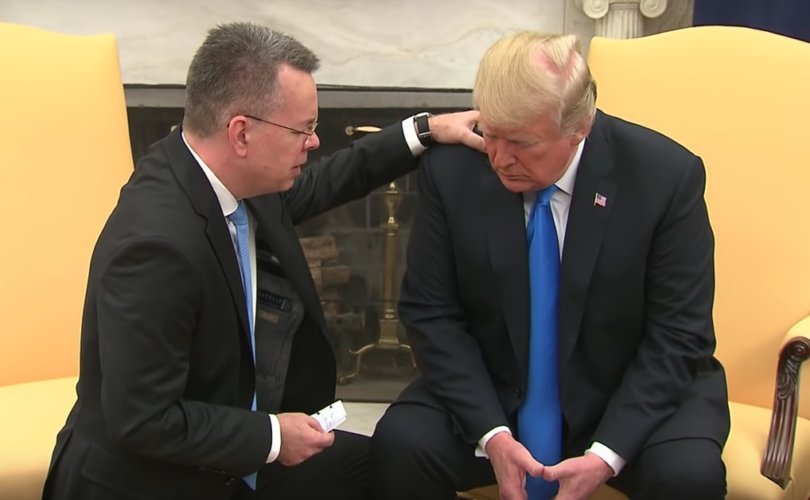 WASHINGTON, D.C., October 15, 2018 (LifeSiteNews) – A North Carolina Protestant pastor imprisoned in Turkey for almost two years prayed for President Donald Trump on Saturday, in a meeting at the White House following his release.

Andrew Brunson had worked in Turkey for 20 years and was arrested in October 2016 as part of a mass crackdown against supposed political opponents of President Recep Tayyip Erdoğan.

He was charged with “Christianization,” and a Turkish judge tried to link Brunson to two groups considered terrorists by the country’s government. Brunson professed his innocent and argued he was being persecuted for his Christian faith, as did the United States government.

After months of public pressure and private negotiations by the Trump administration, Turkey finally released Brunson on Friday, essentially sentencing him to time served. After a stop at an American military hospital in Germany, the Associated Press reports, Brunson was back in the U.S. the next day.

“I just want to congratulate you, because you have galvanized this country,” Trump told Brunson at the White House. “I mean, you just take a look this – there’s so much interest. And it’s your faith, it’s your strength, what you’ve gone through.”

“You really fought for us, unusually so,” Brunson told Trump. “From the time you took office, I know that you’ve been engaged, and Secretary of State Pompeo also was very engaged and fought for us. And Vice President Pence, we’re very grateful.” He added that Sens. Thom Tillis, R-FL, Jeanne Shaheen, D-NH, and Lindsey Graham, R-NC, visited him in prison, and Sen. James Lankford, R-OK, “has been involved from the very beginning.” He also thanked Ambassador John Bolton.

At one point (six minutes into the above video), the pastor offered to pray for the president. Trump gratefully accepted, quipping, “I need it probably more than anybody in this room.”

With a hand on the president’s shoulder, Brunson asked God to give Trump “supernatural wisdom to accomplish all the plans you have for this country and for him. I ask that you give him wisdom in how to lead this country into righteousness.”

The day before the release, NBC News quoted unnamed administration officials as claiming a deal had been struck in which the United States committed to relaxing economic pressure against Turkey. Trump has not elaborated on U.S. negotiations, but has denied that his administration did or would pay “ransom.”

Brunson did not elaborate on his treatment while in Turkish custody, but suggested he will in the future. He also said he will stay in the United States for a while, but didn’t know when or how he would return to his work abroad. “We don’t know what’s ahead of us,” he said.

“We will probably be doing some interviews. Right now, we just want to especially — this is a time to thank the administration and people in government who supported us,” Brunson said. “And that’s especially what we want to emphasize, is our gratefulness, to say we love this country.”