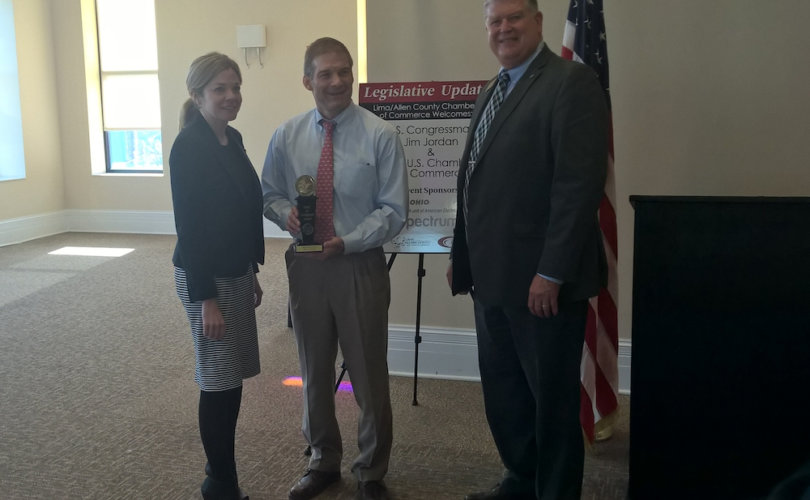 LIMA, Ohio, April 25, 2017 (LifeSiteNews) — Congressman Jim Jordan is a leading member of the Freedom Caucus, a coalition of conservative Representatives in the U.S. House that President Trump blamed for the failure of his healthcare plan earlier this year.

Jordan, R-Urbana, held a Chamber of Commerce business update and a local Town Hall on Monday night. He also sat down with LifeSiteNews to explain his perspective on repealing ObamaCare, ensuring abortion is not funded by tax dollars, defunding Planned Parenthood, and the president's threat to work against his and other Freedom Caucus members' re-election in 2018.

LifeSiteNews: Congressman, congratulations on your Spirit of Enterprise award. The Chamber of Commerce said you had a 93 percent voting record favoring business. That's pretty impressive.

Jim Jordan: Thank you. We're doing all we can to support American businesses and grow the economy.

LSN: You were one of the loudest voices for the repeal of ObamaCare. What happened with President Trump and Speaker Ryan's healthcare bill?

Jordan: Some said we should put legislation repealing ObamaCare on President Trump's desk the first day he entered the office. I strongly supported that. We (both houses of Congress) passed complete repeal legislation fifteen months ago, which was vetoed by President Obama. We could have simply submitted that same bill for the president's signature. But that didn't happen.

LSN: So an alternative proposal was made.

Jordan: Yes. Some of it was repeal, some of it was replace. They mixed it all up. Even supporters called it “ObamaCare Lite.” We (Freedom Caucus members) wanted something better.

LSN: You and other conservatives were going to vote against the president's healthcare plan.

Jordan: They said it was a 'binary choice … take it or leave it.' We wanted something much more consistent with what voters want.

LSN: It didn't even come to a vote. But after its failure, President Trump blamed you and other Freedom Caucus members in the House. He even threatened to work against your re-election.

Jordan: Yeah, well, my attitude is tweets and statements don't change facts. The facts are this bill is not where it should be. Our goal is to improve it and make it much more consistent with what we told the voters we were going to do.

LSN: And now, what is the status of ObamaCare repeal?

Jordan: There is a good chance to get healthcare legislation out of the House in the next two weeks. We will work with the President to move forward, not only on healthcare but on other issues.

LSN: One of the concerns of our readers with Trump and Ryan's healthcare alternative was the possibility of using its “savings” accounts for abortion coverage.

Jordan: Yes. There were safeguards put in that proposal to ensure no tax dollars went to abortion services. And in the current proposal, we are making sure the language doesn't allow loopholes for abortion funding.

LSN: Another disappointment for pro-lifers is that under the Trump/Ryan plan, Planned Parenthood would only be defunded for one year.

Jordan: Yeah, that's all this (current) bill does too … because they're concerned about the 'reconciliation' process (and) senate rules. … Unfortunately, it's only a year.

LSN: And that's not going to change?

Jordan: No. But we should have gotten rid of Planned Parenthood dollars and defunded them nearly three years ago when the Center for Medical Progress (CMP) videos first came out. Unfortunately, our leaders at the time didn't want to push.

LSN: You were on the oversight committee.

Jordan: Yes. In June, when we had a hearing in the oversight committee, I was pretty aggressive with Cecile Richards, the head of Planned Parenthood.

Jordan: We didn't show the (CMP) videos, because our leadership didn't want to. Those videos were the most compelling evidence we had. They weren't fraudulently edited.

Jordan: We didn't even show the videos in the hearing prompted by the videos. We should have shown them in the oversight committee: “Look what you guys said; look at what you guys did. This is showing your disgusting and repulsive behavior, and doing it in an organization that receives tax dollars.” Unfortunately, we didn't deal with it then, and we've got to deal with it now.

LSN: What other pro-life gains are you currently working on?

Jordan: We tried to stop the assisted-suicide bill in Washington D.C. with a Resolution of Disapproval. The city council approved assisted suicide, but Congress has jurisdictional authority over D.C. Unfortunately, the leadership wouldn't let us do it. We'll continue to work on that.

LSN: You certainly have been a friend and champion of the pro-life movement.

Jordan: I believe innocent human life is sacred from conception. This informs all that I do in Congress. I call on Republican leadership to keep their commitment to the American people and defund Planned Parenthood through reconciliation.

LSN: And you’ve been a staunch a defender of the family.

Jordan: I oppose the redefinition of marriage, and I support the right of parents to supervise what their children learn and how they are educated.

LSN: Representative, thank you for taking the time to speak with us.

Jordan: Thank you. Please ask your readers to pray for us in the Freedom Caucus, and for all Representatives in the House.

In his Chamber of Commerce update, Jordan praised Trump's pick of Neil Gorsuch as a Supreme Court justice. He also stated, “I agree completely with the president's actions in Syria. Something this wrong, this evil, we had to respond to.”