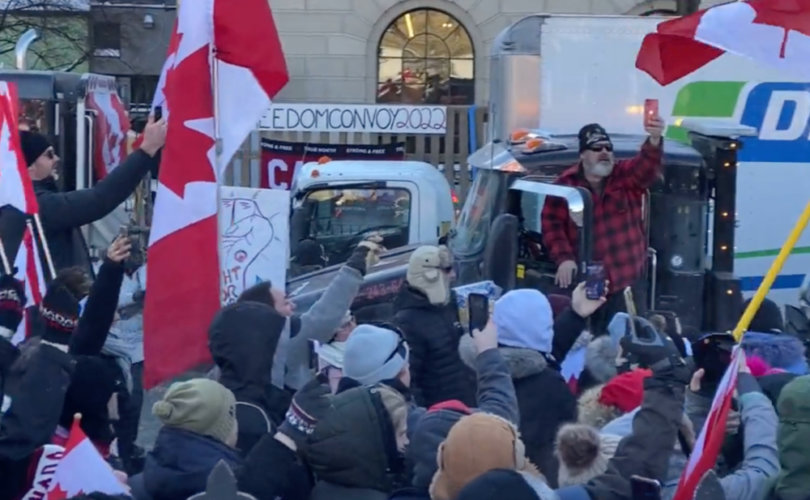 OTTAWA (LifeSiteNews) – Organizers of the Freedom Convoy and medical experts associated with them released a video last night addressing concerns after Ottawa police began seizing fuel and ticketing protesters who supported the convoy.

Police taking away the Fuel from Ppl who donate to Truckers!! pic.twitter.com/6jdJduMlgO

Dr. Paul Elias Alexander, a world renowned medical expert and former Trump White House adviser, opened by saying: “It is time that we stop and we declare this pandemic emergency over.”

He added that the Canadian truckers are “backed by solid science” and that the “government positions of these vaccine mandates have no scientific or medical bases and must be stopped now.”

Acclaimed physician Dr. Roger Hodkinson stated that, “the mandates must be lifted tomorrow,” and “the carnage that’s going on out there without children is indescribable.”

Immediately after the two doctors addressed the legitimacy of the Freedom Convoy’s call to end COVID policy in Canada, a man identified as Jeff spoke about the position of the convoy participants in the wake of the news that Ottawa Police had been taking fuel from truckers.

He reassured supporters of the convoy in his opening statements that “it may bring anxiety, it may bring stress, it may heighten fear or concern for loved ones that maybe you are here supporting this, but we assure you this entire organization, it’s not just a movement, it is an organization of dedicated, focused individuals who are standing unwavering. There are no ruffled feathers in this room or among this team.”

Jeff assured the viewers that the convoy team has worked hand in hand with law enforcement at all times, and there is no tolerance for illegal behavior. “It is a peaceful demonstration,” he added.

“We will not become violent. We will not act out … If they ask you to put your hands behind your back, simply do so. No gestures, no comments. No nods. Simply follow that instruction and be peaceful about it. I, personally, if confronted with this, will take the advice of the kindergarten teacher of my five-year-old son that I miss so much and want to be with. And I will crisscross applesauce and I will sit down and I will not move on the street.”

“We will not leave,” Jeff reiterated before he turned the spotlight over to a man identified as Tom.

Tom said that Ottawa police showed up in a “very aggressive way.”

“It was probably over 100 police officers in tactical gear with snipers on the roof. And I’m very pleased to report that all of our truckers, all of our families, kept their composure,” he said. “It was extremely peaceful. They came in. They took the fuel, which was their intent. Their intent was to come in and confiscate the fuel that we have that was donated or purchased to be distributed for the trucks.”

Although fuel was taken by the police in the attempt to cripple the freedom movement, Tom said that the amount of fuel taken was “absolutely inconsequential” and had “no impact on our operations.”

He said that the event “raised morale” within the group. “So what? They took a little bit of fuel that we’re going to replace, it has no impact on what we’re doing.”

During the press conference last night, Tom said that he would be making a “public statement” to outline what he called “a very measured, reasonable way forward.”