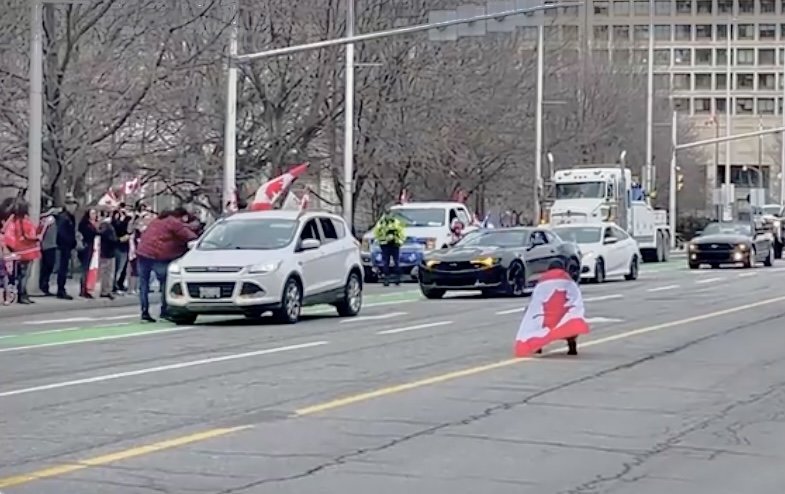 OTTAWA (LifeSiteNews) – A large convoy of cars and trucks from the province of Quebec rolled through Ottawa last Saturday in protest against COVID mandates.

Dubbed the “Next Generation Convoy,” the large group of vehicles, unlike the original Freedom Convoy, did not stop and block streets but instead drove through the capital via a route police mandated they follow.

Video posted on social media by True North shows hundreds of supporters lining the sidewalks giving their support to the convoy, which had earlier made its way through multiple cities and towns in Quebec before heading to Canada’s capital on Saturday.

The “Next Generation Convoy” was the first large-scale protest against COVID mandates to be held in Ottawa since the original Freedom Convoy took place for three weeks in February in the capital protesting an end to all COVID mandates.

According to the leaders of the new Quebec convoy, the reason for the protest was to call for an end to all COVID mandates and rules, as well as to fight for the freedom of the generations of the future.

Organizers for the “Next Generation Convoy” had notified the Ottawa Police Service (OPS) in advance that they were planning on rolling through the city and asked all participants to refrain from honking due to a law banning the practice in the city.

The OPS had warned convoy participants that there would be “a strong police enforcement stance,” and indeed tow trucks were on site.

However, the OPS said in a statement that there were no “incidents to report” from the “Next Generation Convoy.”

Currently, Quebec still has some COVID mandates in place such as masking, which will stay until April 15. The province recently ditched its COVID vaccine passport.

During the height of the COVID crisis, Quebec had some of the harshest rules in the world, which included at times a curfew along with banning the un-jabbed from attending church.

The original Freedom Convoy saw Canadian Prime Minister Justin Trudeau enact the Emergencies Act (EA) against them on February 14, which subsequently cleared them out. The EA was revoked on February 23.

Trudeau’s use of the EA gave the federal government unparalleled powers, such as the ability to freeze bank accounts, even without a court order. Many accounts were frozen; however, they were done so under the orders of police, who then contacted banks.

Just recently, a top official with Canada’s Royal Canadian Mounted Police (RCMP) said there is no evidence of any links to terrorist activity in the funding of the Freedom Convoy.

Canada’s state-funded broadcaster CBC had to retract a story that falsely claimed most support for the Freedom Convoy came from foreigners.

The CBC had also earlier retracted a story from January that falsely claimed Russia was behind the Freedom Convoy.