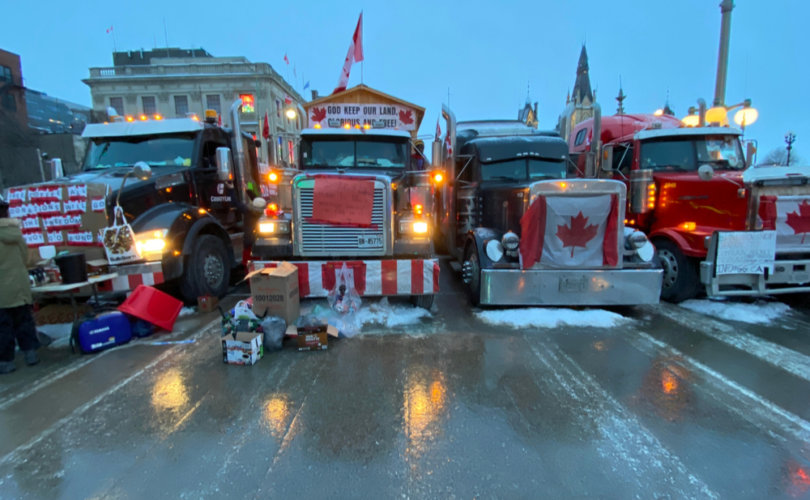 Originally filed by 21-year-old Ottawa civil servant Zexi Li on February 4, 2022, the class action suit now names plaintiffs who have businesses or had employment in the Canadian capital city’s downtown core. According to the February 17 filing, all the plaintiffs are being represented by Ottawa litigation lawyers Champ & Associates.

The defendants listed include Convoy organizers Chris Barber, Benjamin Dichter, and Tamara Lich, as well as dozens of others.

The updated order now includes a Mareva Injunction, which means that the defendants are not free to sell, give away or otherwise dispose of their assets. A lawyer for the litigants, Paul Champ, emphasized this part of the document in a tweet he posted last night.

The Ontario Superior Court issued this Order today. Everyone with notice cannot (1) directly/indirectly sell, transfer, assign, or similarly deal with the assets listed in Schedule “A” to the Order; or (2) assist in any way with acts described in (1). https://t.co/tvpGQNoZhh

Champ also drew attention to the unprecedented freezing of the Freedom Convoy’s cryptocurrency, saying that it was “exceptional advocacy” on the part of Toronto’s Lenczner Slaght litigation team.

This was a huge effort and full credit to the amazing team of litigators at @LencznerSlaght. We retained them to lead this unprecedented Mareva order freezing bitcoin and other crypto assets to hopefully compensate Ottawa residents and businesses one day. Exceptional advocacy. https://t.co/TDyHlAxJzA

According to the state-funded Canadian Broadcasting Corporation (CBC), Champ told media his team is going to begin to add defendants who donated to the truckers. The Ottawa Citizen reported today that the “the claim has also expanded to include anyone who donated to the convoy after Feb. 4.”