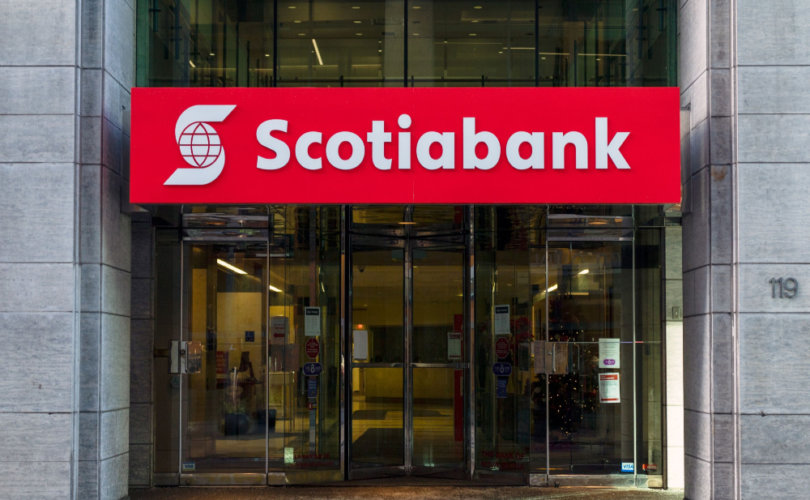 (LifeSiteNews) – One of the main leaders of the trucker Freedom Convoy says he received an apology from the head office of Scotiabank for freezing his bank account due to his involvement with the protests.

As was first reported by Marc Patrone on Benjamin Dichter’s substack, Dichter disclosed recently that he was emailed a letter from the bank in March.

“Please accept our sincere apologies for the frustration and inconvenience this situation may have caused,” said the email to Dichter from the office of Scotiabank CEO Brian J. Porter dated March 3.

The letter continued, “We can confirm that financial institutions acted quickly to unfreeze accounts after the RCMP notified us that it believes that individuals and entities previously identified are no longer engaged in conduct or activities prohibited under the Emergency Measures Regulations.”

Dichter said, as reported by Patrone, that he does not “believe the banks went out of their way to target clients,” but rather he believes such an order “came from somewhere else.”

“They didn’t do it on their own accord,” Dichter said.

Dichter had written to Scotiabank to ask them to explain to him why his accounts had been frozen.

For three weeks in February, the Freedom Convoy took to the streets of Ottawa to demand an end to all COVID mandates. As a result, Canadian Prime Minister Justin Trudeau on February 14 enacted the Emergencies Act (EA) to shut down the Freedom Convoy.

However, Finance Minister Chrystia Freeland, who has ties to the globalist World Economic Forum (WEF), used the EA to shut down the Freedom Convoy’s GoFundMe page, in addition to monitoring “all forms of transactions, including digital assets such as cryptocurrencies.”

The EA was also used to freeze hundreds of bank accounts, some of whom for people were not actively involved in the protests. It was the task of Canada’s national police force, the Royal Canadian Mounted Police (RCMP), to provide banks the lists of accounts that should be frozen. However, banks froze many accounts at their own discretion.

RCMP Commissioner Brenda Lucki also recently revealed to an inquiry that her police force did not request help from Trudeau in the form of the EA.

Lucki said a few weeks ago, “No, there was never a question of requesting the Emergencies Act.”

As it stands now, four legal organizations are challenging the Trudeau government’s use of EA.

The Canadian Civil Liberties Association said the move to enact the EA was an “unjustifiable” violation of civil rights and has launched legal action against the Trudeau government.

The Trudeau government is also facing another lawsuit in federal court by the leader of the People’s Party of Canada Maxime Bernier for its still-active travel ban on the vaccine free. This case has a court date set for September 2022.

Last month, the Trudeau government cited “cabinet confidentiality” as the reason for refusing to disclose why it used the EA to crush the Freedom Convoy in response to a rash of legal challenges against its use.

Mainstream media coverage of the Freedom Convoy was heavily skewed against the protests and in favor of Trudeau’s use of the EA.

Reports that protesters had started a fire were proved to be false, and recently a top official with the RCMP said there is no evidence of any links to terrorist activity in the funding of the Freedom Convoy.

The author of the EA itself  warned that Trudeau’s use of it may have set a bad precedent.