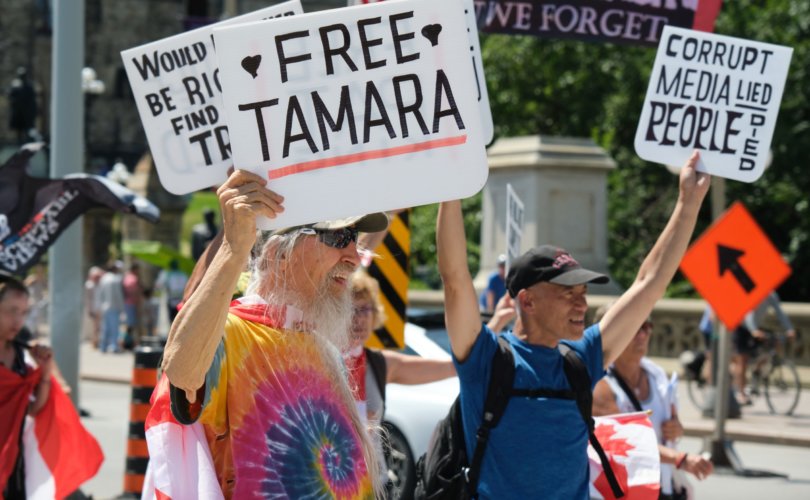 Protesters demand the release of Tamara Lich from jail.Shutterstock

OTTAWA (LifeSiteNews) – A Ontario Court yesterday afternoon held over a bail review for Canadian Freedom Convoy leader Tamara Lich, meaning she will stay behind bars until her next court date of July 25. Lich was jailed for breaching the conditions of her initial release.

During a virtual court appearance in an Ottawa court, it was reported that prosecutors threatened Lich with a possible three-year jail sentence for mischief charges and a maximum 10-year sentence for her minor bail breach.

Come July 25, Lich will have spent a cumulative 48 days behind bars.

Many blasted the continued jailing of Lich, likening it to her being nothing more than a “political” prisoner.

“Tamara didn’t commit any act of violence, she didn’t use any weapon, she didn’t utter any threats, she didn’t cause any damage or injuries. She did peacefully assemble with thousands of Canadians and only asked for the Trudeau government to end the COViD mandates! That’s it!,” tweeted retired RCMP staff sergeant Geoff Buxcey.

Political commentator Cory Morgan of the Western Standard tweeted, “If there was any real case to be made for that BS story of insurrection, she would have been charged for that. Why have no treason or insurrection charges been laid? Oh yeah. Because it didn’t happen.”

In another tweet, Morgan wrote, “Tamara Lich is a political prisoner and has no income while locked up. A site has been set up to help her out.  Donate a little and be sure to share. We can’t let the state punish her and her family like this.”

Canadian businessman and Trudeau critic Brett Wilson was direct in his opposition to Lich’s continued jailing.

“A pretty ***ked up judiciary when ⁦@JustinTrudeau and his moronic team can ensure Lich stays in jail and a sexual predator wanders the streets,” tweeted Wilson.

Last week, Justice of the Peace Paul Harris denied Lich bail, saying to her “Your detention is necessary to maintain confidence in the administration of justice.”

Lich was arrested on June 27 in her hometown of Medicine Hat, Alberta for a second time. Her second arrest came about after she allegedly violated her bail conditions.

The crown argued in a daylong hearing in early July that Lich violated her bail conditions by having a photo taken with another person associated with the Freedom Convoy at the annual George Jonas Freedom Award from the Justice Centre for Constitutional Freedoms (JCCF) last month in Toronto.

A GiveSendGo fundraiser has been set up for Lich, with approval from her lawyers, which to date has raised over $58,000.