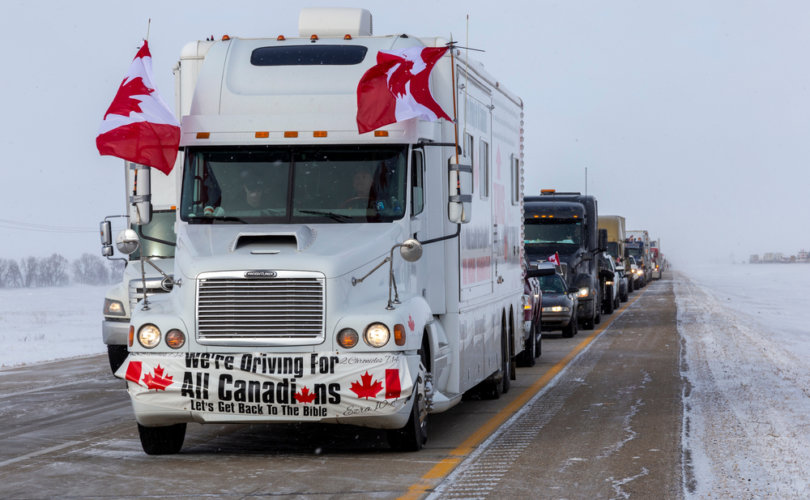 Despite the non-violent nature of the “Freedom Convoy” demonstration that occurred in Ottawa for three weeks earlier this year in protest of COVID restrictions, two of the primary organizers, Tamara Lich and Chris Barber, have now been hit with six additional charges and if convicted, could face five years in prison.

According to the CBC, the charges stem from the “blocking and obstructing [of] one or more highways” in defiance of police and government dictates telling the protesters to go home.

While both Lich and Barber have been released from jail on bail since their arrests, Lich was initially denied bail by a judge who had previously run as a Liberal Party Candidate, causing some people to accuse Prime Minister Justin Trudeau and his government of holding her as a political prisoner.

On the same day Lich and Barber were hit with more charges, Ottawa’s chief of police reluctantly admitted that during the police crackdown of the protest following Trudeau’s invocation of the never-before-used Emergencies Act, not a single charge for weapons possession came down, despite the constant accusations that the Freedom Convoy protesters were “insurrectionists” and posed a threat to national security.

Over the last few weeks there have also been multiple substantiated reports revealing that despite statements from government officials and mainstream media, the funding of the protest was mostly Canadian in origin, not foreign, and did not have ties to terrorism or criminal entities, as had been alleged.

The significance of the government’s backtracking on the nature of the Freedom Convoy protest is monumental, as it was these arguments that the Trudeau government used to justify invoking the Emergencies Act, which allowed it to use the national police force to physically remove peaceful protesters while demanding financial institutions freeze the bank accounts of private citizens without a court order.

As a result of this backtracking, the state-funded CBC has since had to retract a story that falsely claimed most support for the Freedom Convoy came from foreigners.