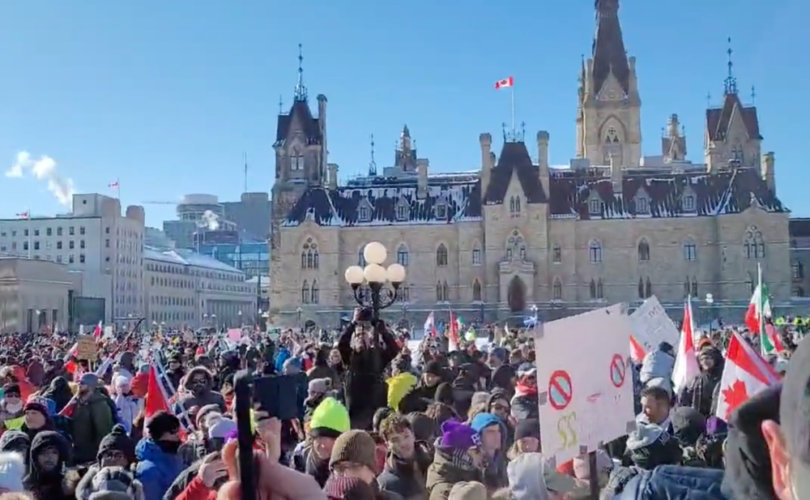 OTTAWA, Ontario (LifeSiteNews) — Spokespeople and individual truckers associated with the Freedom Convoy have made it clear that they are not going anywhere, following Prime Minister Justin Trudeau saying he will enact the Emergencies Act.

A trucker named David Paisley spoke with the Daily Wire today and said: “No one really cares about any new announcement.”

“They’ve already been doing these ‘emergency powers’ and all it does is make people dig their heels in more,” Paisley added. “The irony … is that these very powers and threats are why we are here.”

One of the men, Jeff, said that there is “no reason” to be nervous and that he wanted to “reassure” supporters that their positions haven’t changed.

He mentioned rumors that the truckers had made a deal with local police to get their trucks out of Ottawa, but he denied this. According to Jeff, some of the trucks had moved from residential neighborhoods on their own accord and joined the convoy downtown because their “intention was never to be an inconvenience to the residents of Ottawa.”

He also said that in light of threats from the federal government about financial assets being seized, the convoy does not foresee any issues in providing resources to demonstrators.

Jeff said that they have more supplies than they need, and that cash donations keep flooding in, as well as donations of services from the surrounding area.

This is in line with what David Paisley told the Daily Wire. He said, “You come and sit in the driver’s seat for a few hours and you’ll be able to fill up your wallet again. It’s incredible. People are just handing you fifties, hundreds, packs of hundreds. A friend of mine received a Bible and when he opened it up it had 500 cash inside the bible.”

Those speaking on behalf of the truckers reiterated their commitment to peaceful protest and urged supporter to remain calm and not overreact to any announcements from the government.

“Hold the line, ladies and gentlemen,” said organizer Pat King, “do not back down, we got your backs.”

A woman named Dana gave a briefing on the financial aspects of the movement. Currently there are Canadian veterans organizing a “collection through the community.” She said that “this has been incredibly helpful for emergency situations that have tide[d] us over while we are trying to release the well-needed funds.”

One step they have taken is the initiation of the “family express support fund,” which pairs a donor directly with a recipient truck driver.

A man named George appealed to Canadian patriotism. He said that “now is the tipping point,” and that “we need to band together even more … [with] the Emergencies Act.”

He called it a “scare tactic” and mentioned that there are still parliamentary procedures that have to take place before the Emergencies Act can be enforced.

Numerous critics have said that Trudeau’s power grab stands on shaky legal grounds. The left-wing Toronto Star’s editorial position is that invoking the act was “a shocking admission of failure.”

A columnist for the Ottawa Sun called the move “largely symbolic,” and questioned what could actually be done.

“Now is the time for Canada to unite as one,” he said. He also said there is “help coming from the south,” which may refer to American truckers, but he did not specify.

Jeff finished by saying, “We will remain here peacefully, waiting to be acknowledged by the leaders of the country as it is our democratic right … To all the people that support us, thank you and we love you.”