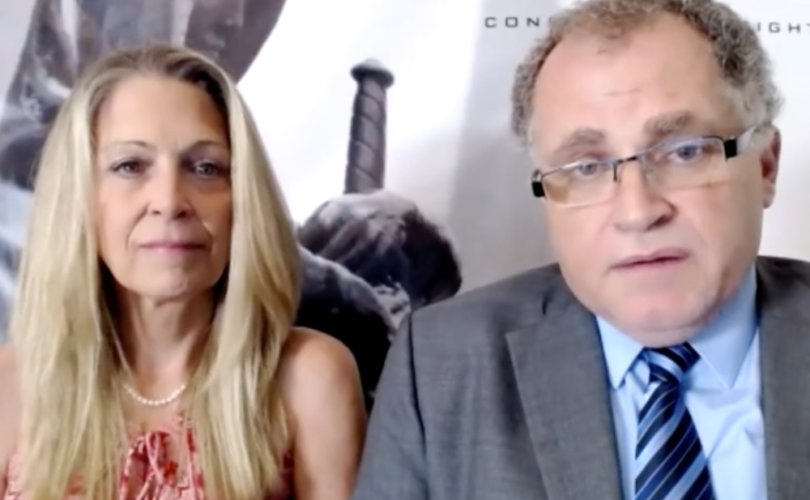 SURREY, British Columbia  (LifeSiteNews) —  Canadians have a new, printable weapon in their struggle against COVID tyranny, and it’s entirely based in the law.

During an online seminar on Wednesday evening, Action4Canada’s Tanya Gaw offered Canadians a new tool they can use to fight the “unconstitutional” vaccine passports and travel restrictions within the country: the “VaxPass: Business Violations of Customers” notice.

The printable document was drafted by Action4Canada specifically to help citizens assert their rights if businesses or other citizens discriminate against them because of their vaccination status.

Gaw said that the notices are “very effective” as they invoke laws already found in the Canadian Charter of Rights and Freedoms, the Constitution Act, the Bill of Rights, and the Canadian Human Rights Act, among others.

“There are no provisions in any orders of any health minister, doctor, or provincial legislation, that can,
nor pretend that any measures can, override Charter or other pre-Charter constitutional rights,” Action4Canada’s “VaxPass” Notice of Liability document informs readers.

Notices of Liability are legal documents that inform a person, business-owner, or anyone else  that they are in violation of the law. The notice warns that if the person served with the notice does not “cease and desist,” they are opening themselves up to liability personally, criminally, and civilly.

Gaw, the founder of Action4Canada, cited in her Wednesday seminar a Public Health Agency of Canada (PHAC) official statement indicating that immunization cannot be made mandatory under Canadian law.

“Unlike some countries, immunization is not mandatory in Canada; it cannot be made mandatory because of the Canadian Constitution,” reads PHAC’s 1996 “Canadian National Report on Immunization.”

Explaining the legal implications of a Canadian’s right to refuse vaccination, Gaw stated that if nobody can legally mandate a vaccine, then “they cannot [legally] mandate a vax pass.”

“Vaccination is voluntary in Canada. Even if the government attempts to mandate it, there is no law, nor can there be, as it is a violation of Human Rights and International Agreements. Businesses are infringing on human rights and putting themselves personally at risk of a civil lawsuit for damages, and potential imprisonment, by attempting to impose ANY vaccine including the COVID-19 experimental injections on patrons in exchange for services,” the notice of liability explains.

Gaw informed her fellow Canadians during the seminar that any law that contradicts the Canadian Constitution is null and void.

According to Gaw, this means that even if the public health measures now in place were law, which they are not, they would be “unenforceable” due to the fact that they contradict every citizen’s fundamental freedoms already immutably enshrined in the law.

Invoking the Canadian Human Rights Act, which prevents any discriminatory practices including the denial of a “good, service, facility or accommodation,” the notice makes clear that any attempt to refuse service; instigate confrontation; threaten to remove from the premises; harass in an attempt to demean, humiliate, or coerce; based on an individual’s vaccination status, constitutes unlawful discrimination.

Going into more detail, the document warns business owners that they should not, and cannot legally, participate in the violation of a fellow citizen’s fundamental rights without opening themselves up to personal, criminal, and civil liability.

“Citizens are under no moral or legal obligation to comply with any Orders to subject themselves to an experimental treatment… Your participation in enforcing the unlawful acts of the government makes you complicit and therefore, personally liable,” states the notice.

As Gaw explained in the seminar, “I was just following orders” is not a valid legal defense.

Later in the seminar, Gaw mentioned that her organization has compiled a guide for citizens to print and keep in their vehicles and on their person, so they can adequately understand and invoke their legally protected rights when it comes to travel.

As stated by Gaw, Canada does not have “borders between provinces” but  has “boundaries” instead. These “boundaries” do not require citizens to provide any identification, legal, medical, or otherwise, as a condition of entry.

“Every citizen has the guaranteed right to travel in Canada. The right to enter, remain, and leave Canada,”  Action4Canada’s site reads.

Citing section 6 of the Canadian Charter of Rights and Freedoms, the Mobility Rights Provision, Gaw’s organization reminds Canadians that included in their right to move freely and unobstructed across the country, is the fundamental right to seek employment in, or residence in, any province in Canada.

Constitutional rights lawyer Rocco Galati is currently representing Gaw, Action4Canada, and 18 other parties as plaintiffs in a lawsuit filed in the British Columbia Supreme Court.

The suit, which personally names Prime Minister Justin Trudeau among other government officials as defendants, is aiming to seek an injunction of the “dictatorial” and “illegal” so-called “COVID-19 measures” that have stripped Canadians of their inalienable rights.

“This is not a medical or health agenda, this is a political one,” said Galati in a press conference about the suit.

“They want everybody vaccinated for whatever reason. Up until now, there has never been a problem with people exercising their choice.”

In Wednesday’s seminar, Gaw also informed her supporters that, in the near future, notices will be drafted that specifically apply to the media and press for their involvement in promoting the “agenda fueled by fear.”

The Canadian Broadcasting Corporation (CBC), without naming Gaw or Action4Canada, wrote a piece last week attempting to dismiss Notices of Liability as “pseudo legal” and referred to freedom movements as “fringe” and “anti-government.”

Addressing the article in her seminar, Gaw repudiated the claims made by the CBC and restated the real mission behind her Action4Canada movement.

“Anti-government? We are anti-corrupt government,” she said.

“We are anti-[forced] experimental injection.”