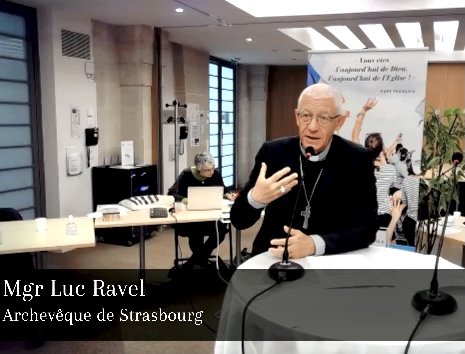 (LifeSiteNews) — Archbishop Luc Ravel of Strasbourg in the eastern Alsace region of France has asked all pastoral workers in his archdiocese assisting frail or elderly people to get the experimental “vaccine” against COVID-19 as an act of “charity.”

He compared receiving the shot to acting as the missionaries of old who faced dangers in order to evangelize in Asia and in Africa.

Archbishop Ravel invoked Pope Francis as the driving force behind his request, which goes further than the official vaccine mandate effective Wednesday, September 15 in France for all workers and volunteers in hospitals and rest homes for the dependent elderly.

The archbishop recalled that all hospital chaplains, deacons and lay people active in health facilities must receive the jab because of the legal mandate, adding that “hospital chaplains who consider they have particular reasons” justifying their refusal to be vaccinated should “present them in writing” to the archbishop himself.

In his particularly abrupt note, Ravel stated, “In a general way, all pastoral workers have regular and frequent contacts with frail or elderly people, including in these people’s own homes, and to me this seems to offer ample justification for them to get the vaccine.”

“I am particularly sensitive to the words of Pope Francis who sees in this vaccine an act of charity offered to others, in particular to the weakest and the littlest in our society. I therefore do not accept the legitimacy of arguments that claim to dispense with the vaccination in the name of a hypothetical danger to health, be it immediate or delayed: placing oneself at the service of evangelization has always been, in one way or another, an endangerment and a gift of self. Missionaries who formerly set out for Africa or Asia with a low hope of survival have given a vivid testimony of this. Seeking to avoid vaccination is in consequence akin to a ‘de-missionary’ attitude. I trust you all to understand.”

His wordplay on the French word “demission,” which means “resignation” or “quitting,” amounts to guilting those who refuse the spike injection to protect their own health, as egoists who are deliberately stepping down from their evangelical responsibilities.

In fact, the archbishop is making them look as if they were refusing to go out of their way to protect the health of the people they would be putting at risk by refusing the experimental “vaccine.”

The comparison made by Ravel with the courageous missionaries of times gone by is clearly manipulative.

It is true that in previous centuries, besides the risk of facing hostility and even martyrdom at the hands of heathens, missionaries knew they could catch dangerous tropical diseases and infections in unfavorable environments when leaving their temperate countries to preach the gospel. Often there would be no hospital available, and only the crudest of treatments, making the probability of dying within a few years quite high. Indeed, they truly and willingly sacrificed their lives in order to bring the truth of Our Lord to those who did not know Him out of self-giving love.

Can it be argued that in order to bring the Sacraments or plain Christian comfort to the sick and the elderly, those who represent the Catholic Church should be willing to sacrifice themselves? Well, yes. Catholic priests who ministered to leper colonies, such as St. Damien of Molokai who went on to die of leprosy, or to victims dying of the plague, such as Bishop de Belsunce in Marseille in 1720 (he survived).

There are several differences, however. Accepting a high risk of illness or even death does not mean deliberately running the risk of recklessly contaminating oneself with it: This would be wrong for whatever reason and go far beyond the disregard of self that Ravel claims to promote.

Second, the men and women who left home and country to travel to dangerous lands for the love of God went willingly and of their own accord. With the mandatory “vaccine,” and moral pressure such as that exerted by Archbishop Ravel, there is no choice.

Also, the efficiency of the “vaccine” is not proved: vaccinated people can become infected with COVID and continue to spread it. There is no lack of examples of frail people who despite being vaccinated, caught the disease and died of it, meaning they were not in fact protected by the jab, while large numbers of contaminations have already taken place in health facilities where the large majority of patients and caregivers were vaccinated – such as the Sant’Eugenio hospital in Rome where a patient who twice tested “negative” turned out to be positive, and a cluster developed among the largely vaccinated population.

In France, official numbers say 80 percent of those in hospital because of COVID were not vaccinated, but they are different from British or Israeli statistics. In Israel, “cases” have gone up at a high rate the last few weeks despite 78 percent of citizens age 12 and over are “fully vaccinated.” The situation is so alarming, according to the authorities, that people are now getting a third booster – proof if any were needed that the “vaccine” is not protecting the population.

Ravel appears to be swallowing official narratives without question, going out of his way to follow Pope Francis’ steps in touting the experimental jab to everyone.

The archbishop did not even raise the moral issue involved: the four “vaccines” recognized by France as fulfilling the vaccine obligation (Pfizer, Moderna, Janssen and AstraZeneca) were all at least tested on living cell lines obtained through abortion; some use these cells in their production process. And while it is true that assessment of the admissibility of these shots has led the Congregation for the Doctrine of the Faith to affirm that in the face of grave threat to a population’s health, it is not morally wrong to use “vaccines” obtained in such a way, clear opposition to the use of aborted fetal cell lines is called for by the Roman dicastery. It’s a point that proponents of the experimental jabs appear to have completely forgotten.

Ravel’s curt and hurtful note can be read in another way, however. Would he need to be putting pressure on his flock if the COVID “vaccines” were no more harmful than “ordinary” vaccines most people take without question? Let’s re-read what he said:

“I therefore do not accept the legitimacy of arguments that claim to dispense with the vaccination in the name of a hypothetical danger to health, be it immediate or delayed: placing oneself at the service of evangelization has always been, in one way or another, an endangerment and a gift of self.”

Even if the archbishop is talking about a “hypothetical” danger – which does downplay the adverse effects of the COVID jabs – he does suggest that getting them means acceptance of putting oneself in danger; indeed, in the same sentence, he speaks of the (objective) “endangerment of self.”

Adverse effects of the COVID jab are among the main motives leading hundreds of thousands of French citizens into the streets to protest against the mandatory “vaccine” for health professionals and discriminatory health passes for all the unvaccinated. Last Saturday, once again more than 200 demonstrations took place in France against the government’s COVID policies. Doctors, nurses, caregivers, pharmacists and first responders are putting down tools as the mandatory vaccine becomes law on Wednesday.

Why are people afraid? As “cases” and hospitalizations continue to decrease according to official numbers, it has become commonplace to hear of sudden strokes, heart conditions, menstrual problems, limb paralysis, shingles attacks and other health issues – including deaths – among recently vaccinated people in one’s own surroundings. While the mainstream media have never stopped counting the victims (real or supposed) of COVID, these problems are brushed aside or simply ignored in the official press, and an increasing number of people in France are now questioning the sincerity of the official narrative.

Finally, Ravel is insisting on “vaccination” at any cost – but like the large majority of French bishops, he never promoted COVID treatments such as hydroxychloroquine or ivermectin, whose side effects are negligible when correctly administered.