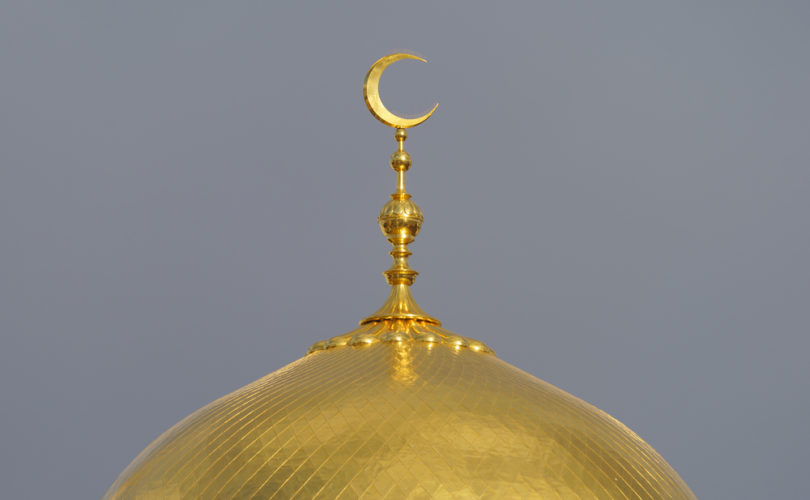 TOURS, France, April 23, 2021 (LifeSiteNews) — Vincent Jordy, recently named archbishop of Tours in the center of France, has been forced to publish a statement after declarations by a local Muslim leader revealed that the Catholic diocese has given funds for the construction of a large mosque, and that these funds can be said to have been financed by the “denier du culte”: parish contributions given by Catholics in the diocese for its upkeep and operating costs.

The story broke ten days ago when a local newspaper, la Nouvelle République, published a story for the beginning of Ramadan on April 13, with comments by the president of the Muslim community of the department of Indre-et-Loire in the Loire valley explaining that the new Grand Mosque of Menneton was not yet ready to receive the Muslim faithful, in particular in its areas destined for public worship.

Salah Merabti, talking about COVID restrictions that will prevent the faithful from “breaking the fast” in communal dinners at their present mosque, said he hoped that next year, works will have been completed in the new building, for which €4 million euro (nearly $5 million) have already been spent. 2 million euro worth of funds are lacking at present to pay for the roof, the dome, and sealing work. The construction project is already several weeks or months late because of COVID-19, and now the price of building materials has risen steeply, compromising the Muslim community’s ability to finance future contracts.

It was at this point that Merabti spoke about those who had helped or are still helping with the funding of the project: “In Paris, I met the boss of Coca-Cola Algeria who gave us the sum of €150,000 for the roof. This is exceptional. We also received gifts from elected officials of the [Tours] metropolis, from the Jewish community of Tours, and from the diocese, for the worshiping area of the mosque. This is a great comfort.”

The story was picked up by the independent Catholic website “Riposte-Catholique,” which asked: “Are we to understand that parish funding of the church has been diverted for the needs of the Muslim community? This is a question that should be put to the accounting office of the diocese.”

The diocese of Tours ordinarily receives a yearly global budget of some €1.6 million through parish contributions, compared to yearly operating costs of about €6.7 million, for which Sunday collections, gifts on the occasion of weddings and funerals and Mass intentions also provide.

While the diocese had a comfortable sum of nearly €9.5 million stashed away at the end of 2019, its financial situation has been badly affected by the COVID-19 crisis, leading to a dramatic appeal from Bishop Jordy this month. He underscored the “total decrease” of Sunday collections since the measures to contain the pandemic began, as well as an almost total decrease of contributions on the occasion of some sacraments and of parish funding; even gifts for Mass intentions have declined “very significantly,” he deplored. Jordy asked all the Catholics of his diocese to chip in, adding that this was “vital.”

Under these circumstances, the timing of Salah Merabti’s expression of thanks to the Archdiocese of Tours could hardly have been more unfortunate, especially when it was picked up by Riposte catholique and commented on in social media, and questions followed to diocesan officials.

Bishop Vincent Jordy published a statement on April 15, only two days after the news of diocesan funding for a mosque in Tours broke:

In 1996, during the visit to Tours of Pope Saint John Paul II, as subsidies were almost non-existent, the diocese had launched an appeal for donations to ensure the funding of this reception. On this occasion, the Muslim community of Tours wished to make a symbolic donation. In return, the diocese of Tours wished to make a similar and symbolic donation on the occasion of the launching of the Tours mosque project more than 15 years ago.

It therefore appears that the archdiocese’s donation for the construction of a Muslim place of worship actually took place under Jordy's predecessor, and quite a long time ago. But local Catholics are asking for explanations: why were they not informed of this donation? How much was given for the visit of John Paul II by the Muslims, and was an equivalent sum donated for the mosque? What did the bishop mean by a “similar” and “symbolic” gift? One member of a Catholic internet forum wrote:

As for the ‘reminder’ of a donation made by a Muslim community of Tours in 1996, 25 years ago, for the visit of John Paul II, which would justify a donation in return today, it is a complete joke. I don’t know why this Muslim community wanted to make this donation, if it is true, but in any case, this Muslim community has never financed the building of a church. The fact that the Tours diocese wants to appear as one of the financiers of the Tours mosque marks the end of its existence as a Catholic diocese. Let it apologize to its donors, if it still has the strength.

Other Catholics underscored that is one thing to help pay for the visit of a Pope to a local community, and another to fund the construction of a lasting place of worship. Such criticism has of course been fueled over the last years after a number of Islamic attacks hit France, including the cutting of the throat of an old priest, Fr. Jacques Hamel, while he was celebrating Mass, and another terrorist attack on Catholics in a church in Nice at the beginning of last year. But even without these tragic incidents, the presence of a growing and vital Muslim community in France, which benefits from local “anti-discrimination” laws, has led to fears and tensions.

It is a sign of the times that last year, president Emmanuel Macron joined a Muslim feast celebrating the end of Ramadan in June, but did not even send Christmas or Easter wishes to French Catholics in the last few months.

Questions were also raised about the diocese’s right to use funds given by Catholic donors for an object that is so obviously distant from the reasons for which they were given. The faithful contribute to the financing of Catholic worship in all its dimensions, including the upkeep of parish churches and diocesan buildings, and income for diocesan priests — not the funding of places of worship for other religions. The diocesan association of Tours official statutes laconically recall that its funds are to cover “the upkeep of worship.” Catholic worship, of course…

A local Catholic complained: “If I had wanted to fund the construction of a mosque, I would have done it myself directly.” Another remarked: “John Paul II went away, but the mosque will remain.”

This is not the first time that a French diocese has given money donated by the faithful towards Islamic interests. The rebuilding of an Islamic place of worship that was destroyed by arson was helped along to the tune of €5,000 by the diocese of Auch (southwest France) in 2015. “Charity knows no borders,” explained the local Bishop, Maurice Gardès, at the time. This donation also triggered a wave of criticism, leading the diocese to state later that it had also given €12,000 for persecuted Christians in the Middle East.

At least the diocese of Auch publicly announced the gift when it was made. The news led to a sharp decline in parish funding donations. In the Catholic weekly Famille chrétienne, a specialist of Islam, Annie Laurent, also underlined the danger of relativism linked to such participation in the building of Islamic mosques in France: “The Koranic message aims to discredit the great Christian mysteries of the Incarnation, the Trinity, the Redemption, the Resurrection of Jesus, etc.,” she wrote.

In May of last year, the diocese of Bordeaux called on local Catholics to give generous donations to the local mosques’ social benefit funds account in order to help “sub-Saharan students living in Bordeaux and its surroundings.” Due to COVID restrictions, four local mosques had asked for money to pay for food packages for destitute Muslims who would otherwise have joined meals at the mosque. Such food aid is obviously on another level than the funding of places of worship, but at the same time the Catholic diocese of Bordeaux has recently multiplied events together with Islamic dignitaries that go beyond humanitarian gestures, such as when a local imam, Hassan Belmajdoub, known for having invited radical preachers to his mosque, was asked to speak in a Catholic church in November 2017 on the theme: “Encountering the other in all sincerity.”