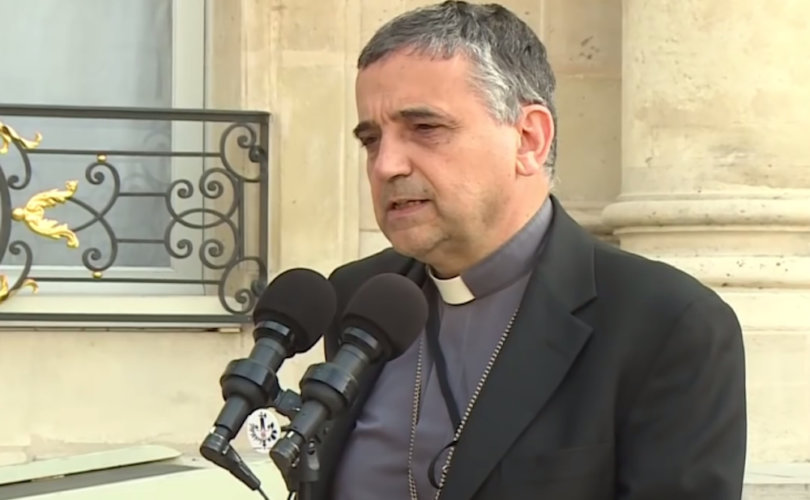 November 9, 2016 (LifeSiteNews) — The bishop of Rouen in the Norman town of France, where Saint Joan of Arc was burned at the stake in 1431, organized an unprecedented public ceremony on the feast of All Hallows at his cathedral, welcoming divorced and remarried couples of the diocese for a special benediction.

The couples were personally invited in a letter distributed by local parishes as part of a special “Year of Mercy” initiative. The letter included references to Amoris Laetitia.

More than 600 people answered Bishop Dominique Lebrun’s call to the “separated, divorced, divorced and remarried” to join vespers of the feast of All  Saints, entering the cathedral through the “Door of Mercy” before moving as close as possible to the altar in “symbolic scenography,” wrote Claire Lesegretain, a journalist for La Croix, a daily newspaper near the French episcopate who covered the event.

The service was aimed at making those who feel “rejected,” those who are “turned back” from the threshold of the Church, feel part of it again, Lesegretain reported.

During vespers, the bishop announced that he had named seven priests as special “missionaries of mercy” in his diocese as a response to Pope Francis’ call at the beginning of the Year of Mercy. The priests were given the “special” task of welcoming divorced persons who are engaged in a new union to help them “examine their conscience, in total confidentiality, thanks to the Word of God.” After the ceremony on November t, writes La Croix, all of the five “missionaries of mercy” present received several requests for appointments.

“The missionaries will listen to them and ask them questions in order to discern and to find out which path to follow together with their parish community,” Bishop Lebrun said.

Lebrun openly stated that Amoris Laetitia considers that “this discernment can allow for the receiving of the sacraments if there is no grave fault and when ‘mitigating factors’ and ‘situations’ diminish responsibility.”

So the bishop of Rouen is clearly stating that certain people who are still validly married there would be no problem as to the reception of the sacraments even if the nullity of the first marital union were not to have been established. In his view, the person can then enter into a new union with “no grave fault” involved.

This goes directly against the words of Christ about the sin of adultery and the indissolubility of marriage, but it does find its place in the new logic, where one looks subjectively at the responsibility for the divorce and the way in which it took place.

While it is beyond doubt that in a divorce the responsibility for the situation is often unequally divided, up to the point where in some cases one of the spouses bears the whole responsibility for the separation, this makes no difference to the reality of the marriage and the vow of fidelity “until death do them part.” Objectively, they are still, or should be, images of Christ’s fidelity to His bride, the Church. That is what they have sworn to in the name of God …

In the letter, Lebrun openly addressed those who are “married before God in the sacrament of marriage, who are today separated, divorced, perhaps remarried or living in a new union.” “I know many of you have the impression that you have been rejected by the community, that you have been condemned,” he added.

He went on to beg forgiveness four times.

“I come to ask your forgiveness: the failure of your marriage has become the failure of a life, perhaps because of the way you are looked at or because of attitudes you face,” he said. “In reality, your divorce is a trial in a life woven by love, which has so many faces and expressions.

“I ask your forgiveness: the indissolubility of your marriage has become a burden that you carry as a condemnation. For you, it was a way of liberty, love and mercy, and that is what it should remain for all.

“I ask your forgiveness: the reminder of the law hits you like the stones that Jesus refused to throw at the adulteress. Yet the law is a way to happiness.

“I ask your forgiveness: the impossibility to receive the sacraments for divorced persons engaged within a new union has become an exclusion. It is and should be a call to welcome you with more charity.”

Lebrun sees the answer to this in Pope Francis’ “appeal to choose the logic of integration,” quoting Amoris Laetitia, which says “no one can be condemned forever, because that is not the logic of the Gospel.”

Having protested that “the Pope does not change the Christian ideal … marriage remains marriage.” Lebrun added, “However, your way remains a way of the baptized called to holiness, as mine is also. It is a call to joyous conversion, to a life ever more united to Christ and not to an illusory perfection. It is a way of growth that is called ‘graduality.’”

Lebrun invites them to join him in prayer on All Saints Day: “We will give thanks for your lives, for all the love they contain. I will bless you in the name of God. (…) I hope it will be a new starting point, and an encouragement.”

Having commended and thanked those who remain faithful to their marriage vows with “audacity and courage,” the bishops speaks of those who have entered into a new union but who continue to come to church without receiving communion. And then:

“Others have decided, in conscience, to receive Communion. They ask themselves (…) what does the community think, and the priest? Is it right?”

The bishop does more than infer that it can be right. “Each situation, each path requires discernment. The Pope is prepared to consider that this discernment can allow the reception of the sacraments, if there is no grave fault. ‘Mitigating factors’ or ‘situations’ diminish responsibility (Nos. 301/2),” the bishop writes.

Lebrun goes on to say the Pope has asked that time be taken for this discernment. He adds: “I hope that this first of November will be a steppingstone toward a new path. Let us not go too fast … nor too slow.”

The wording is cautious, but not cautious enough for an ordinary reader to understand that the bishop is favorable to access to the Holy Eucharist for the divorced who are in an irregular new union, and that he hopes it will be possible for some, if not many. He has acted in this direction himself, albeit more discreetly than last week.

Claire Segrétain writes: “This is the first time that such a celebration, aimed at the ‘separated, divorced, divorced and remarried.’ is made public in a diocese of France. ‘In July 2015, in Saint-Etienne, I invited a dozen divorced and remarried couples who were asking for a blessing to receive it together,’” she quoted the bishop as saying. He felt “called” to “make the situation go forward” upon hearing the pope encouraging to “dare to go down singular ways” in Amoris Laetitia (the words, it should be said, are the bishop’s own and cannot be found in the Apostolic exhortation). But one thing is clear: the bishop of Rouen is sure that he is acting according to the Pope’s will.