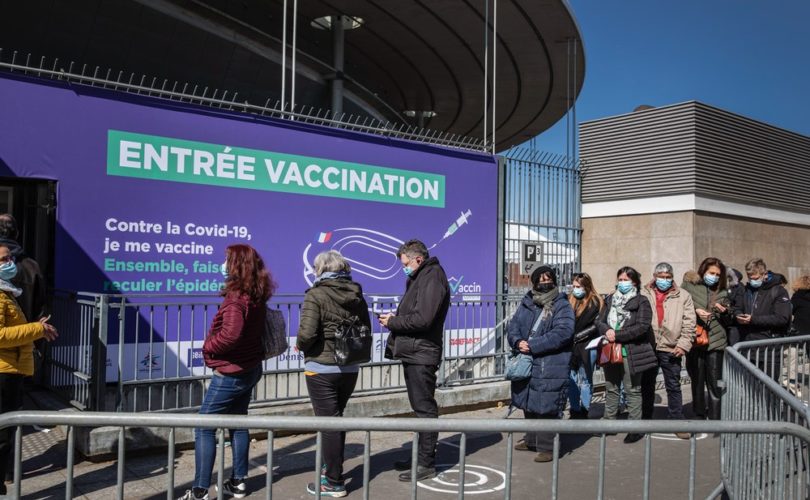 FRANCE, July 15, 2021 (LifeSiteNews) – In a series of tweets on its official account presenting the very short communiqué of the Catholic Church in France, the French bishops made perfunctory comments about Emmanuel Macron’s announcement of what will be to all intents and purposes a coronavirus vaccine pass required for most everyday activities from August onward, if the Parliament adopts the law presently being drafted by the government.

Instead of pointing out the attempt to set up a fully-fledged sanitary dictatorship by way of mandatory inoculation of morally questionable experimental “vaccines,” the French bishops asked everyone to enter the fight against the coronavirus and to “take personal responsibility regarding the vaccine.”

Without going so far as to call on the entire population to get the COVID jab, the leaders of the Catholic Church in France at least suggested that the correct way to join the national effort against COVID was to consider vaccination.

One of them, Denis Moutel, bishop of Saint-Brieuc and Tréguier (Britanny), wrote a follow-up the tweet proclaiming: “To take personal responsibility means to get vaccinated if you haven’t done so already.” Most comments were critical, some energetically so.

Bishop Xavier Malle of Gap et Embrun (French Alps) tweeted this Wednesday: “Let it be known that my account is not a place to display your opinions against the vaccine. So I'm masking those comments. I have been vaccinated – first dose – and am looking forward to the second.”

To date, no statements condemning the vaccine pass have been forthcoming from individual French bishops.

Traditional institutes have kept a low profile on the issue.

Most remarkably, the French bishops have de facto condoned Emmanuel Macron’s Monday evening speech by failing to condemn compulsory vaccination of health workers and the wide extension of the “sanitary pass,” both of which Macron had personally promised would never happen during former declarations to the French citizens.

They have also remained silent about the grave moral issues raised by the four “vaccines” that are at present officially accepted in France: Pfizer, Moderna, AstraZeneca, and Johnson & Johnson. In varying degrees they are all linked to the use of fetal cell lines obtained through particularly heinous abortion procedures. And even though the Congregation for the Doctrine of the Faith has ruled that in case of grave necessity for the protection of lives and in the absence of alternatives such vaccines can be licitly used, the CDF did underscore the need to denounce their manufacturing processes, if only by clear assertion of conscientious objection.

Nor did the operating mode of these shots, which modify the normal operating mode of human cells by tricking them into producing the Spike protein of SARS-CoV-2 in order to promote an immune response, receive a mention. Arguably, modifying the human body in order to make it produce foreign substances is a first incursion into transhumanism, and as such gravely immoral.

As to the dangers associated with the present experimental “vaccines,” they were not mentioned either.

The pastors are leaving their flock out in the open, facing its enemies alone.

The bishops’ statement, entitled: “COVID: after the declaration by the President of the Republic on July 12, 2021,” focused on the fact that the “sanitary pass” will not be required for religious worship.

Following announcements made by the President of the Republic on July 12 concerning sanitary measures, the French Bishops' Conference (CEF) notes that religions and their public practice have not been mentioned in the list of places that will require a sanitary pass for admission.

As a consequence, the CEF considers that the current rules remain valid: the use of hydro-alcoholic gel, the wearing of masks and all other sanitary measures related to the practice of worship.

Out of concern for the common good, the CEF continues to invite everyone to mobilize against the virus.

It calls on Catholics to take personal responsibility regarding the vaccine.

The CEF will remain vigilant, as it has been since the beginning of the crisis, with regard to the respect of freedom of worship.

That last sentence is a lie. During the first lockdown from March 17 to May 11 2020, the leaders of the Catholic Church in France did exactly nothing to obtain access to churches for public worship, while supermarkets remained open throughout the period. When measures were partially lifted, it was only because traditional Catholic associations such as the AGRIF (a French and Christian defense league) and others, and Ecclesia Dei religious institutes took the matter to the French administrative high court, the Conseil d’Etat, and obtained victory. Not a single bishop accepted to add his name to the list of applicants, although some were privately asked to do so by the original applicants.

Considering that these experimental jabs will already be widely necessary to buy and sell, as well as their moral questionability, it is hard not to see this as a prefiguration, at the least, of the ‘mark of the beast’ in France.

Since Macron’s announcements, the government has made clear that places of worship have not been included in the list of places where the sanitary pass will have to be shown. Responding to a request for clarification by Le Figaro, the Prime Minister’s office indicated that “places of worship are not affected by the sanitary pass because they enjoy constitutional protection.”

It is likely that the government wishes to avoid further litigation following the Conseil d’Etat’s ruling regarding the “fundamental liberty” of freedom of worship in May 2020.

But this is sparse comfort in a rapidly unfolding set-up of tyranny of a hitherto unknown form, where supposedly free citizens are being cornered into accepting the injection of a substance whose mid- and long-term effects are totally unknown, and whose adverse effects are reaching totally unheard-of proportions when compared with existing vaccines, even the more controversial ones.

Considering that these experimental jabs will already be widely necessary to buy and sell, as well as their moral questionability, it is hard not to see this as a prefiguration, at the least, of the “mark of the beast” in France.

In practice, insofar as it requires proof of vaccination or COVID-negative status for a large number of venues that will include all cultural and leisure spaces receiving over 50 people as of July 21, followed in August by restaurants, cafés, hotels, commercial centers (very large and large shopping malls), hospitals, homes for the elderly and the handicapped, airplanes, long-distance trains and buses and the like, the new rules will impose vaccination as the only possible solution. Macron has already stated that the list may be lengthened in the face of the extension of new COVID variants, particularly the “Delta” or Indian variant that is extremely contagious (but sends few to hospital and kills only a handful of those infected). Proving COVID-negative status on a permanent basis would require PCR or anti-genic testing every two days, and these tests will need to be paid out of pocket in the absence of a doctor’s prescription in case of symptoms as of October, to the tune of 30 to 50 euro per test.

In new developments, government sources have revealed that under new COVID measures, people testing positive for SARS-CoV-2 will need to observe 10 days’ isolation in the place of their choice, under control of the “liberty and detention judge” ordinarily responsible for the application of prison sentences, with a daily “exit permit” from 10 to 12 a.m., and verification by the police or the “gendarmerie” (a national police force linked to the army).

It has also been revealed that in all venues where the sanitary pass will be required, those in charge will incur a fine of up to 45,000 euro ($53,000 USD) and up to one year imprisonment for failure to check the pass of any individual traveler, guest, or customer.

All workers in these venues will need to show a sanitary pass, meaning that in practice workers in hospitals, cinemas, restaurants, cafés, hotels, transportation, museums, and many others will be required either to test every two days or to receive a COVID-“vaccine.”

All health workers will be obliged to receive a COVID-jab, under penalty of losing their job and unemployment benefits, but on the other hand some professions that were among those prioritized for reception of the “vaccine” last May have been explicitly excluded from the list of those for whom full “vaccination” will be mandatory as of September 15: the police and the “gendarmerie.”

In other words, those who will be tasked with controlling the population’s compliance with the new rules will not be subject to them, perhaps because the government fears massive resignations and will need every hand on deck to keep track of citizens’ every movement.

In a final twist, Emmanuel Macron will be visiting Lourdes on Friday, July 16. The sanctuary’s rector, Bishop Olivier Ribadeau-Dumas, stated on Tuesday that he is “delighted” that the French president has decided to visit the famous shrine – no other French head of state has done so to date. July 16 marks the anniversary of the Virgin Mary’s last of a series of 18 apparitions to Saint Bernadette Soubirous in 1858.

One of the shrine’s priests, Father Cayla, commented: “Even if Emmanuel Macron is not coming for a religious reason, the Virgin Mary knows how to make use of all events. In Lourdes, she made the afterlife glow, she wanted to build the Church there so that it would become a landmark, a rallying sign, a foretaste of eternal life in our society.”

After the adoption of a gravely transgressive bioethics law in June and now the bid to set up a tyranny of control and destruction of individual liberties in a matter of weeks, the question is rather: will the Blessed Mother of God give the leaders in France the courage to resist?