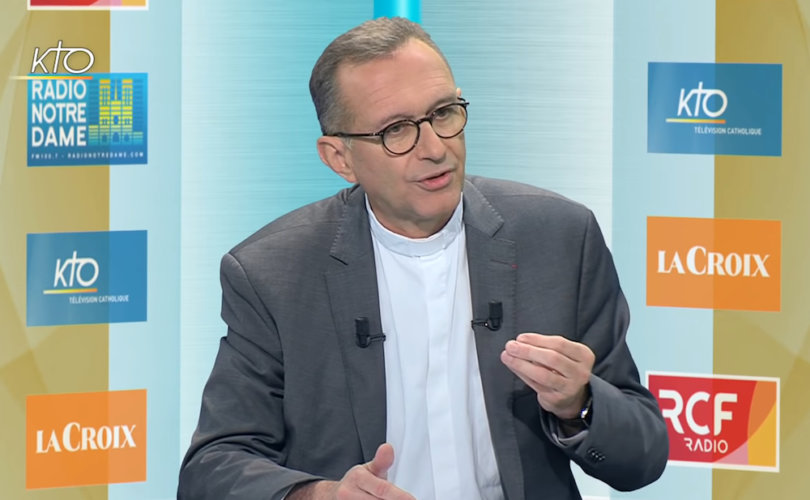 March 28, 2019 (LifeSiteNews) — The secretary general of the French bishops conference says he believes that in every loving human relationship, including those between homosexuals, “something of God” is “speaking”

Msgr. Olivier Ribadeau-Dumas said during a question-and-answer session after a talk for a French Christian group, Devenir un en Christ (Becoming one in Christ), which offers help and support for homosexuals and their families under the motto “Faith and homosexuality.”

Msgr. Ribadeau-Dumas has been secretary general of the French bishops conference since 2013 and its spokesman in January 2015, making him a well-known figure in the media who is seen as giving the Church’s official viewpoint on current affairs.

His talk took place last October for a group near Paris. Its more controversial parts have only now been transcribed by the French Catholic website Riposte catholique. The full audio file of his conference and the questions and answers that followed are available on the website of Devenir un en Christ.

Here is what Ribadeau-Dumas had to say about homosexual relationships:

“I think that in every truly loving relationship something is being said to us about the love of God, whatever that relationship. You know that in 2013-2015 the bishops wrote statements regarding the vote of the ‘loi Taubira’ (as the French law legalizing same-sex ‘marriage’ is called). For the first time, they spoke about homosexual relationships, and the loving relationship between two people of the same sex, saying that there was something of God speaking there. I am deeply convinced of that. I am deeply convinced. I don't know what is said, I don't know, but I know that if God is love and that if two people truly love each other, then there’s something linked to that, necessarily. As in every human relationship there are imperfections, in every human relationship; in the love between a man and a woman, as in love between two beings of the same sex. But I believe there's really something that is being said about the love of God in them. That it should be perfected, that it should always be necessary to purify it is always true; that egoism should be left to one side is always true. But true love is a love that is self-giving, a love that forgives, that goes even further in perfect giving, that refuses to lock the other up in what he or she has done. A love that goes so far as to give its life for the man or the woman who is loved, that love cannot not be telling us something about the love of God for us. So I think we have to be very conscious of all that, with all that it means regarding a responsibility of permanent conversion so that God penetrates and purifies that love ever more. So happiness is for you today. Because if happiness was for tomorrow – you know the theory of the evangelicals who lure us today with the idea that the poorer you are today and the more dough you give to your pastor and church the happier you will be later, well I don't like that too much – I rather feel like living in the plenitude of love right now.”

Surely this long and rather confusing answer can be read in different ways, but Msgr. Ribadeau-Dumas made himself clearer toward the end of his talk, explaining that thanks to the debate about same-sex “marriage” in France between 2013 and 2015, attitudes toward homosexuals in church have changed. “From an evil came a good,” he said.

He added that he hoped that soon homosexual persons would be accepted in parishes, not in particular groups but just as ordinary parishioners joining in all the normal parish activities.

“I remember two friends whom I love very much, two men who are married and who have a little girl and who said to me: ‘We went to the feast of St. Valentine at the parish and we got thrown out.’ I told them: ‘Yeah, you’re nice guys, aren’t you, but maybe you should've told the priest, do you think we can go to St. Valentines,’” Msgr. Ribadeau-Dumas said. “I understand that you can have been hurt, but I also know that there is a time for everything, as the Ecclesiastes puts it.

“Things are moving forward, we just have to give them time. I understand how impatient you are, but let's give them time. It's reassuring after all that progress has been made and that there will be other steps forward. In the heart of the Church be love, to love her, and from within, help her to move forward towards that love, that recognition, that love.”

Msgr. Ribadeau-Dumas used the expression, “In the heart of the Church, be love,” several times in his talk. It is a direct quote from the writings of St. Teresa of the Child Jesus, who defined her religious vocation with those words.

The spokesman of the French bishops conference also had things to say about sin.

In a questionable formulation, he proclaimed, “Nothing will be able to separate us from the love of God manifested in Jesus Christ. That is something you have to hold onto, my friends. Nothing can separate us. Not even sin! Not even sin because sin is made to be forgiven!”

While it is true that God in His mercy can forgive even the worst of sins, provided we repent and ask forgiveness, sin in itself does precisely this: mortal sin separates man from God's grace.

Later in the talk, Ribadeau-Dumas said: “ I remember someone who came to see me: he was married, and he had a mistress, and he said to me that it was out of the question that he should leave his mistress, and in strict orthodoxy I should have said to him: ‘Well, listen, sir, as you don't want to leave your mistress, I cannot forgive you.’ Maybe that's what I should've told him, but what would Jesus have done?

“And I say to myself, if this man comes to tell me that, it's that he’s quite conscious that there's something wrong with his life. The pardon that is given us is not the point of arrival of a process, it's a force to help us move forward and it is perhaps this pardon, together with other pardons, that will perhaps let him discover one day that something better could be on the way.

“Of course, there are sins and sinners, and then there's the attitude of the person who admits he's weak, that he would like to move forward but can’t. And then, who am I to judge someone who is seeking God. The worst would be to resign yourself to not receiving God's pardon, in saying: ‘I can't change, I can’t receive God's pardon.’

“Yes, you can always welcome God's pardon! You can always let yourself be picked up again. But what does conversion mean? Before being moral, conversion is following Christ. I'm not sure that you first convert by posing moral acts: you convert firstly by looking at Christ. By following Him, by picking up one's cross and accepting for him to lead us where we would not go.”

Behind the bland and positive approach lie moral relativism and situation ethics.

The Devenir un en Christ group presents a relativist reading of the Bible and Christian morals, referring to the episode of Sodom and Gomorrah as nothing more than the condemnation of rape and not of “consensual” homosexual relations. As to St. Paul’s condemnation in 1 Romans 18:26-27, it is presented as linked to a time in Antiquity when “homosexual attitudes existed but were considered in a context of general heterosexuality,” making them “appear abnormal.” For Paul, the group’s explanatory document says, “they illustrate the impiety of the pagans.”

Along the lines of the Dominican Father Adriano Oliva, the group’s idea is to say that homosexuality was not until recently understood as the manifestation of a person’s “unchosen orientation”: “In the past, the texts of the Church, founded on biblical texts mentioning homosexuality, in reality only spoke of homosexual acts committed by people who were presumably heterosexual, in the context of rape, idolatry or depravity but never in the context of an emotional bond.”